Colombia Must Not Submit to Marxist Terrorism
Skip to content 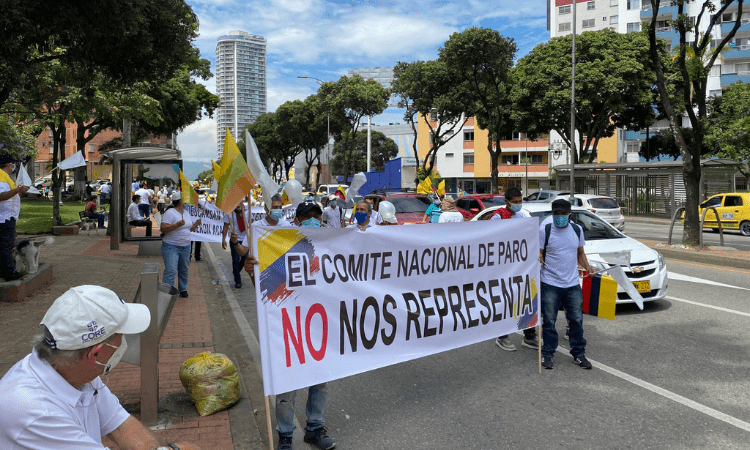 Whatever Colombia’s shortcomings may be, terrorism and Venezuela-style policies are not the answer. (EVERSTRONG)

When the Colombian government granted amnesty to narco-terrorists, ignoring voter rejection in a referendum, it sent a perilous message. Not only did the deal with the Revolutionary Armed Forces of Colombia (FARC) undermine the rule of law, it rewarded decades of barbarism.

The message was that violence works. Colombia should have granted no quarter in 2016 to terrorism, and it should grant no quarter now.

Unsurprisingly, the Marxists never left and are more emboldened than ever. Since April 28, the terrorists and their ideological brethren, supported by the narco-dictatorship in Venezuela, have hijacked public opposition to a tax-reform proposal. The withdrawn reform, which would have broadened the income-tax base and raised the dividend tax, was an unpopular nonstarter. However, enemies of the struggling president seized on it as justification for anarchy and a coup d’état.

Savages have injured more than 1,000 police officers, blockaded cities such as Cali, and committed countless acts of property damage and theft. The so-called protests, as Juan Forero and John Otis write in the Wall Street Journal, are “the most sustained and violent that this close US ally has seen in decades.” This coalition, fronted by socialist-inclined unions, includes the dissident FARC, the National Liberation Army (ELN), and unelected indigenous defense networks that oppose the police and military.

Even with the backdrop of widespread organized crime, legacy media, foreign NGOs, and progressive diplomats are pointing the finger at police violence as the problem. The most prominent incident occurred when Marcelo Agredo of Cali fly kicked a police officer from behind. The officer immediately opened fire as Agredo turned and ran away and killed him. Prosecutors have charged the officer, and President Iván Duque has backed zero tolerance for police brutality.

The institutions and individuals still condemning the Colombian government have revealed their ideological blindspots and affinities. They are unwilling to face up to the reality that Colombia is, as a matter of survival, pushing back against foreign-backed terrorists. They have perverted constituent frustrations and fomented direct confrontation.

Getting cutesy with them will achieve nothing. Any agreements with the self-proclaimed strike committee—who initiate violence and then pretend to be victims—are a mistake. The terrorists and rioters, as noted by James Roberts of the Heritage Foundation, “are eroding Colombia’s democratic stability and allowing drug trafficking to flourish.” Colombian Senator María Fernanda Cabal, who is originally from Cali, points out that no one elected these bullies.

Interrupting the democratic process, while profiting from contraband, is precisely the Marxist coalition’s intent, as it has been for more than half a century. They know their broad socialist agenda cannot cut the mustard with voters. How could it? Colombians need only look to their neighbor to the east to see the misery that comes from 21st-century socialism in the tradition of Fidel Castro and Hugo Chávez.

Many of the Colombian poor and middle class, those who have engaged in peaceful protests, are victims of what Joseph Humire describes as “asymmetric warfare by adversaries.” His situation report with the Centre for a Secure Free Society reveals the depth of foreign involvement, especially from the Chavista regime in Venezuela. It has been working with narco-funded guerrillas that organize attacks and troll centers that spread misinformation.

The regime intends to expand both its borders and sphere of influence. On May 5, in fact, its official defense ministry account tweeted an 18th-century colonial map of a broader Venezuela.

In addition to violating the rule of law and Colombia’s sovereignty, cowering to this hijacked movement would be an economic disaster. The irony is that the cost of the strike committee’s demands—a socialist and progressive grab bag that includes universal basic income—would be orders of magnitude greater than the original tax reform.

On a Marxist sabotage mission, they plan to pay for it with modern monetary theory, spending Colombia’s foreign reserves, and by defaulting on the nation’s debt. You could hardly imagine a swifter route to hyperinflation and Latin America-style neofeudalism. When a government pays its bills by printing money, those on fixed and subsistence incomes suffer the most. Those with real assets and mobility can ride out inflationary periods.

Whatever Colombia’s shortcomings may be, and there are plenty, terrorism and Venezuela-style policies are not the answer. Only with the rule of law and stability can Colombia attract foreign investment and grow in a healthy, sustainable manner. Those using intimidation rather than the democratic process to get their way have no legitimacy. They deserve punishment, not keys to the nation.