Why Cuban Americans Voted for Trump
Skip to content 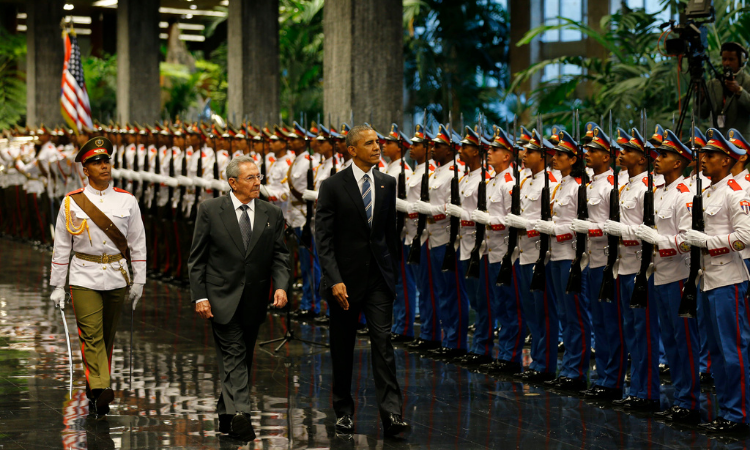 In 2016, it was Obama, not Trump, who went to Cuba and traded a playful wave at a baseball game with Raúl Castro. (Cubadebate)

As soon as the Miami-Dade election numbers came in, major US media and apologists for the Cuban regime—the two groups largely synonymous—hurried to find a politically acceptable explanation.

Instead of looking at rational factors like foreign and domestic policies, the pundits went straight for pop psychoanalysis. Cuban Americans were ‘gullible’ and ‘brainwashed’ people who had fallen for ‘misinformation’ and ‘scary rhetoric.’

Really? We know that ‘progressives’ resort to personal invective when they lack valid arguments in defense of their positions. In this case—and not for the first time—mainstream analysts went way over the line, and into the domain of bigotry.

The thing that progressives refuse to admit about us is quite simple. What sets Cuban Americans apart is our firsthand experience. We cannot be manipulated by arguments about communism because we have lived communism. What horrifies us is the way in which many Americans—pundits especially—underrate the depravity of it.

For decades, the main feature of presidential campaigns in Miami-Dade has been the stock photo image of candidates drinking Cuban coffee and uttering “Viva Cuba Libre” to emotional crowds. Not for years have we seen a candidate who actually believes the slogan and understands its importance to the security of the United States—including freedom for Venezuela and Nicaragua and safeguarding democracy in Chile, Colombia, and elsewhere.

In 2020, we needed a candidate who would take the necessary actions in dealing with a criminal regime 90 miles away. The Cuban regime’s ambitions are not limited to Cuba. Cuba’s leaders, among the world’s nastiest, crave the utter destruction of the United States and all it stands for. President Donald J. Trump was the candidate who clearly understood that; and with Vice President Mike Pence, he proved it.

They called out the criminal regime in Cuba for what it was—and they took the corresponding actions. They enacted long-overdue articles in the 1996 Cuba Libertad Act. They exposed foreign enterprises that were acting as fronts for the Cuban regime, financially underwriting its repression and domination.

The Trump administration, unlike those before it, took effective steps towards achieving freedom for Cuba, Venezuela, and Nicaragua. It blocked the communist advance in other countries; and it procured long-overdue justice for political criminals who had violated human rights. The likelihood is that Cuba’s criminal regime would not have survived a second term of Trump’s presidency.

Last month, former President Barack Obama made a campaign stop in Florida for the Biden-Harris ticket. Obama stated that dictators wanted Trump’s victory because he gave them everything. It was Biden—or so the former president claimed—who would not coddle dictators. “Joe will restore our better standing around the world because he knows our true strength comes from setting an example that the world wants to follow—a nation that stands with democracy, not dictators.”

If Obama thought Cuban Americans would fall for that, he was wrong.

In 2016, it was Obama, not Trump, who went to Cuba and traded a playful wave at a baseball game with Raúl Castro. It was Obama who wanted to give the dictatorship everything in exchange for nothing. It was Obama who brought his family to the imprisoned island, putting on a priceless public-relations campaign to humanize a monstrous regime and its crimes against humanity.

What type of example did that set before the rest of the world? How about its message to the regime’s victims and their families?

Instead of giving justice to the criminal Cuban overseers, Obama handed them the imprimatur of the United States. Maybe that’s why prominent human-rights activists inside Cuba, along with Cuban Americans in Miami-Dade, were for Trump and his approach to Cuba.

In Cuba as in America, Cubans are not the gullible ones. We know very well that actions speak louder than words.