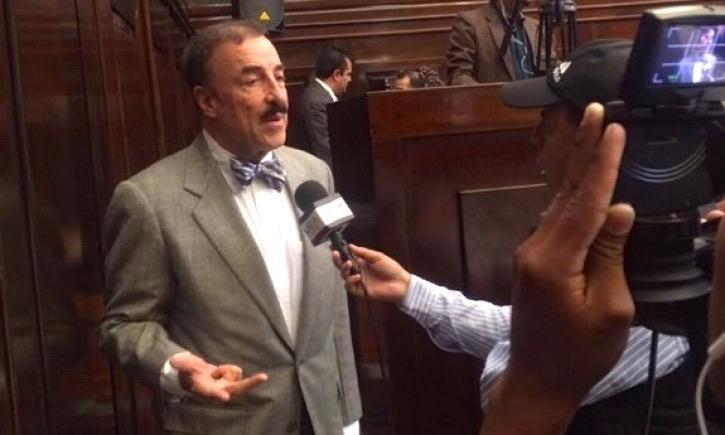 Congressman Fernando Linares Beltranena in the National Congress of the Republic of Guatemala. (@FLinaresB)

I congratulate and thank the Impunity Observer for its insightful reporting about Guatemala. US Secretary of Homeland Security Kelly was here on February 22. He gave a statement telling Guatemalans they would be wasting their money paying coyotes, because they will be turned back by the new policy of the Trump administration.

We hear very little, if any, news about immigration now, because news here is dominated by the topic of constitutional reforms pushed by the US embassy and the UN-named commission, Cicig. Their proposed illegal indigenous “reforms” are a legal nightmare that would make the country ungovernable. They are mostly a distraction from US Ambassador Todd Robinson’s real objective: to change the way magistrates are selected.

Radicals lost the reappointment of Obama-supported former Attorney General Claudia Paz y Paz because they couldn’t convince the law-school deans to support her, a majority of the nominating commission. The “reforms” would remove the deans, university presidents, and the Bar Association from participation in nominating magistrates and create a new structure under the control of magistrates. If approved, the new process would permit current magistrates to perpetuate themselves in power, assuring radical collectivists of being able to block any changes the executive and legislative branches might make to bring law and order to the country, which the radicals expect Trump to support.

The US ambassador and the UN commissioner have been threatening members of Congress and influential people in the private sector with criminal investigations and US visa problems if they oppose them. They are working vigorously to undermine Trump before he can pay attention and act.

An example of the propaganda is the circulation here of a photo of Secretary Kelly shaking hands with Cicig Commissioner Iván Velásquez, while Ambassador Robinson observes. I understand that Robinson was responsible for the introduction of Kelly to Velásquez, apparently to support the spin now circulating here that the Trump administration supports Robinson and the Cicig on everything they do and that nothing will change. If the Trump administration were to learn that the Cicig has violated its mandate and the law to the detriment of Guatemala and the United States, under the influence of Robinson, I have no doubt they would remove the ambassador and limit Cicig, of which the US is the principal contributor and political supporter.

I understand that the United Nations wants to promote the creation of Cicig-type commissions in many other countries. Hopefully, attention to it by the Trump administration could save these countries from harmful UN intervention that imposes its globalist political agenda through control of criminal prosecution while concentrating power and violating due process. Some of Cicig´s fights against corruption were positive in the beginning, but comfortable with this success, the UN institution turned to impose its brand of political activism.

All of this pushes the issue of immigration to the back burner.

Our minister of foreign relations tells me there are 3 million Guatemalans in the United States, 800,000 of whom are undocumented. Under Trump policies, we can expect many of them to be repatriated. I believe our executive and legislative branches would like to work with Trump to reduce the incentive for Guatemalans to leave and prevent foreigners from passing through our territory on their way to the United States. This can be done by instituting a respect for our Constitution and the rule of law, something not done by the unchanged Obama policy of the US government.

It’s a squeeze. On one side, as Guatemalans are deported from the United States, we lose remittances, our largest source by far of foreign exchange, and we have more people seeking employment. On the other side, as members of the executive branch of our government, imposed by the Obama administration, protect radicals who violently attack businesses, such as hydroelectric plants and others; and as magistrates, also imposed and promoted by the Obama administration, issue illegal rulings to block their operations, costs of living will rise and we will have less investment and fewer jobs.

Ironically, on the same day that Secretary Kelly issued his statement about paying coyotes, Juan Pablo Carrasco, president of the American Chamber of Commerce, stated, “As a direct result of the [Constitutional Court’s] rulings, more than 445,000 jobs and more than $780 million in annual tax revenues are at risk.”

The delay by Senate Democrats in approving executive appointments has given Obama holdovers throughout the government an opportunity to damage Trump’s ability to make changes he has promised. This is precisely what’s happening here to the detriment of our country and to the United States itself.