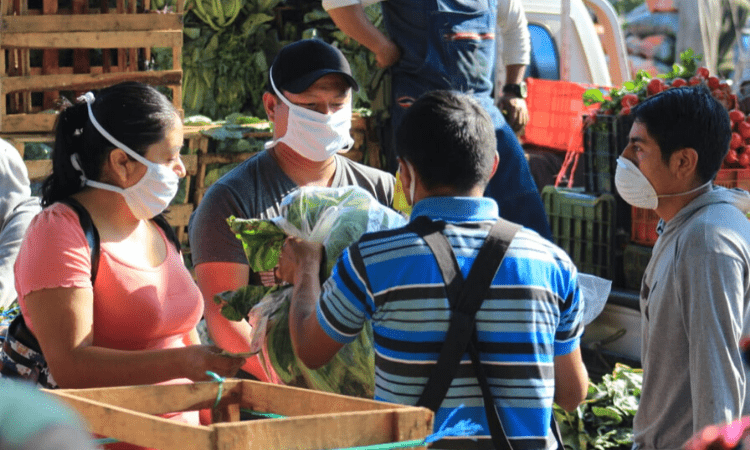 All the COVID-19 emergency packages will cost Guatemalan taxpayers US$1.42 billion. (MAGA Guatemala)

The COVID-19 outbreak hit Guatemala, a poor and populous Central American country, early and hard. Local authorities detected the first infection on March 13, imported from Italy. As of April 27, 530 people have contracted the disease, and 15 have died.

The administration of Alejandro Giammattei ordered a national lockdown on March 16, although small businesses could still operate under limited conditions if they provided transportation for their employees. Both public and private social events remain banned. On April 26, Giammattei announced that the lockdown and an evening curfew from 6 p.m. to 4 p.m. would continue until at least May 3.

What has been the economic impact of the CCP virus?

In 2019, Guatemala’s GDP PPP per capita stood at US$7,606 according to the International Monetary Fund. Thanks to her exchange-rate stability, Guatemala has achieved upper-middle-income status, unlike her southern neighbors El Salvador, Nicaragua, and Honduras. However, over 70 percent of the workforce operate in the underground economy, and 13.8 percent of GDP hinges on remittances from migrants working mostly in the United States.

In late March, the Association for Investment, Innovation, and Entrepreneurship in Guatemala (ASEGUA) carried out a survey of 1,000 Guatemalan entrepreneurs on the government’s containment measures. It revealed:

In early April, the Coordinating Committee of Agricultural, Commercial, Industrial, and Financial Associations (CACIF) conducted a survey of 505 businesses, with the following results:

A study conducted by the Guatemalan Tourism Institute (INGUAT), the Chamber of Tourism of Guatemala (CAMTUR), the Guatemalan Exporters Association (AGEXPORT), ASI Strategies, and the Association for Research and Social Studies (ASIES) estimated that tourism in Guatemala will fall by 45 percent in 2020, the equivalent of $562 million in lost income. Almost 180,000 industry jobs are at risk.

In addition, 60 percent of hotels have suspended operations, and occupancy rates have plummeted to 5 percent. If the crisis continues, only 6 percent of hotels would be operational by June 2020, according to another study carried out by ASI Strategies and ASIES.

The World Bank recently revised its estimate of Guatemala’s GDP growth for 2020 from 3.6 percent to -1.8 percent.

What are the main features of the unemployment subsidy?

On April 8, the Guatemalan Congress passed the Law of Economic Relief to Families due to the Effects of COVID-19. It creates, among other stimulus packages, the Fund for the Protection of Employment with the aim of funneling aid to furloughed private-sector workers.

The fund, totaling GTQ2 billion ($259.4 million), grants authorized beneficiaries around $300 per month. This stipend is exempt from deductions, withholding fees, and taxes. To qualify for the benefit, workers must have a job contract and be registered with the Guatemalan Social Security Institute (IGSS). Additionally, employers must inform and get the authorization of the Labor Ministry to suspend job contracts.

What is the expected burden on public finances?

Besides the unemployment subsidy, the Guatemalan government is also rolling out a GTQ1,000 ($130) bonus per low-income household and three credit lines totaling GTQ3.75 billion ($487 million) for independent workers and businesses.

The entire COVID-19 emergency packages will cost GTQ11 billion ($1.42 billion), which the Guatemalan government will finance through the placement of bonds to be bought by the country’s own central bank—quantitative easing.

Even though the 1993 constitution prohibits the central bank from purchasing government bonds, it grants an exception “in cases of catastrophes or public disasters.” This creates the possibility of inflation in the future.

Who was behind the proposal?

The initial proposal of GQT10 billion ($1.29 billion) sought economic compensation for workers in the formal economy suffering from furloughs or layoffs, as well as for informal-economy workers.

However, Guatemalan legislators finally left out informal workers from the relief package.

Critics to the Fund for the Protection of Employment

Economists and think tanks have focused their criticism on the financing of the unemployment subsidy and other measures in the stimulus law.

Lizardo Sosa, an economist and former director of Guatemala’s central bank, has criticized the government’s decision to resort to quantitative easing rather than borrowing. “There are enough national and international sources of financing to cover the desired amount,” he wrote on his Twitter account. According to Sosa, inflation will appear as the new money ripples across the market.

UFM Market Trends at Francisco Marroquín University is also opposed to the financing strategy. Economic professors Olav Dirkmaat and Daniel Fernández warn GDP could fall by 16 percent in the second quarter of 2020, triggering one of the country’s worst economic crises.

“The Guatemalan economy is much more indebted today than in 2008. The cause is excess liquidity in quetzales. Guatemala’s central bank is in part responsible for this indebtedness, since with its monetary interventions it has promoted a marked reduction in the interest rates on loans in quetzales.”

On April 3, Fitch Solutions downgraded Guatemala’s sovereign rating from BB to BB- due to lower economic growth and fiscal revenues, as well as the rating of several banks and foreign-related companies.