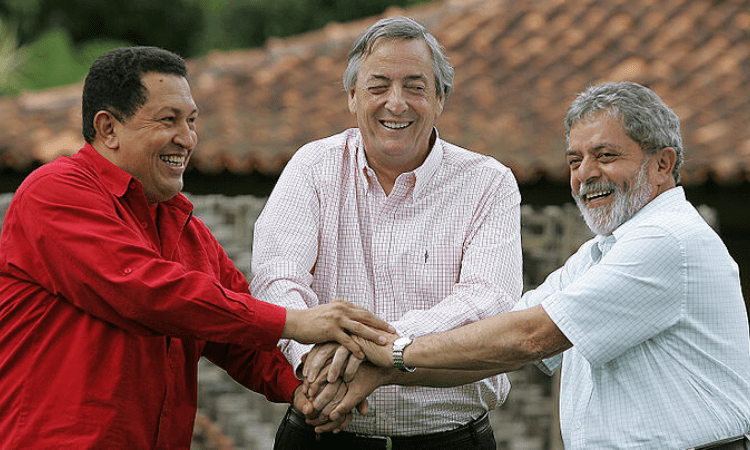 The São Paulo Forum is a big-tent conference of over 100 Latin American and Caribbean socialist political parties and movements. It has been held annually in a different country since 1990 and serves as a platform to garner support for socialist causes and discuss political strategies. The latest meeting took place in Caracas, Venezuela, in July 2019.

The Brazilian Workers’ Party started the Forum at the request of Cuba’s Fidel Castro. At the time, socialists perceived the Berlin Wall’s fall as a watershed moment for their ideas and political clout. Of the members at the outset, only the Communist Party of Cuba was in power. A pink tide then swept Latin America, beginning with Hugo Chávez’s election in 1999. Lula da Silva, a union leader and founder of the Forum, became Brazil’s president in 2003. Other notables included Michelle Bachelet in Chile (2006), Evo Morales in Bolivia (2006), Daniel Ortega in Nicaragua (2007), Rafael Correa in Ecuador (2007), and Cristina Kirchner in Argentina (2007).

Even though left-wing activists and political leaders have used the Forum to propose a common agenda, they have rejected drafting public manifestos and political-action plans. This has been the case since the beginning to avoid infighting among the moderate and radical factions. Instead, every year the Forum reaches a consensus on a set of values and priorities in the publicly available final remarks. The Forum also issues statements on specific events and political developments.

The Strategy: Undermine Rule of Law

For Kurt Weyland, a professor of Latin American politics at the University of Austin-Texas, the main driver of 21st-century socialism in Latin America was Venezuela’s Hugo Chávez. In a 2013 paper published in the Journal of Democracy, he argued like-minded neighbors followed Chávez’s script to take over democracy from within:

“Chávez . . . turned his strategy of constitutional reform into a script that other populist-leaning left-wing leaders followed . . . [:] use plebiscitarian mass support in order to transform established institutions, dismantle checks and balances, concentrate power in the hands of the president, and promote immediate reelection. Like their Venezuelan role model and generous patron, Evo Morales in Bolivia,  Rafael Correa in Ecuador, and Manuel Zelaya in Honduras (till he was stopped) called for constituent assemblies with the aim of boosting the presidency’s powers and paving the way toward indefinite reelection to that office.”

“Chávez and his friends used populism to entrench their predominance and install competitive authoritarian regimes. . . . Populism revolves around personalistic leadership that feeds on quasi-direct links to a loosely organized mass of heterogenous followers. Bypassing or subjugating intermediate institutions such as firmly organized parties, the leader—often a charismatic figure—establishes face-to-face contact with large numbers of citizens.”

“They have applied discriminatory legalism and its maxim ‘For my friends, everything; for my enemies, the law!’ As populist chief executives have commandeered all major institutions, including the courts, they have used formally legal authority in discretionary ways to promote their cronies and allies while punishing or intimidating critics and opponents in politics and society. . . . Seeing how discriminatory legalism has served to entrench competitive authoritarian rule in Venezuela, the leftist presidents of Bolivia, Ecuador, and Nicaragua have followed suit and imitated Chávez.”

The Consensus of Our America (Consenso de Nuestra América) is the document that gets the closest to an official political program. Released in 2017 by a São Paulo Forum working group in Nicaragua, it recommends policies for socialist Latin American parties. Some key points, as described by the socialist working group, are:

As in each gathering, the July 2019 conference built on starting points contained in the “base document.” Prepared by the host organization, the ruling United Socialist Party of Venezuela, it calls attention to recent topics such as:

Following Hugo Chávez’s death in 2013 and Venezuela’s economic deterioration, the Forum began to fragment. Internal disagreements led to the gradual distancing of its members, notably on the matter of democracy under Venezuelan strongman Nicolás Maduro. Key leaders and parties such as Evo Morales and Mexico’s Party of the Democratic Revolution failed to attend the July 2019 meeting. Fewer than half of the expected delegates traveled to Caracas.