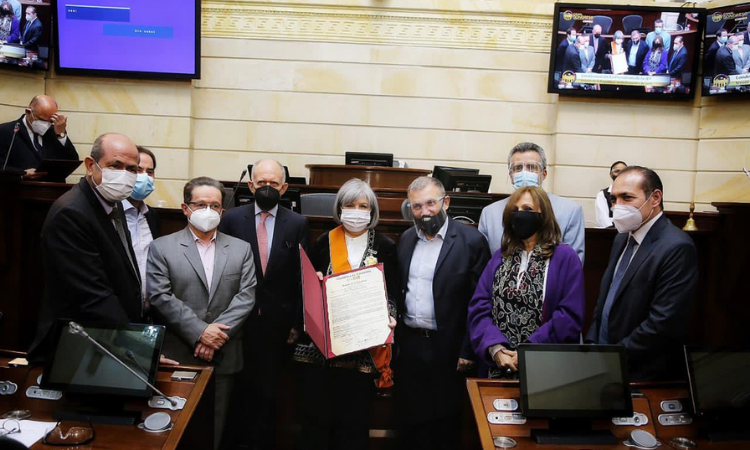 The Colombian Congress awarded a prize to Patricia Linares, former president of the JEP, on December 10, 2020. (Antonio Sanguino)

Far from rehabilitating former guerrillas, the controversial peace accord signed between the Colombian government and the rebel group FARC has paved the way for impunity and a Marxist takeover of the country.

A special legal regime created to demobilize combatants, called the Special Jurisdiction for Peace (JEP), has opened a can of worms. Since the signing of the accord in 2016, the Colombian left has been weaponizing the JEP courts, which offer privileges such as no-prison sentences to cooperating former guerrillas and army officers.

The most recent example comes from a report released by the Colombian Attorney General’s Office on December 15. It reveals that former FARC members have been selling JEP privileges to other organized-crime leaders.

The report includes the transcription of a phone call disclosing ties between former FARC commander Rodrigo Granda and Viviana López Calle, the head of an arms-trafficking organization.

The report suggests that Granda, who had previously denied any relationship with López Calle, maneuvered to include her in the list of former FARC combatants, even though she had never been one.

Granda is not the only one taking advantage of the peace agreement, which the Colombian Congress passed in 2016 despite being rejected by a majority of Colombians in a referendum.

Leftist politicians and JEP officials are trying to undermine drug-trafficking charges against Jesús Santrich, a former FARC rebel turned congressman (FARC became a political party in 2017). Santrich lost his seat in Congress this year after being caught smuggling cocaine and fleeing to Venezuela.

In 2018, Colombian authorities recorded conversations between Marlon Marín, the nephew of an active FARC commander, and Santrich. They were discussing a US-bound drug delivery to Mexico’s Sinaloa cartel.

In a joint effort with Colombian authorities, US Drug Enforcement Administration (DEA) officers posed as Mexican drug traffickers to arrange the delivery of 10 tons of cocaine by Santrich.

The deal went ahead—and Santrich automatically became an outlaw of the JEP.

In April 2018, the Colombian police arrested Santrich at the request of the US embassy pending extradition for trafficking charges. Santrich claimed innocence and went on a hunger strike.

Inexplicably, the JEP declared the accusation lacked evidence and set Santrich free in mid-2019. He then escaped to Venezuela, where he has been hiding since under the protection of dictator Nicolás Maduro.

The Colombian left, for its part, gives Santrich a political and media cover, claiming the operation was illegal.

Iván Cepeda, Gustavo Petro, Roy Barreras, and Antonio Sanguino—congressmen with the FARC and Colombia Humana parties—are trying to convince Colombians that intelligence offers entrapped Santrich. Nevermind that the operation complied with both countries’ laws and no legal challenge has overturned them.

The evidence is there for all to see. Marlon Marín, who was extradited to the United States in April 2018, testified that he and Santrich coordinated the drug delivery to the Sinaloa cartel. He also confirmed it was Santrich speaking in the recordings discussing the deal that Colombian authorities found in 2018.

The attempts to whitewash Santrich defy logic. FARC sympathizers argue the DEA and the Colombian attorney general conspired to entice the former rebel to send tons of cocaine to the United States.

According to Gustavo Petro and Iván Cepeda, Santrich met the undercover DEA agent to discuss poetry and his new book’s launch. However, the recording straight from the horse’s mouth is enough to dismiss the entrapment argument.

As for Marín’s testimony in the United States, Santrich’s apologists dismiss it as an alleged scheme by conservatives to destroy the peace accord. They now brand Marín a traitor.

Santrich’s strategy is a well-known leftist ruse: dragging the case out of court into the realm of politics. Marxist leaders can then take advantage of their media allies and get public opinion on their side.

Make no mistake; the Colombian left is not after peace. Its objective is to undermine republican institutions and the rule of law. This has been clear since the former President Juan Manuel Santos administration imposed an agreement Colombians could not say no to. Anyone with the courage to point out its failures has been labelled an enemy of peace and, consequently, a threat to national security.

For lawyer Jaime Arizabaleta, “Few times have the notorious Communist takeover strategies been so well applied as in present-day Colombia. Thanks to the pact between Santos and the FARC, the country not only now has an armed and political FARC but has to deal with a growing FARC within the National Protection Unit,” a government body tasked with protecting demobilized rebels.

For decades, Marxist guerrillas had attempted to infiltrate Colombia’s judiciary and police. The FARC, blessed by the political establishment as one of them, has entered through the front door.

Socialist leaders, JEP officials, and FARC members have turned the Colombian judicial system into a political spectacle, distorting facts to ensure impunity for their friends and keep the booming cocaine industry intact. Colombians must wake up to the charade and demand full accountability and transparency before the unholy alliance of socialism and organized crime take control of their country.

Paula Gaviria, based in Colombia, contributed to this article.