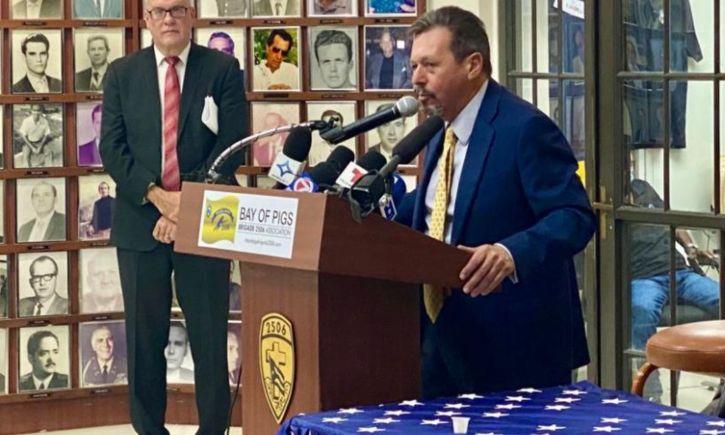 Cuban military officers who break with the Castro regime and “side with the people” as a response to the popular uprising that started on July 11 on the island could receive homes when “Cuba is free.”

That promise was made publicly by the Cuban American businessman Sergio Pino, owner of the construction company Century Homebuilders. He made it during an event in the Miami headquarters of the Bay of Pigs Veterans Association: Brigade 2506, a commando unit that tried to overthrow Fidel Castro in 1961. The Assembly of the Cuban Resistance (ARC) convened the event.

Pino said his proposal calls for the Cuban military “not to repress the people and to help overthrow the dictatorship” with the assurance that once Cuba is ruled by a democracy again, “we will go there and build them their homes.”

The businessman has 30 years of experience in south Florida’s development industry. He has also been a “prominent business and civic leader” who has supported the activities of the ARC “for many years,” according to ARC leader Orlando Gutiérrez-Boronat.

For Pino, the Cuban military “plays a very important role” in achieving the freedom that the Cuban community demands. “We ask you to turn around your weapons, to protect the people, to do the right thing, because we will welcome you with open arms,” he said.

The businessman stated: “Even if it’s the last thing I do, my family and my company make this commitment” to achieve “a free Cuba.”

Pino said that Cuba is undoubtedly going through a “historic moment. We need the military to end the dictatorship.” He celebrated the Cuban people’s bravery to take to the streets and demand freedom.

Johnny López de la Cruz, a retired colonel and president of Brigade 2506, argued there are “signs of rupture” within the military ranks that support the dictatorship, after the death of six generals in recent weeks.

“How can it be that, over a period of around a week, six generals have died suddenly without any explanation and were cremated and buried immediately?” he asked.

López de la Cruz concluded by saying that, “if I were in the Cuban armed forces, I would be very worried now. I think they are purging their ranks somehow.”

For his part, Gutiérrez-Boronat said that “while Cuba needs to be rebuilt, the military has an important role in that reconstruction.”

On July 11, residents from over 40 Cuban cities took to the streets to demand freedom amid  growing repression by the regime and increasing contagion and deaths from the COVID-19 pandemic.