Something Is Rotten in the OAS
Skip to content 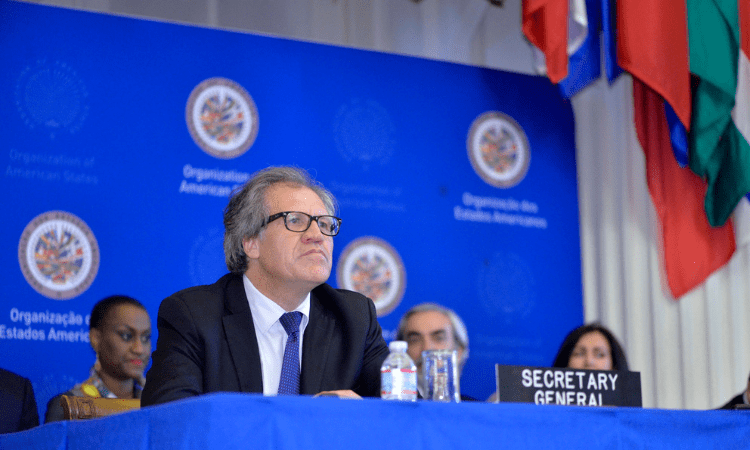 With no binding powers, the OAS has plunged into weak leadership and unassertive actions. (Flickr)

One of the leading and oldest international bodies in the Western Hemisphere, the Organization of American States (OAS), has failed once again to live up to its democratic ideals. Rather than condemning the brutal repression of protests in Cuba, the OAS has deflected responsibility from the Communist regime.

On July 28, more than a dozen member states refused to attend an OAS meeting to address the social unrest in Cuba over recent weeks. They argued that the US embargo was to blame for everyday Cubans’ hardships—not the island’s centrally planned economy.

Like many other institutions based on majority rule, the OAS has been co-opted by an antidemocratic faction. Caribbean countries repeatedly join forces with Venezuela and other authoritarian regimes to override democratic accountability.

At the behest of the US government, the OAS suspended Cuba back in 1962 after Fidel Castro’s uprising. The last time the OAS convened a meeting to discuss Cuba was in 2009, during Obama’s rapprochement strategy, when it voted to lift the suspension. However, the Communist regime passed on the offer and remained shielded from international scrutiny.

In July, Cuba allies thus lambasted the OAS, arguing the meeting would be illegal and unproductive. Cuban Foreign Minister Bruno Rodríguez also took the stage and accused the United States of pressuring OAS members to sign a letter condemning arbitrary arrests on the island.

To reschedule the meeting, the OAS obtained an opinion from legal counselors affirming the OAS had the authority to address the situation in Cuba because it never formally withdrew from the regional body.

Although the legal opinion validated the initiative, the damage was done. More importantly, the occurrence illustrates the OAS has multiple structural and political problems, including lack of cohesion and will to cooperate, undermining its mission.

The OAS, founded in 1948 as a Cold War tool to halt the expansion of Communism in the region, has lost its north in recent decades. It has been unable to stop the march of Marxist takeovers in key countries such as Venezuela and Nicaragua.

For example, the dialogues the OAS has brokered over the years between the Maduro regime and the Venezuelan opposition have gone nowhere. The anti-corruption commission it tried to set up in El Salvador, akin to the United Nation’s CICIG in Guatemala, was disbanded. In Ecuador (2017) and Peru (2021), the OAS has backed dubious presidential elections.

Leftist regimes have attempted to replace OAS influence with their own regional organizations. The Community of Latin American and Caribbean States (CELAC), for instance, was created in 2010 in Venezuela. The regional bloc excluded the United States, and Hugo Chávez became CELAC’s first president. The Bolivarian Alliance and UNASUR also emerged to counter US influence.

Rather than promoting democracy and prosperity throughout the region, these regional bodies have amplified socialism and regional fragmentation. With no binding powers, the OAS has plunged into weak leadership and unassertive actions.

While the United States continues to be an important commercial partner in the region, a recent poll by Latinobarometer has revealed its geopolitical relevance has dwindled.

Notably, China has picked up the mantle with funding for development projects, and Mexico’s diplomatic leadership has bounced back. Mexican President AMLO—who has said Cuba is an “example of resistance” and should be declared “a World Heritage site”—is trying to revive CELAC, which has not met since 2017. He has also announced vaccine donations to countries in Latin America and the Caribbean struggling with the COVID-19 pandemic.

The Game Has Changed

The Cold War is long gone, but the forces that threatened the Americas then have transformed into subversion from within through lawfare and crossborder criminal networks. They work with former guerrillas such as the FARC and protest movements to promote destabilization.

Democracies across the region must understand strategies from decades ago are obsolete. One way to allow democratic voices to bypass their repressive governments is by incorporating citizen participation in the OAS and strengthening civil-society networks struggling for freedom in Cuba and Nicaragua.

If the OAS is to survive as a credible organization, it needs to rethink its governance model. By failing to hold governments accountable, it foments corruption, higher migration, organized crime, and poverty in Latin America.