Maduro’s Key Associate Served as US Informant
Skip to content 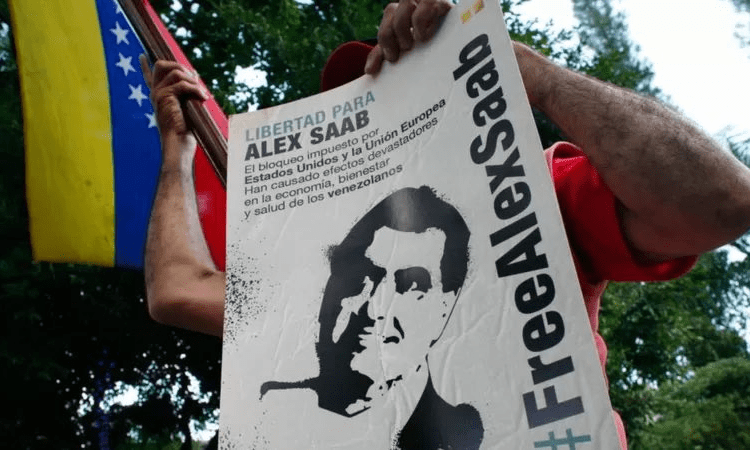 Álex Saab is a 50-year-old businessman with close ties to the Venezuelan government. (@LauraRebelde16)

On February 16, 2022, declassified US court documents revealed that Álex Saab, Venezuelan dictator Nicolás Maduro’s right-hand man, has cooperated with US officials. They have been in contact with Saab since 2016.

The federal judge in the southern district of Florida, Robert Scola Jr., unveiled the records. They revealed a 12-month arrangement between Saab and the US Drug Enforcement Administration (DEA) in which he forfeited almost $10 million.

BREAKING: Prosecutors says Alex Saab was signed up as a cooperating source of @DEAHQ since June 2018 and was scheduled to surrender May 30, 2019.

As an informant, Saab provided information on bribes paid to Venezuelan officials. He also forfeited nearly $10 million to the DEA. pic.twitter.com/Bn9IgTpvz1

Who Is Álex Saab?

Álex Saab is a 50-year-old businessman with close ties to the Venezuelan government and other leftist political leaders in Latin America. They include Piedad Córdoba—a former Colombian senator.

Saab is from Barranquilla, a Colombian city located in the Caribbean region. He is the son of a Lebanese immigrant, Luis Saab, who died due to COVID-19 in April 2021. Luis Saab was also a textile and food businessman across various cities in Colombia.

Between 2004 and 2011, Álex Saab managed a textile business called Shatex SA in Colombia. He allegedly exported his products to Ecuador, Venezuela, Brazil, Australia, India, China, and other Asian countries.

According to a report by El Espectador, Saab’s company Shatex managed to launder $25 billion in seven years through fictitious exports to those countries. However, Shatex is only one of many companies run by Saab.

What Is Saab’s Relationship with the Venezuelan Government?

The contract established that Saab’s Colombian company Global Construction Funds (FOGLOCONS) had to export housing materials from Colombia and Ecuador to Venezuela. The goal was to provide housing to those in need under the framework of the Great Venezuela Housing Mission.

In 2016, Saab then made arrangements to provide food supplies to the Venezuelan government for a food assistance program in Venezuela called Local Supply and Production Committees (CLAP). However, CLAP had crucial failures when delivering food assistance to the citizens.

According to a Voice of America report, Saab exported only a fraction of the food needed for the CLAP program. The cost of each food box varied between $0.30 and $1.00, which is about two-thirds of the minimum wage in Venezuela. Despite the benefit CLAP offers to some people, the report claims the products lack nutrition, and the deliveries are insufficient.

What Do the Declassified Documents Reveal?

The declassified documents reveal that Saab had “proactively collaborated” with the DEA for 12 months. Saab worked as a “confidential source” for the agency. During this collaboration, Saab provided the DEA with information about his crimes, some of which involved the Venezuelan government.

As part of his cooperation agreement with the United States, Saab revealed bribes and influence-peddling cases committed by the Maduro regime. Accused of money laundering, he remains in prison in Miami. The documents say Saab agreed to turn himself in to US authorities in 2019. However, Saab did not comply with that part of the agreement.

A hearing transcript revealed that Saab wanted the documents to remain sealed and his meetings with the DEA a secret. Saab’s lawyer asked the judge to keep documents 25 and 26 sealed for fear that Saab’s family would suffer “very powerful retaliation” from the Maduro administration. According to Saab, Maduro has threatened his entire family.

How Was Saab Arrested?

According to ILOCAD, the firm that used to represent Saab, in June 2020 Saab was traveling from Venezuela to Iran to negotiate fuel and coordinate humanitarian aid to cope with the COVID-19 pandemic. On the way, the private jet needed to refuel in Cape Verde, where Saab got arrested.

Six months after being arrested in Cape Verde, in December 2020, Maduro appointed Saab as Venezuela’s plenipotentiary ambassador to Africa. The defendant’s lawyers claimed that, due to the appointment, Saab had to be granted full diplomatic immunity.

Cape Verdean officials claimed he had no immunity since he was not an ambassador during his arrest. Consequently, Cape Verde’s government extradited Saab to the United States in October 2021. US judicial authorities are still solving that case in US courts.

According to Saab’s lawyers, in earlier visits to Iran he managed to secure medical supplies and food aid for the Venezuelan population. He also arranged Iran’s support for Venezuela during its fuel shortage in April 2020.

What Is Saab Accused Of?

The US government accused Saab of money laundering, bribes, and other charges. Nonetheless, the US Prosecution Office dropped seven out of eight charges due to an extradition agreement between US and Cape Verdean authorities. The arrangement was that Saab should not receive longer sentences than Cape Verdean laws would give him.

The main accusation against Saab regarding a conspiracy to launder money is still ongoing in the US courts. Saab faces a maximum of 20 years in prison.

In October 2021, right after Cape Verdean officials extradited Álex Saab to the United States, the Venezuelan government released an announcement claiming, “The Bolivarian Revolution rejects the US government’s kidnapping of Álex Saab with the compliance of Cape Verdean authorities.” In the announcement, the Bolivarian Revolution also complains about “torture against Saab and illegal detention for 491 days.”

For Jorge Arreaza, former Venezuelan foreign affairs minister, the detention process is full of irregularities. The United States is intervening in local affairs, he contends, thereby violating article 41 of the Vienna Convention on Diplomatic Affairs.

Weeks after Scola Jr. declassified the documents, on February 28 Maduro spoke in front of the United Nations during the 49th period of the Human Rights Council session. Maduro defended Saab, claiming that Cape Verdean authorities bowed to US influence by illegally extraditing Saab.