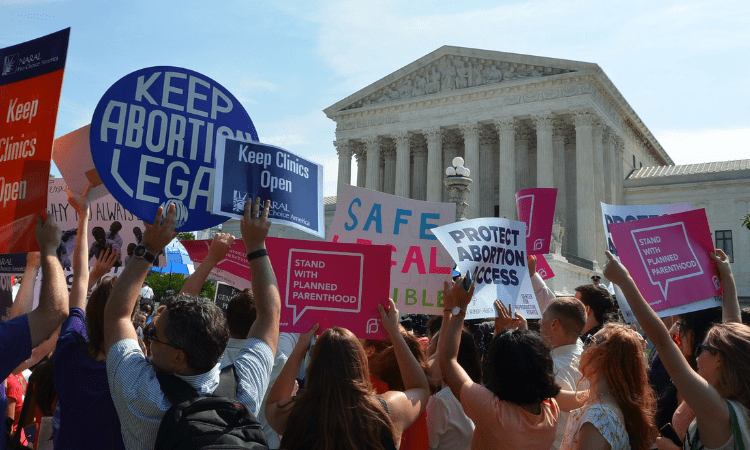 To pay for or promote abortion with taxpayer funds, especially abroad, is a violation of US law. (Adam Fagen)

On June 24, the US Supreme Court overturned Roe v. Wade, cementing Donald Trump status as the most consequential president since Ronald Reagan. The outcome also places a spotlight on how US officials promote so-called reproductive health abroad with foreign aid.

As predicted, leftist violence toward and delegitimizing of the Supreme Court has increased on the basis of this decision. This was an inevitable outcome of the incendiary language used by Democrat leaders, such as (majority leader) Senator Chuck Schumer (D-NY) and Congresswoman Maxine Waters (D-CA), regarding SCOTUS rulings and violent protests in general. Twenty-seven Democrats voted against providing greater protection for SCOTUS justices, even as an attempted assassination of Justice Brett Kavanaugh was foiled.

The SCOTUS decision provoked international reactions, especially among leaders in Europe, where the strictness of abortion regulations is varied. Foreign leaders entered into the fray, knowing that the Joe Biden administration would not protest the violation of diplomatic norms on a matter so important to the international progressive movement. Departing markedly from international decorum, foreign leaders lambasted the decision of the highest court in the United States. Political leaders from the G7 countries were aghast at the SCOTUS decision.

Global opinion surveys show that abortion on demand is not a majority opinion in every place at every time, but that did not stop political leaders from commenting on US domestic affairs. UK Prime Minister Boris Johnson called the SCOTUS decision a “big step backwards.” In France, where abortion is not a fundamental right, President Emmanuel Macron tweeted:

“Abortion is a fundamental right for all women. It must be protected. I wish to express my solidarity with the women whose liberties are being undermined by the Supreme Court of the United States.”

“My heart goes out to the millions of American women who are now set to lose their legal right to an abortion. I can’t imagine the fear and anger you are feeling right now.”

Guatemala’s equivalent of Anthony Fauci, Edwin Asturias—the former executive director of the Presidential Commission for Attention to the COVID-19 Emergency—stated:

“SCOTUS has curtailed the right of millions of women to decide what to do with their bodies … the hypocrisy of the anti-abortion [movement] that allows children to die of malnutrition, to be marginalized without vaccination, and to be impoverished human beings is undeniable. A vile backsliding.”

The same US government taking the condemnations has invited the unprecedented level of foreign intromission in internal US affairs. Various US agencies have expressed themselves in the wake of the Dobbs v. Jackson decision. In doing so, they gave the tell. When the US government speaks of “reproductive health,” it includes abortion.

Secretary of State Antony Blinken publicly linked “reproductive health services” with abortion in a recent tweet published in response to the SCOTUS decision.

“The Department is examining this decision closely and evaluating our policies to ensure we continue to provide seamless access to reproductive health care as permitted by federal law” [emphasis mine].

The public positions adopted by US functionaries are problematic. To pay for or promote abortion with taxpayer funds, especially abroad, is a violation of US law. As a case in point, USAID disburses funds for “reproductive health” in countries such as Guatemala, a country which has been celebrated for its official pro-life stance. Given Blinken’s own public statement, it is not a stretch to believe that by “reproductive health” the State Department means abortion. This is a matter worthy of immediate Congressional investigation.

The next US Congress should investigate the US government’s promotion and financing of abortion, as a matter of law. The Helms Amendment to the Foreign Assistance Act of 1961 prohibits “the use of foreign assistance to pay for the performance of abortion as a method of family planning or to motivate or coerce any person to practice abortion.” The Hyde Amendment “prohibits the expenditure for any abortion of funds authorized or appropriated by federal law.” The Hyde Amendment also “[p]rohibits the use of federal funds for any health benefits coverage that includes abortion.” Further, the Siljander Amendment “[p]rohibits the use of funds to lobby for or against abortion.”

US law is clear: abortion should not figure in US foreign policy. It is also clear that the current federal bureaucracy is not in accordance with the spirit of US law on the matter. This causes confusion and conflict, not just within the United States but also with our key allies in the Americas.

Guatemala is a case in point. Guatemalan society does not share the values of the progressives currently in power in the US government. Especially at a time when the United States says it is preoccupied with the expansion of socialism and Chinese penetration in the region, it would behoove the United States to not unnecessarily alienate a key ally such as Guatemala by pushing a controversial position which is not even a point of internal consensus within the United States.

In an international political system officially composed of sovereign nations, the United States would do well to respect the fact that many countries find US progressivism repugnant. In the end, this degradation of US soft power affects national security. Not everyone buys the junk our government is selling, not even in the United States.