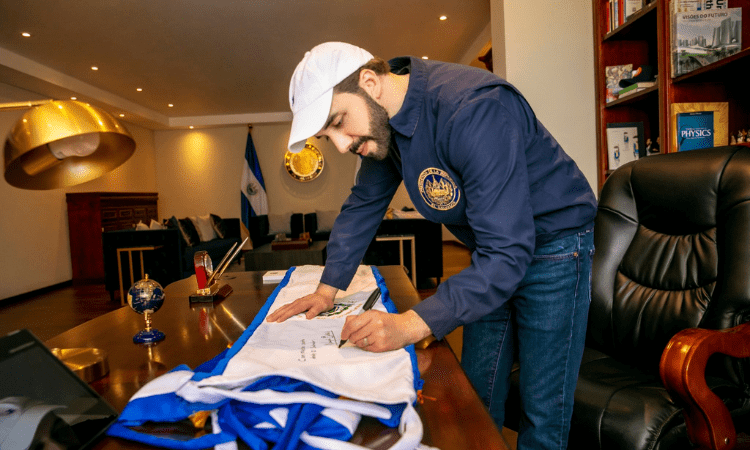 Under the guise of fighting a war on gangs, El Salvador’s self-branded millennial president, Nayib Bukele, is placing limits on free speech for Salvadoran citizens and the media. By controlling the executive and legislative branches, the ruling New Ideas party has reformed legislation to control and effectively dampen its opposition.

Bukele has maintained a sophisticated communications strategy, and through taxpayer funds and lawfare he is shaping public debate—particularly on security. Our investigative team at the Impunity Observer shares its findings in this regard after interviewing Saúl Hernández, director of the Focos media outlet in El Salvador; Roxana Lazo, a former journalist and a professor at Gerardo Barrios University; Wendy Monterrosa, founder of local media outlet Public Voice; and Angélica Cárcamo, president of the Salvadoran Journalists Association (APES).

In five months between 2021 and 2022, the Bukele administration has reformed three laws indirectly affecting freedom of speech.

In December 2021, the Salvadoran Congress—led by the ruling party—reformed the Law on Computer and Related Crimes, approving a provision to punish the release of “confidential” information with prison sentences of five to eight years. The provision can refer to governmental information, particularly information related to security.

According to Digital Rights, a Salvadoran NGO advocating for free speech, this reform undermines civil engagement as it penalizes overseeing the activities of government officials. Francisco Villatoro, the ruling-party congressman who proposed the reform, explained that the provision seeks to avoid online crimes such as fraud, identity theft, and pedophilia.

Hernández, Lazo, and Monterrosa—the interviewed journalists—argue that getting information from government entities has become increasingly difficult since Bukele took office. They explain that officials can arbitrarily designate as confidential any information regarding security issues. Hernández cited the example of pandemic data: “The government has categorized as ‘confidential’ for the next five years information about the medical plan during the COVID-19 outbreak and the vaccine acquisition processes.”

In March 2022, when Bukele declared a state of emergency due to gang violence, Congress passed a series of reforms to the Criminal Code and the Law Banning Criminal Gangs; they now allow police to investigate people who reveal government information using virtual tools for espionage. The document fails to establish accountability processes for these police operations. Also, officers are not required to have a judicial order but only the Public Ministry’s approval.

Ruling party Congressman Walter Coto argued that the legislation had to be updated because “people are using social media to commit crimes.” But according to Hernández, when it comes to national security affairs, the reformed criminal laws “prevent journalists from revealing the full picture of what is going on.”

Furthermore, in April 2022, Congress passed a provision to punish and jail anyone who “names or reproduces messages or propaganda about gangs,” including media outlets. Such measures are justified by ruling party Congressman Caleb Navarro: “the media is packed with audiovisual garbage, and we cannot normalize these practices.” Congresswoman Marcela Pineda says the reform does not threaten freedom of speech. She further explains that the intent of the reform is to punish the members of the press who have “the intention to declare that the gangs are ruling here.”

Serafín Valencia, an APES member, reveals police and government officials have been aggressive against the press when covering crime scenes. Valencia referred to a case that went viral when a police officer slapped a journalist at a cliff edge. The journalist was covering the death of a university student.

In addition, a January 2022 study from Citizen Lab—an organization that belongs to the University of Toronto—revealed the Salvadoran government has spied on at least 31 journalists and four activists since June 2020. The Bukele regime has been using Pegasus malware to hack their electronic devices.

Although other organizations—such as the International Federation of Journalists—ratified this finding, the Prosecutor’s Office first refused to investigate. According to Cárcamo, now the institution is trying to delay the case. Government Spokesman Sofía Medina has denied any participation of the Bukele administration in the Pegasus malware case.

The interviewed journalists point out that the Bukele administration’s pressure exerted on journalists leads to further harassment from Bukele’s sympathizers and trolls. In this regard, Lazo confessed: “I have never felt such intense harassment in my entire life as I did in 2019 as a journalist. During my last coverage, I had to leave Congress protected by police officers after posing some questions to the Congress’s vice president.” Lazo quit her job as a journalist for a local media outlet in late 2021 due to governmental harassment.

Bryan Avelar, a Salvadoran journalist exiled in Mexico, argues that Bukele started attacking the press for reporting that El Salvador’s decrease in violence stemmed from under-the-table pacts between the government and gangs, among other reasons.

However, the pacts’ existence is now common knowledge, although their content is murky. In December 2021, for example, the US Treasury Department imposed sanctions on two Salvadoran officials for reaching secret agreements with MS-13 and 18th Street gangs. Allegedly, the agreements included financial incentives for the gangs.

On August 22, Salvadoran Police arrested Luis Rivas (@_ElComisionado_) for allegedly slandering and referring to the Bukele administration with disdain. Both are crimes under the recently reformed Law on Computer and Related Crimes. The penalty for denigrating authorities goes from six months to three years, but it can be up to four years if the alleged victim is the country’s president.

The crime Rivas purportedly committed was a tweet that questioned why security officers were safeguarding the president’s brother Karim Bukele at the beach. Karim is not a public servant.

In his first hearing, on September 5, judges paroled Rivas on $10,000 bail. Prosecutor General Rodolfo Delgado, designated by Congress in 2021, argued Rivas abused his freedom of speech. Delgado said: “There is a fine line between freedom of expression and committing a crime.”

According to Monterrosa and Lazo, however, this case against Rivas confirms that the Bukele administration is seeking to intimidate those who criticize the government or reveal information about public servants.

Ever since Bukele was a mayor, he has had a solid presence on Twitter with hundreds of thousands of followers. Today, he boasts 4.2 million followers. A University of Seville study revealed that, by June 2019, 3,236 of Bukele’s followers—out of a sample of 5,000—were accounts with no tweets, no followers, and mostly retweets, which is common among false accounts. 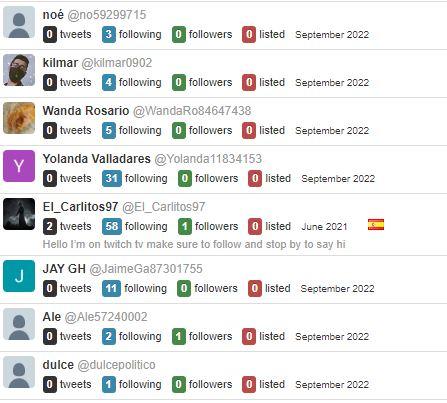 The study also found that most of Bukele’s tweets are not focused on public announcements but on promoting his administration’s agenda and version of events. The rest were retweets and humor. According to Cárcamo, Bukele’s tweets portray him as a “rockstar or a showman.” He has claimed to be “the world’s coolest president” and “the world’s coolest dictator.” He has also fired government officials via Twitter, and communicated the results of his security policy using the hashtag #GuerraContraPandillas (#WarOnGangs). With 129 tweets mentioning this hashtag, it has become the most used by Bukele since 2019. 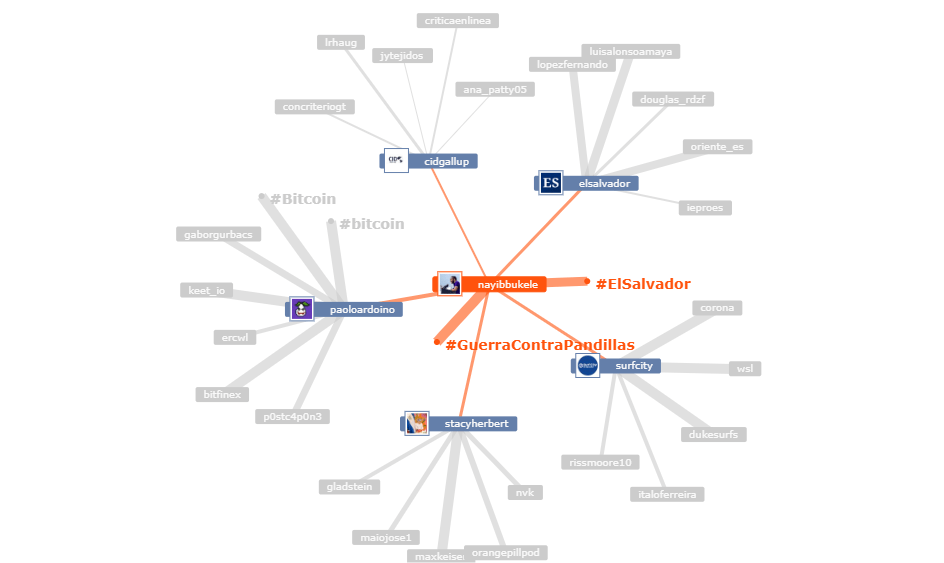 Although Bukele is globally known for his social-media presence, he turns to traditional media to reach the Salvadoran population, of which 50 percent do not have access to the Internet. Hernández told the Impunity Observer that Bukele “communicates everything he does via TV and radio advertising spots.” The president broadcasts completed public works, social programs, and direct transfers to citizens.

Bukele has previous experience in political communication. Before devoting himself to politics, for over a decade Bukele was the director of Obermet, his family’s advertising agency. Incidentally, the leftist party Farabundo Martí Front for National Liberation—which backed Bukele’s candidacy to become San Salvador’s mayor in 2015—was allegedly Obermet’s major client.

Since Bukele took office as president, the government budget allocated to communications has increased exponentially. In 2022, the presidency’s communications budget more than doubled that of the previous year, reaching $2,930,170.

The Costs of “Security”

A Cid Gallup poll conducted after Bukele announced his reelection revealed that he enjoys 90 percent of approval. He has decided to run for the presidency again, although the Salvadoran Constitution forbids reelection.

For Ryan Berg—director of the Americas Program at the Center for Strategic and International Studies—“Bukele is a highly personalistic leader who exhibits autocratic tendencies.” Berg explained to the Impunity Observer that Bukele has made unilateral decisions that could benefit favored gangs. These include the massive incarceration of alleged gang members without due process and turning bitcoin into legal tender after a three-hour debate in Congress.

In a similar vein, spokesmen of gang MS-13 revealed that the gang made a pact with Bukele. They made it public after murdering 87 people in March 2022, as a response to the government’s betrayal of their pact. An MS-13 leader said: “The government made arrests that they were not supposed to make. They [law enforcement agents] told us to meet in a place to talk, but instead of talking they made the arrests.” In the meantime, the Bukele administration continues its narrative regarding the war against gangs. Bukele contends “gangs will have to pay for the crimes they have committed.”

In this regard, Berg said: “The problem with these deals—and this is across all administrations—is that they empower gangs and essentially make them political actors. By enshrining their control over homicide rates and security policy, gangs have immense leverage over public policy.”