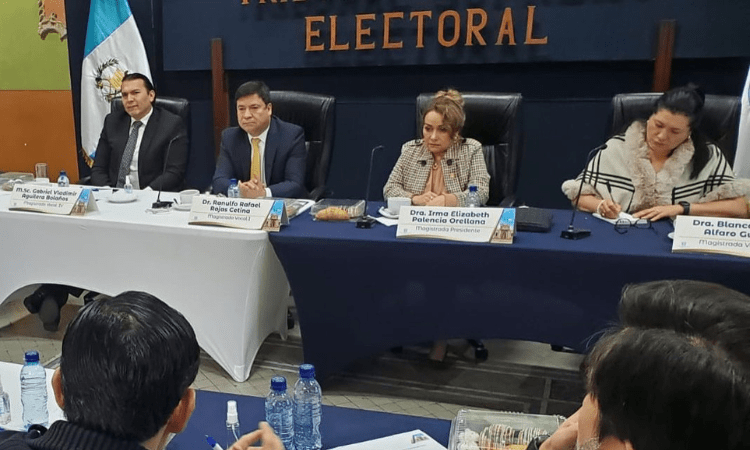 In Guatemala, where voting is voluntary, elections are going through a credibility crisis. (@TSEGuatemala)

On June 25, 2023, Guatemalan voters will elect the country’s president and vice president, 160 congressmen, and 340 mayors for the 2024–2028 term. As the electoral process is set to start on January 20 and candidates remain undeclared, there are no polls yet. However, the most likely scenario is a presidential runoff on August 27.

In Guatemala, where voting is voluntary, elections are going through a credibility crisis. According to the Americas Barometer LAPOP by Vanderbilt University, only one-third of Guatemalans trust elections. Moreover, the Supreme Electoral Court (TSE) has recently been involved in nontransparent procurement processes, compounding the problem of an ambiguous regulatory environment generated by the 2016 congressional reforms to the Electoral and Political Parties Law.

For instance, on October 28, Citizen Registration (RC), the TSE branch that handles voter data, banned center-right candidates Roberto Arzú (Podemos) and Neto Bran (People’s Party) from participating in the upcoming presidential election. They were allegedly campaigning before the permitted period, which is banned by the Electoral Law. The TSE then reversed the ban, arguing that the RC had no authority to issue sanctions against political actors.

To find out which legal loopholes are fueling confusion and arbitrary rulings in Guatemala’s electoral system, the Impunity Observer interviewed:

The Electoral Law and TSE resolutions set the ground for elections. The Electoral Law has been under steady criticism since its reform in 2016. The TSE has also drawn ire for attempting to modify voting procedures by implementing electronic mechanisms without scrutiny. In addition, the TSE has issued sanctions against political parties and candidates that could ban them from the 2023 election. This is the case for Arzú and Bran, who were punished due to alleged promotion of themselves on social media.

For the 2023 election, the TSE has authorized the participation of 28 political parties. Of them, 10 are new. These include Cabal, the Republican Union, and the Republican Party. President Alejandro Giammattei’s Vamos party and the leftist Union for Hope (UNE) are among the largest parties. Other parties, such as Winaq, Vision with Values, National Development, and Podemos, date back to 2018 or earlier.

How the Electoral Law Divides

In 2016, Congress passed substantial reforms to the Electoral Law. These addressed overseas voting, advertising airtime, and campaign financing. In contrast to achieving the purported goal of setting clear rules, the reform has created legal loopholes and arbitrariness.

Regarding overseas voting, Ben Monterroso, a representative of the independent nonprofit devoted to Guatemalans voting abroad (Voguare), argued there was a letdown in the 2019 election. For Monterroso, the TSE lacked the will “to ensure Guatemalan expatriates could vote.” For Guatemalans, this has remained a concern for the upcoming election.

On November 25, TSE magistrates used extraordinary legal authority to revise the Electoral Law, including word clarifications and grammar editing. In addition, the TSE made slight modifications with the stated goal of ensuring the legislation’s constitutionality, streamlining the ballot chain of custody, and establishing due process for the punishment of electoral misbehavior.

Despite these revisions, the experts interviewed by the Impunity Observer contend the Electoral Law continues to endanger democracy. The following restrictions for political campaigns affect emerging parties that could challenge incumbents:

Campaigns can only start 90 days before the election. According to Quezada, this is too short, particularly for small and emerging parties. Traditional parties and widely known candidates have an advantage, since their image is already well positioned in the political arena.

The only funds political parties can receive are from the electoral fund. According to the Electoral Law, they receive 15.7 quetzales ($2) for every vote they got in the previous election. One need not be a mathematician to see this heavily favors incumbents at the expense of newcomers.

This ban has resulted in more undeclared, off-the-books financing, either from licit or illicit sources. One of the most recent and prominent cases involved Sandra Torres, a former first lady (2008–2011), the UNE leader, and a likely presidential candidate. The Public Ministry accused Torres of letting her party receive seven donations from unknown sources in 2015, totalling $600,000. The party allegedly did not report the donations to the TSE as required. However, there appears to have been insufficient evidence for conviction. Torres was found not guilty by High-Risk Court A, led by judge Claudette Domínguez, in November 2022.

The Electoral Law considers any advertisement or promotion activities that can be related to the upcoming election, when not yet TSE authorized, as an “anticipated campaign.” As Quinteros notes, this definition is vague. Officials can unlawfully weaponize this rule to persecute and punish candidates. In a similar vein, Quezada contends “the TSE has the power to use arbitrary sanctions under this justification to intimidate candidates.”

For the 2023 election, the Guatemalan Department for Procurement and Purchases allowed the TSE, under resolution 121-2022, to directly purchase goods and services totalling 900,000 quetzales ($114,000) or less in 2022. The chairman of the TSE magistrates is responsible for approving those. Purchases exceeding that amount of money must be subject to a vote of all TSE magistrates. The purported goal is “to conduct efficient purchasing processes, without disregarding transparency and quality.”

For Irene Flores, a consultant at the National Economic Research Center, this resolution evades the Guatemalan Procurement Processes Law (GPPL), which the TSE must abide by.

The GPPL only allows direct purchases when the total cost is less than 10,000 quetzales ($1,200), and the office of Comptroller General of the Republic must supervise all procurement procedures. Other members of civil-society organizations have argued that the resolution, which goes around the GPPL, gives free rein to TSE magistrates.

In 2022, the TSE has had around 60 public procurement processes, of which 47 were direct purchases under the aforementioned resolution. These included the “purchase of information and security systems for implementing a technological model in the 2023 election” with technology company Smartmatic—although TSE officials later reversed their purchase.

Smartmatic was the only company that presented an offer, at a cost of 606 million quetzales ($77 million). Founded in 2000, Smartmatic—a technological equipment and software provider for cybersecurity and electronic government—has participated in over 140 elections across the world. It has deployed over two million devices for balloting, voter identification, and so on.

The company, however, has been involved in multiple controversies regarding transparency. For example, the Philippines’ Justice Department prosecuted Smartmatic executives due to allegedly altering the voting machines’ encoding. Other irregularities in elections using Smartmatic’s devices or software have been recently reported in Venezuela, El Salvador, Argentina, and Italy.

After pressure from civil society, the TSE itself, through resolution 83-2022, halted the process and submitted the purchase order and conditions for review by TSE analysts. The deal has fallen through, at least for the upcoming election.

The procurement procedures dashboard at the TSE website shows every direct and procurement-based purchase of technological devices as “rejected.” According to the institution, the sole purpose was to facilitate voter access. “We are only interested in biometric machines that can help identify voters,” TSE magistrate Gabriel Aguilera said.

Despite his statement, until November the institution had open direct purchases for data centers, servers, and other technological equipment apart from biometric machines. The implementation of technology that might result in a different balloting mechanism contradicts the Electoral Law. The legislation creates temporary committees for vote counting—called polling boards—and these committees dissolve right after they accomplish their tasks.

The law states “polling boards must receive, administer, count, and report the numbers to the TSE in every election.” The implementation of such technology will likely be subject to congressional debate on whether it is applicable under Guatemalan law.

Regarding biometric-identification machines to facilitate voter access, our interviewees argued these are not ideal in the country. Since many citizens work in agriculture and handicraft jobs, their fingerprints are damaged and are not readable. In 2018, 46 percent of the Guatemalan population lived in rural areas, and most worked in agriculture.

Biometric machines could also endanger vote custody and data privacy. Rather than incorporating additional systems and machines, González and Quinteros argue the TSE can use traditional, established voter data for electoral registration and analytics.

TSE magistrate Irma Palencia contends the institution will not “pursue the purchase of biometric machines for the 2023 election.” However, the TSE can still try to implement such technology for future elections.

In addition to citizens’ lack of confidence in the potential deployment of new technological systems, nontransparent procurement processes, an electoral authority lacking goodwill, and the highly criticized Electoral Law have put a cloud over the 2023 election. While candidates and political parties fear arbitrary law enforcement, the Electoral Law raises the incentives to evade regulations and not declare additional campaign financing.