Fabricating Genocide to Bring Down Ríos Montt
Skip to content 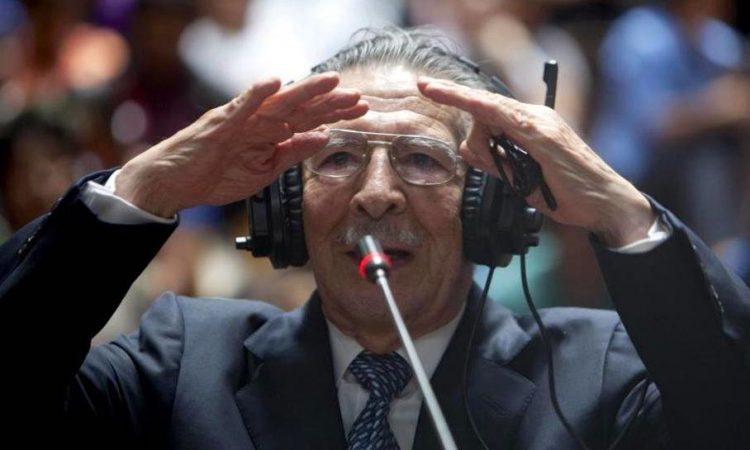 The elderly defendant, having been found guilty and sentenced for genocide, stood alone among the spectators. Adrift in a vast public space that was more like an auditorium than a courtroom, the old man wavered about with no one to lean on.

The presiding judge, Iris Yassmin Barrios, had dismissed the old man’s legal team but ordered him to stay in the chamber and receive the reactions of a large, hostile crowd.

The judge herself, from her podium at the front, had welcomed the crowd’s cheers for the verdict, and had answered back with a salute that seemed to come straight out of the European mass movements of the 1930s.

Then came the tell-tale sentence: “The trial marked the first time a head of state has been tried for genocide by his country’s own judicial system.”

That line was a good clue as to how the world was treating the genocide trial.

On April 18, 2013, a US activist for the conviction — Kelsey Alford-Jones, director of a Washington, DC-based nonprofit called the Guatemala Human Rights Commission — had told a reporter for Pacifica Radio KPFA: “As you know, this is the first time — in the world, in fact — that a former head of state is being charged with the crime of genocide in national courts.”

In a report two weeks later, the New Yorker made a statement identical to the activist’s: “The trial is unprecedented. It’s the first time a former head of state has gone on trial for genocide in a national, as opposed to an international, court.”

Shortly after the 2013 verdict, Guatemala’s highest court overturned the trial on procedural grounds — an action that was to raise a conflict between Guatemala and the United States. In December of the following year, just before the new trial was to begin, US Secretary of State John Kerry congratulated Judge Barrios and included this line:

“No former head of state had ever been brought before a tribunal in his own country on charges of genocide.”

That phrase with many echoes was a deliberate construction, following its intended pathway. It originated in the activist world; it gained employment among journalists; it reached its end purpose in a speech by the US secretary of state.

Like many pronouncements of this type, it also concealed an opposite truth. The main impetus for the genocide trial had not arisen in Guatemala; it had come from abroad. It started when Rigoberta Menchú, the world-famous Guatemalan activist and Nobel laureate, brought a complaint to Spanish prosecutors, who then spent more than a decade developing the case. (Menchú has always had more pull abroad than at home.)

In Guatemala, though, the chief engineer of the genocide prosecution was Claudia Paz y Paz, whose background had perfectly prepared her for the job. She had begun her career investigating war crimes and atrocities, as part of the team that produced the controversial “Recuperation of Historical Memory” or REMHI report.

Before becoming attorney general, Paz y Paz had also been a legal adviser for human rights to the Guatemalan archbishop; a consultant to the United Nation’s Guatemala mission; an investigator at the Commission for the Historical Clarification of Guatemala (which used the REMHI report); and a legal director on refugee matters for the UN high commissioner.

Among other things, this résumé shows an unusual closeness to the United Nations, which is now a highly partisan player in Guatemalan politics. More fundamentally, though, it shows no distance in Paz y Paz herself from the problem of the war; not much experience in other areas of life; no effort to walk in other people’s shoes; not much “give” in human relations; no time or inclination to be a “civilian.”

Finally, and to a striking degree, Paz y Paz’s résumé points to the agenda described by her own sympathetic observers.

Her interest in the war cases was beyond professional. Close family members had been guerrilla partisans. And then, the dilemma which another insurgent had described through the offices of legal scholar Karen Engle: “We lost the war. All we have now is justice. Prosecutions are the new site of political struggle.”

Paz y Paz’s office would be an arrow shot at the heart of the republic — an arrow called genocide.

Outside a courtroom or a jury room, it makes little sense to talk about who is guilty of what. But we do know something for certain about the charge of genocide in Guatemala. Until 1999 — when Menchú brought her complaint to Spain, three years after the end of hostilities — no one had mentioned the crime in connection with Guatemala’s internal conflict.

When Ríos Montt was running the country, he agreed to have the United Nations issue a human-rights report — which it then did annually, covering each year from 1982 until the signing of the peace accords in 1996.

The United Nations was also a party to the 1996 accords. Had genocide occurred at any time in the conflict, UN officials would have been complicit in the crime if they had not described and denounced it. At the time, they never did.

But in May 2013, as soon as the genocide conviction was announced, the UN high commissioner for human rights hoisted the flag.

“Guatemala has made history by becoming the first country in the world to convict a former head of State for genocide in its own national court,” Commissioner Navi Pillay declared, in what had become the mandatory phrase.

How this endorsement failed to square with the United Nation’s earlier silence was not a subject for give-and-take.

While it’s proverbially impossible to prove a negative, the fact that the crime was never mentioned in its time suggests a very strong case against genocide. Why, then, try to fabricate such a crime?

The law of national reconciliation ending Guatemala’s armed conflict had promised no punishment for offenses right up to arson, kidnapping, and murder. But the law did provide an exception for “crimes against humanity” — of which genocide was one.

So, with a certain prosecutorial agenda, if genocide had not occurred it would need to be invented.

Some parties to the prosecution apparently thought that, with the right emphasis, horrific crimes like rape and mass slaughter could be pushed to look like genocide. At the start of the courtroom process in 2013, the DC nonprofit National Security Archive argued for the genocide conviction this way:

“Ríos Montt stands accused of masterminding a violent counterinsurgency campaign during his 1982-83 regime that sought to destroy opposing guerrilla forces and anyone who supported them. The indictment accuses [him] of responsibility for fifteen documented massacres in the Ixil region of the country’s Quiché department, resulting in the deaths of 1,771 unarmed men, women and children.”

This argument proves the very point it is trying to defeat. A “violent counterinsurgency campaign” or even a massacre is just that — counterinsurgency or massacre, not genocide. Hitler and his henchmen, gold-standard-bearers in the field of genocide, did not murder the Jews of Europe as a military strategy. They killed Jews to get rid of Jews, period — and that’s genocide.

Ríos Montt did not do genocide to the Ixils, and the Ixils knew it. When the “dictator” had become an ex-dictator and was running for office, Ixils voted for him in large numbers — prompting one columnist to ask in print:

“Why for the love of God did the Ixils vote in three consecutive elections for General Genocide?”

Paz y Paz might be a straight arrow for genocide, and her supporters might be dull enough to fly along. But there was one party to the discussion that wanted, and still wants, a genocide conviction — even knowing how incorrect it would be; even knowing that the criteria do not work; even knowing that further fraud might be necessary to get it.

That party was, and is, the government of the United States under President Barack Obama.