Is Guatemala’s Attorney General a Woman of Courage, or Compliance?
Skip to content 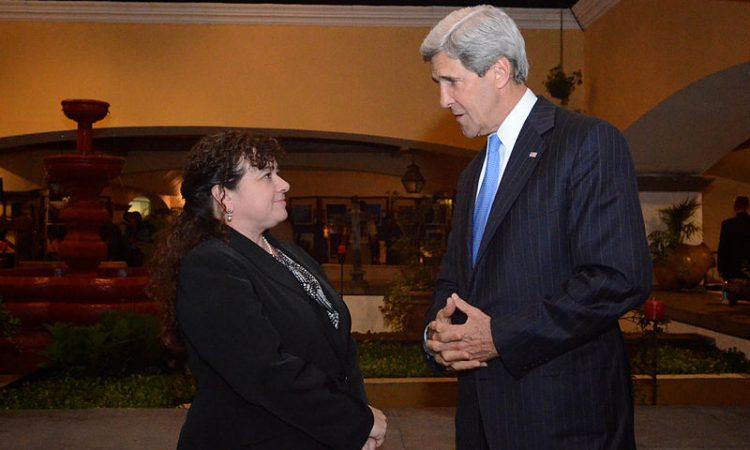 Paz y Paz, pictured left, did the dirty work of the US State Department. (Wikimedia)

On March 29, US Secretary of State John Kerry, in a State Department ceremony, conferred one of its International Women of Courage awards on Guatemala’s attorney general, Thelma Aldana.

According to the official citation, Aldana was being honored for having “fearlessly prosecuted criminals and politicians that had previously been considered untouchable, including bringing corruption charges against the President who appointed her and his Vice-President.”

Aldana is the second Guatemalan woman in three years to win the State Department award. In 2014 Judge Yassmin Barrios was cited for her role in presiding over the genocide trial of the country’s former leader, General Efraín Ríos Montt.

The prosecutions of an ex-president in one case, and of a sitting president in the other, have been instruments of US foreign policy, as the State Department’s own citations about the “women of courage” indicate.

In Aldana’s cases against President Otto Pérez and Vice President Roxana Baldetti, the State Department’s praise of her “fearless” prosecution effectively asserts the defendants’ guilt in advance of their trial.

The citation of Barrios is even more explicit in calling Ríos Montt guilty.

But Kerry, in a State Department conference a few months afterward, carried it still further.

“The stakes were enormous. … And the magnitude and the consequences of Judge Barrios’ decision are almost impossible for me to convey to you adequately. She exposed the truth. She gave voice to thousands of Ixil-Mayan victims, and she provided a crucial legal precedent for genocide cases worldwide.” [emphasis added]

Kerry’s praise gave no indication that the trial had been halted by the action of a higher court, and had still not concluded.

Ten months before Barrios received the State Department’s award, Guatemala’s highest judicial authority, the constitutional court, had thrown out a guilty verdict and suspended the trial on grounds that Barrios violated the defendant’s constitutional rights.

Barrios had expelled Ríos Montt’s lawyer from the court and then ordered his co-defendant’s lawyers to defend him. With a multitude of actions and gestures, Barrios had recreated the atmosphere of the Nazi and Soviet show-trials in her courtroom.

That overwhelming stench was palpable to fair-minded observers visiting the trial. One of those was certainly not the US ambassador, Arnold Chacon, who attended a crucial session of the trial with the single-minded idea of supporting it — as he had already exhorted the Guatemalan people, in a Spanish-only statement, to do.

Kerry’s statement, while acknowledging none of that, tells a world of truth about the Obama administration’s policy. Since 2010, Obama’s three US ambassadors in Guatemala have been pushing for a judicial branch in which politics, not law, is the governing principle.

The Ríos Montt prosecution, flawed as it was, managed to set the table for the ones that brought down the sitting president and vice president — both now imprisoned on charges that have yet to be proved.

In conversation with two journalists representing The Daily Caller, Pérez called the later prosecutions “a coup without bullets.” Behind those maneuvers, Pérez contends, was the furtive power of the U.S. government.

Of late, U.S. power has become more overt and even exuberant. With the embassy’s support, Aldana’s justice ministry is arraigning former army officers in ‘mini-genocide’ cases.

In the so-called Sepur Zarco case, where two former officers were tried for assassination and sexual enslavement, Aldana’s prosecutors used forensic work performed by a private foundation instead of by the official forensic body — a violation of law.

At odd moments when the defense tried to introduce evidence in its favor from that foundation, the presiding judge — Yassmin Barrios, reprising her role from the genocide trial — refused to admit it.

Barrios, however, did accept testimony from women who said they had been raped at the camp, had returned home, and had then gone back to the camp to be raped again. That sequence, involving 11 women, supposedly went on for six months — and not a single pregnancy resulted.

The foregoing facts were not admitted by the court. Nor were the officers allowed to confront the witnesses against them; the accusers, although present in court, were not required to testify.

The officers got sentences of 120 and 180 years — the convictions being for crimes against humanity, forced disappearance, and other charges conveniently exempt from the 1996 amnesty that ended the country’s 40 years of internal conflict.

Galindo told The Daily Caller that, as a defense attorney, he feels threatened by the ambassador’s actions.

Columnist Ileana Alamilla put it this way: “Nowadays the orders are coming in English.” Alamilla’s phrase refers to the US embassy’s recent campaign for the congress to re-appoint Gloria Porras a justice of the constitutional court.

President Pérez told The Daily Caller that several congressional deputies had visited him at his confinement quarters to complain of pressure which Ambassador Robinson was applying on behalf of Porras.

Some deputies, according to Pérez, said they got a rough message from U.S. embassy operators: “If you don’t vote for Gloria Porras, you can stop coming around to the embassy for coffee” — while other deputies reported that “they even heard mention of the visas.” That would be the all-important matter of being allowed to travel to the United States.

Thanks to the embassy lobbying — and in the face of evidence that she had misappropriated court funds — Porras won her re-appointment in congress by a vote of 145 to 6. That’s a very steep majority for a congressional appointment.

Seeing things in that light gives another view of Attorney General Aldana and her award for being a “woman of courage.”

Let’s paint Aldana in her actual colors. Above all, she is an astute observer of politics who has climbed the ladder in a treacherous environment.

Aldana also knows that Gloria Porras has gotten to the highest court in the land because she is a reliable executor of those same causes.

The attorney general was lauded by the State Department because she agreed to prosecute the CICIG’s cases against Pérez and his vice president. But that’s no necessary sign of courage. In this environment, it was more likely an act of compliance with the real sources of authority.

Unless we should ever happen to get a fair presentation of the Pérez and Baldetti cases in court, we can’t know the attorney general’s motives. But the closer one looks at Aldana’s State Department award, the more suspect it becomes.