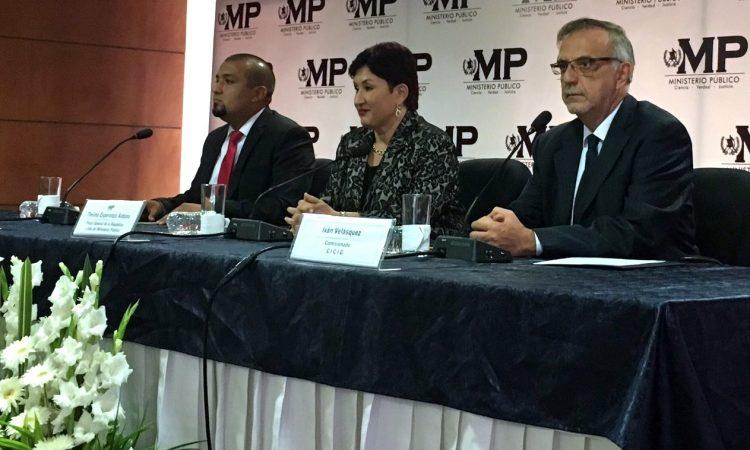 CICIG Commissioner Iván Velásquez (right) sits alongside Attorney General Thelma Aldana at the signing of an agreement between the two organizations. (@CICIGgt)

This is to inform you that this commission received a complaint filed by Mrs. Karen Edda Ness Barnhill, who complains against FRENA1 and URNG2 for acts outside the law, protecting persons implicated in illegal processes and punishments to force communities to act against the law. She denounces the disappearance of Casimiro Pérez from the village of Nuevo San Francisco of the Municipality of San Pablo, Province of San Marco, on January 22, 2015. She said that Mr. Pérez had complained to the authorities and testified against these groups, among them Member of Congress Carlos Mejia of the URNG.

Due to the CICIG having a policy of selection and prioritization of cases arising from the need to optimize its available resources during the term of its mandate, said complaint is remitted so that the Justice Ministry as an institution that executes criminal prosecution in Guatemala takes whatever action it deems pertinent.

With nothing further, I offer you cordial regards.

Attorney General of the Republic and Head of the Public Ministry

2. Guatemalan National Revolutionary Unity, the umbrella group for the armed attempt to topple the government during the 1960-1996 armed conflict. They became a political party after the peace accords.