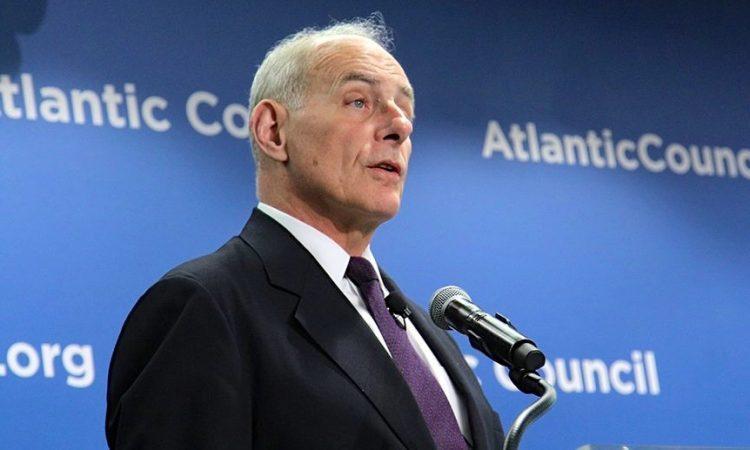 US Homeland Security Secretary John Kelly at the release of the Atlantic Council's report on Central America. (@AtlanticCouncil)

A new report is dominating discussion of Central America policy, but it glosses over one pivotal problem. The authors’ deference to the status quo puts them at odds with the Trump administration’s search for solutions to problems bleeding across our southern border.

The self-described nonpartisan Arsht Center of the Atlantic Council — funded in part by US taxpayers and foreign governments — issued the report on May 4: “A Blueprint for Central America’s Northern Triangle (Guatemala, Honduras and El Salvador).”

Secretary of Homeland Security John Kelly delivered the keynote for the report’s release. He noted the US border “begins 1,500 miles south.” That’s the 595-mile, very porous border between Mexico and Guatemala.

The report identifies a myriad of symptoms — horrors really — and proposes specific actions for the United States, mostly through the Alliance for Prosperity aid program:

Illicit activity combined with the push of migrants north, makes the region a national security priority.… Economic development, rule of law, and security in those countries will make the United States safer as well.

The authors, however, leave a gaping hole. They fail to mention lawless groups whose impunity stems from US policy. Today, successors of Castro-supported guerrillas dominate Guatemala’s rural areas and force inhabitants into their criminal agenda — from blocking police access to destroying factories and infrastructure.

For the Atlantic Council’s proposals to have their stated effect, undoing the Obama Administration’s embrace of Castro-supported guerrillas in Guatemala is critical.

Just as President Barack Obama pivoted towards Cuba, his State Department prevailed upon Guatemalan leaders. His agents got allies of guerrillas from Guatemala’s internal conflict (1960-96) appointed to government positions, which politicized a judiciary that now protects the leftists.

Political opposition to this policy has been muted by threats of prosecution and US visa cancellations. The US embassy has followed through, and retribution lurks via notorious violations of due process and law.

A key ally is the Orwellian, UN-backed Commission Against Impunity in Guatemala (Cicig), which the report wrongly praises. The UN secretary general appoints the Cicig Commissioner (Iván Velásquez), who names his staff. The United Nations does not audit the Cicig, nor does anyone else; its personnel are not subject to any law anywhere. The Cicig embodies impunity.

To fortify their allies’ control over Guatemala, as Obama’s holdovers leave the State Department, the Cicig commissioner and US Ambassador Todd Robinson are illegally pressuring the Guatemalan Congress to change the Constitution. The “reforms” violate the Alliance for Prosperity, because they degrade the judiciary and give it supremacy over the other branches.

The United States cannot help the Northern Triangle countries establish the rule of law if US officials act criminally and support criminal parties, a fact omitted by the Atlantic Council report. Further, without reliable oversight of the Cicig, we risk wasting hundreds of millions of taxpayer dollars and putting national security at risk.

While Secretary Kelly has correctly stated that economic development and safety in the Northern Triangle are necessary, the anti-Trump bias of the report is hard to escape. The Atlantic Council webpage announcing the report blares, “Trump described Mexican migrants as rapists.” Immediately following, it quotes Secretary Kelly as saying migrants are “good people as a group,” implying a split with the president.

The report’s task force co-chair John Negroponte endorsed Hillary Clinton for president. He is unlikely to look into her secretary of state role as executor of the Obama policy, which continues under Ambassador Robinson.

Hillary Clinton personally involved herself in Guatemalan affairs, including a phone call to Guatemala’s then president. Even after her tenure, she pressured him to reappoint a guerilla ally as attorney general.

Another co-chair, Eduardo Stein, former foreign minister and vice president of Guatemala, is the vice president of ASIES. This NGO backs the constitutional changes to consolidate power in the judiciary — the same judiciary that is shutting down businesses and supporting violations of due process against Robinson’s and Velásquez’s opponents.

The Guatemalan government’s abandonment of rural areas to Obama’s allies nourishes drug and sex trafficking, extortion, potential terrorist crossings and illegal immigration. Technical help will not address these problems. Only law enforcement will, to the benefit of the oppressed rural population.

The immediate removal of Robinson and the encouragement of proper application of the law to Guatemala’s countryside would free the people and businesses to pursue their legitimate desires. The results would be increased security and control over the flow of illegal persons and contraband through what Secretary Kelly has recognized as our real southern border.