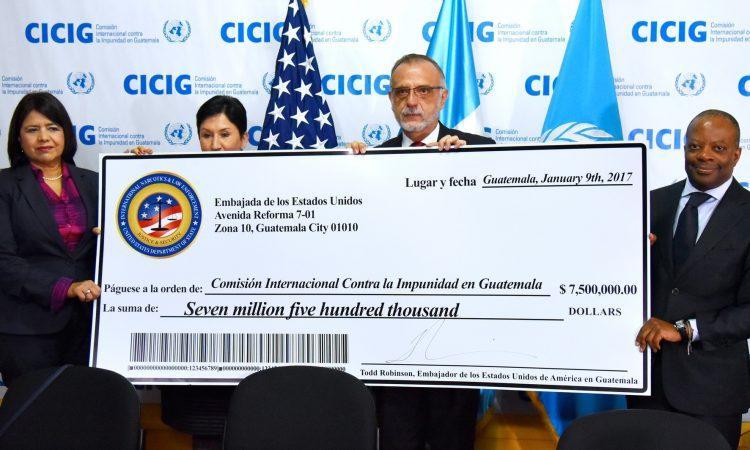 CICIG Commissioner Iván Velásquez holds the ceremonial check from the US embassy in Guatemala, with Ambassador Todd Robinson on the right. (US Embassy)

An unaudited UN commission, with the support of President Obama’s holdover ambassador, is promoting lawlessness in Guatemala, especially in its rural areas.

The issue is now before the US Congress.

House of Representatives Resolution 145 of May 17, sponsored by Norma Torres (D-CA), states the International Commission Against Impunity in Guatemala (CICIG) is “making important contributions” to combating corruption. It urges the government there to cooperate.

That is both far from the truth and ill-advised.

The UN secretary general appoints the CICIG commissioner, who names his staff. The United Nations does not audit the CICIG, nor does anyone else. Its personnel are not subject to any law anywhere.

Meanwhile, US taxpayers bankroll the CICIG and its faux fight in Central America. US foreign aid via the Alliance for Prosperity – $750 million for the region — also depends on CICIG continuation, as made clear by former Vice President Joe Biden during three visits to Guatemala.

A letter to Secretary Tillerson from six senators alerted him of Obama State Department meddling abroad against “moderates and conservatives” in favor of “extreme and sometimes violent political activists.” This describes precisely Obama’s policy in Guatemala.

Obama’s officials, including then Secretary of State Hillary Clinton, embraced the remnants of Fidel Castro-supported guerillas in Guatemala. The CICIG and Obama holdovers continue to provide these leftists with protection from the law.

One justification for H.R. 145 is support for the CICIG against “attempts to publicly discredit their work,” as though it is beyond scrutiny. This coincides with the words of Commissioner Iván Velásquez: “Do not be fooled by false defenders of the rule of law who seek to maintain the status quo to preserve their privileges.”

Such a shallow, dismissive response to reasoned criticism speaks for itself.

The CICIG’s stated purpose is to protect “the right to life and to personal integrity” of citizens from vigilante groups that “commit illegal acts” — those linked to “agents of the State or [with] the capacity to generate impunity for their illegal actions.”

The CICIG has flipped this mission on its head. Without fear of prosecution, guerrilla-descended groups violate private property and sabotage infrastructure development in rural areas. Prosperity and stability would weaken their grip on the populace.

Illegal armed groups forced residents of San Pablo, San Marcos, to block police access and oppose a hydroelectric project. To achieve this, they threatened to deny residents’ children access to schools, cut off electricity and water, or worse. The government does nothing to stop the coercion.

Casimiro Pérez, a Mam Indian, faced being burned to death if he did not perform hard labor, because his wife participated in a public event sponsored by the hydroelectric plant. Pérez filed a criminal complaint, and he was kidnapped on January 22, 2015, and taken by a mob to the hydroelectric plant, where they destroyed facilities.

Karen Ness, a human-rights activist, advocate for trial by jury, and US Navy veteran feared Pérez might be dead, so she filed a complaint with the CICIG, “knowing that this case fell within its mandate.” Seven weeks later, Commissioner Velásquez sent her a copy of a letter he sent to Attorney General Thelma Aldana, saying the case was not among CICIG priorities.

“Neither the CICIG nor the attorney general have stopped the operation of these illegal groups,” she says.

One of the illegal groups mentioned in Velásquez’s letter is URNG (Guatemalan National Revolutionary Unity), which became a political party after the 1996 peace accords. At the insistence of Fidel Castro, it became an umbrella group in 1982 to coordinate the four guerrilla organizations attempting to violently overthrow the government.

Velásquez’s clever referral of the case to the Justice Ministry was an effective dismissal, because the attorney general knows she must pursue CICIG cases and can ignore others.

Ambassador Robinson and Velásquez have also been illegally promoting changes to the Guatemalan Constitution. These would enhance their allies’ ability to resist changes prompted by the Trump administration to increase security and liberate the rural indigenous population.

Prior to his position with the CICIG, Velásquez had already earned a reputation for leftist alliances. Criticism came from none other than former Colombian President Álvaro Uribe, a staunch opponent of the narco-guerrilla FARC, who accused his countryman of using false witnesses, “driven by his sneaky leftism.”

All CICIG apologists can muster in defense is that detractors must support corruption and impunity. References to government support in Guatemala are a sham, since local officials understand Alliance for Prosperity aid to be contingent on CICIG acceptance.

Before deciding on H.R. 145, the Senate can insist on reliable oversight. If they confirm that the CICIG violates its mandate, they would disprove the resolution’s assertion that thanks to the CICIG no one is above the law in Guatemala. Rather, a new layer of corruption has replaced the old, with unfortunate consequences for US interests.