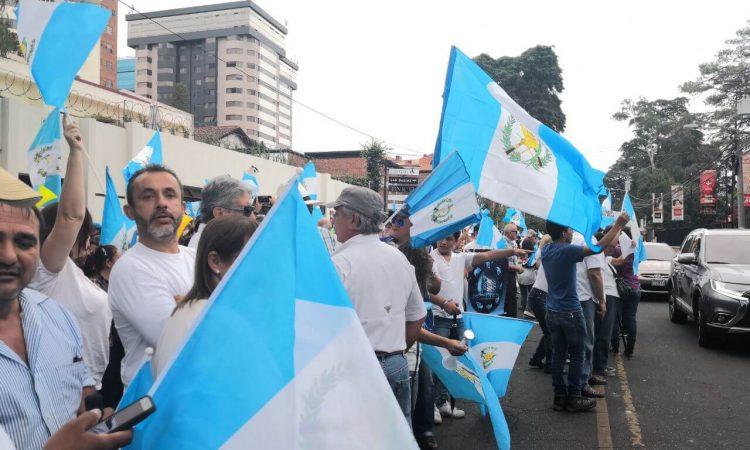 Opponents of a UN commission in Guatemala, which has locked horns with the current president, are becoming outspoken in their discontent. The rising tension manifested in a protest last Saturday morning outside the headquarters of the CICIG, the International Commission against Impunity in Guatemala.

The 400 people present at the CICIG in Zone 14 of Guatemala City represented a coalition of residents and advocacy groups. Ricardo Méndez Ruiz—a local businessman and president of the Foundation against Terrorism—initiated the event with the support of Guatemala Immortal, a social-media following whose stated objective is freedom for citizens. The Liga Propatria also had a presence, as participants condemned the CICIG as ideologically biased and working against its mission of the rule of law.

They contend that the CICIG itself is a demonstration of impunity, lacking any clear accountability. They want its commissioner, Iván Velásquez, to heed the persona non grata order from President Jimmy Morales and leave the country immediately.

“Get out of Guatemala, Iván Velásquez! No to interference, abuse of power, and biased, unfair, and ideologically selective justice.”
— Guatemala Immortal

One protester, who asked to remain anonymous for fear of retribution, said the CICIG “has corrupted the justice system and removed the presumption of innocence.” The attendee believes CICIG power in the country hinges on the perception among many that even innocent parties can have their lives disrupted by arbitrary detentions.

Boris Lemus, another protester, said that “Guatemala is a democratic country, and perhaps we have poverty in our country and many things to fix, but we prefer private property, the rule of law, and sovereignty before socialism.”

Guatemalans sing their national anthem, in a rejection of international meddling.

The CICIG first came to Guatemala in 2007, with the approval of the Guatemalan Congress and the United Nations and notable funding from the US federal government. Since then the commission has become a polarizing presence, garnering strong support from local and international progressives and socialists, but also from some business leaders such as Dionisio Gutiérrez.

Vanderbilt University published 2017 survey data from voting-age Guatemalans that showed majority support for the CICIG. However, that came prior to the persona non grata declaration. Further, two major research reports have come out in the past month, critical of the CICIG’s activities—one from a local coalition of civil-society organizations and one from Judicial Watch (PDF), a rule-of-law NGO based in the United States.

The local report, an 11-part series, has drawn attention to problems with many legal activities of the CICIG, along with the unprecedented block from the Constitutional Court on the persona non grata order. The Judicial Watch report noted deep progressive sympathies within the CICIG, along with explicit support from George Soros’s Open Society Foundations.

There were no visible signs of disapproval or opposition to the protest. However, there were many local journalists observing. Further, more than two dozen police ensured no opportunity for violence.