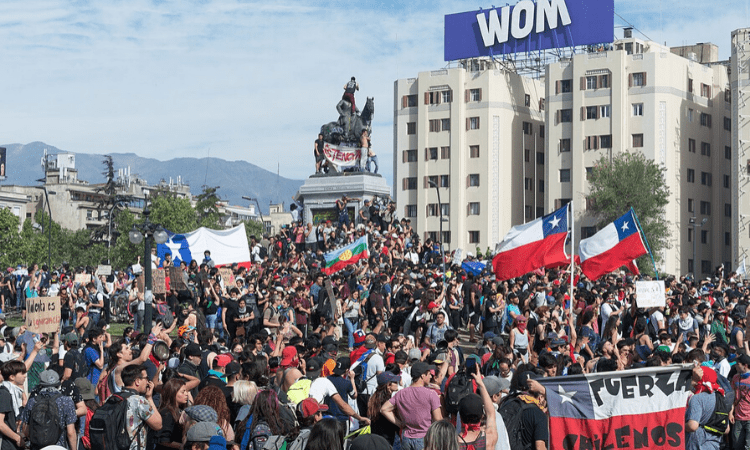 The Chilean left has exploited social unrest to set their takeover into motion. (Carlos Figueroa)

In Chile, what started as a strike against a rise in subway fares has turned into an all-or-nothing push for a new constitution. This transition to radical social demands should not surprise anyone familiar with Latin-American leftist tactics. It has happened before in Venezuela, Ecuador, and Bolivia, and unless Chileans wake up, it will undo the region’s freest economy.

The Chilean left—collaborating with Cuban and Venezuelan agents—has exploited social unrest to set their takeover into motion. They encouraged people to attend peaceful demonstrations and then betrayed that promise by inciting violence and vandalism. Despite evidence to the contrary, they have convinced the Chilean public the country’s market-based economy is at the root of all social woes.

As in other Latin-American countries under socialist assault, changing the constitution has long been a dream of Chilean leftists. Days before leaving office in 2018, then-socialist-president Michelle Bachelet forced the issue onto her successor, the conservative Sebastián Piñera, by sending Congress a proposal for a new constitution.

Faced with week after week of destruction to the tune of $1.4 billion and the loss of 70,000 jobs, the government caved. The Piñera administration reached an agreement with opposition parties to hold a plebiscite in April 2020 on whether to rewrite the constitution.

The Opinion Battle Lost for Now

Strike leaders have claimed the current constitution is a dictatorship-era imposition holding back social progress. The truth is that democratically elected lawmakers have modified it 43 times and altered 256 provisions since it was enacted in 1980. Unfortunately, the left can get away with misleading assertions because most Chileans do not know constitutional history.

Unawareness is taking its toll. According to the latest surveys and a citizen consultation, 85 percent of respondents said they would vote for a new constitution. Why? A more generous pension system and better government-run health care and education are their biggest concerns.

The stated motives are puzzling, since the current constitution already includes the right to education, health care, and social security. The Chilean government has a duty to provide those services.

If the Chilean people are dissatisfied with these services, legislation is the appropriate instrument to overhaul their provision and assign more funds if need be. The same applies to other demands such as higher wages. The current constitution provides the framework to settle all these issues through the legal and court systems.

This is not enough for the leftist agenda. Chilean radical activists would like to see an expansion of basic rights and an all-encompassing nanny state. A new constitution would be their opportunity to tilt the political system in favor of a socialist conception of government. They want centralization of power to be applied arbitrarily—by them.

We Have Seen This Movie Before

Chile’s road to serfdom is paved with the experience of neighboring countries. Enacting a new constitution is how the socialist regimes in Venezuela, Ecuador, and Bolivia have latched onto power for decades.

In April, Chileans will go to the polls to choose whether they want a new constitution or not and, very importantly, who will draft it. The alternatives are a constituent assembly, in which all members are elected for this purpose, or a mixed convention, in which members of Congress and elected citizens share half of the seats. The Latin-American socialists have always preferred constituent assemblies packed with their sympathizers to weaken institutional checks and balances.

A mixed convention offers the best of both worlds. It brings together democratically elected citizens from two different contexts: before and after the social disruption. This method also underscores the authority of Congress as the legislative power. The more diversity among constituents, the more debate and legitimate consensus. Leftist stakeholders would have less room to impose their agenda.

Another way Chilean leftist parties are trying to secure power is by pushing for the inclusion of 16- and 17-year-olds in the electoral register. They have noticed how socialist regimes in Brazil, Nicaragua, Argentina, and Ecuador attained majorities in elections thanks to this generational broadening of the franchise. They have every reason to expect Chilean teenagers to vote their way: the recent protests began with progressive high-school students.

The Piñera administration, the ruling coalition, and Chilean liberal intellectuals need to jump into the breach. Given the overwhelming majority for a new constitution, they should focus on campaigning to secure a mixed convention and a document that preserves Chile’s cornerstones: free markets, the rule of law, and property rights.

Violent protests in 2019 from socialist radicals have caused Chile to lose billions in damages, production, trade, and investment. More than 140,000 Chileans have lost their jobs. The entire country needs to realize more of the same will come with a social contract that tramples on the foundations that have made Chile a story of success.