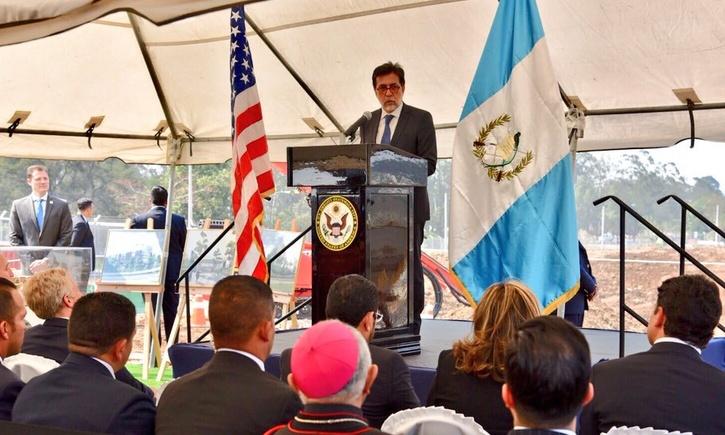 Luis Arreaga leads an assault on the rule of law, according to Liga Pro-Patria. (US Embassy Guatemala)

On June 28, the Liga Pro-Patria, a Guatemalan legal watchdog, issued the following statement:

Events that at first glance seem unrelated show a coordinated attack on the rule of law in Guatemala. US Ambassador to Guatemala Luis Arreaga leads this assault privately and publicly.

During three and a half months of a “state of calamity,” which suspends constitutional guarantees, the Guatemalan government has announced its intent to modify the Constitution. Some of the so-called reforms are the same ones former Ambassador Todd Robinson tried to impose along with Colombian Iván Velásquez, the FARC ally and former commissioner of the now defunct UN Commission Against Impunity in Guatemala (CICIG). Arreaga is pushing these constitutional changes while the government distracts the population with the Covid-19 crisis and tries to reverse the previous defeat of those reforms by the Guatemalan people.

The proposals would permit functionaries of the judicial branch to choose their own successors. Four successive US ambassadors have worked to impose socialist judges on us, so together they can decide what is legal and what is not, regardless of the Constitution. Their judicial dictatorship protects their allies and persecutes whomever does not agree with them.

Arreaga has intervened in police appointments so socialists can control criminal investigations. With the control they have of the Constitutional Court (CC) and the Prosecutor General’s Office—especially through the special branch against impunity (FECI)—the socialist cabal wants to add control of the Supreme Court (SC) and the police. This would be tantamount to having the CICIG once again operating in our country.

Congress should not obey illegal CC orders to appoint to the SC magistrates aligned with the judicial-dictatorship agenda.

Symptomatic of the above, a congressman presented a criminal complaint on June 5 against FECI chief Juan Francisco Sandoval. The lone witness to the charges, a congressional aide, was assassinated three weeks later. We cannot trust police leaders to properly investigate the crime because some of them went on the US State Department payroll after having been fired from the Interior Ministry. They rejoined the government just a few months ago. These officials were part of the group imposed by Robinson on former President Jimmy Morales, who fired them in 2018.

The socialist objective is to obtain control of the executive branch. With the de facto CICIG within our own government, they would control the electoral authority, in which they already have some aligned magistrates.

We Guatemalans must open our eyes, recognize the intent to impose tyranny on us, and energetically reject it. We must unite to protect our liberty through demanding compliance with the law.

We must demand the president declare Arreaga persona non grata despite him having only a short time remaining here. US President Donald Trump supports liberty for all countries. He will understand. The interests of his country are convergent with our most important interest: establishing the rule of law.