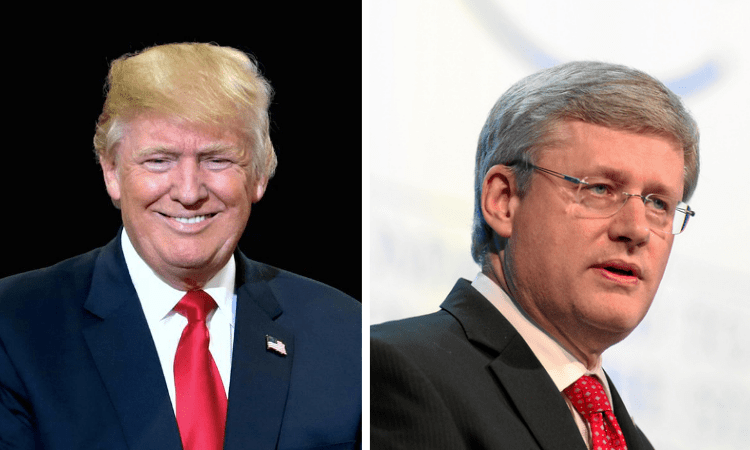 Donald Trump’s electoral success did not just humiliate his Republican primary challengers, it humiliated the Conservative Inc. chattering classes of Washington, DC, and New York. When they came out universally against him—epitomized by the “Against Trump” National Review edition—they showed themselves to be impotent.

As the vitriol from Conservative Inc. went nowhere, it revealed a disconnectedness from the grassroots of the Tea Party and Republican Party: the silent majority did not pay attention to the self-appointed thought leaders. A new generation of conservative thinkers are similarly unintimidated, with the American Mind and American Conservative rising to challenge established publications.

The beltway insiders fail to grasp the merits and depth of the groundswell. Former Canadian Prime Minister Stephen Harper has a bitter pill for those who continue to resist the populism that is here to stay.

Harper’s Right Here, Right Now: Politics and Leadership in the Age of Disruption (240 pages, 2018) has thoughtfulness, clarity, and profundity uncommon in books by politicians. One gets the sense he, gasp, wrote it himself. He also reads the audio version, for those who prefer to listen (seven hours).

Why This Man Merits Listening To 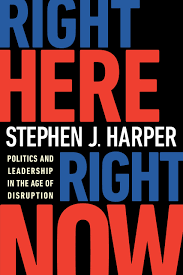 Harper is distinctively qualified to address the fracture within conservatism between what he describes as the somewheres (nationalists) and anywheres (globalists). On the one hand, he has for decades been in political power. He also has an elitist disposition and is the current chairman of the International Democrat Union, a “global alliance of the centre right.”

On the other hand, Harper’s intellectual roots are with the circle of conservative thinkers at the University of Calgary, where he completed his bachelors and masters degrees in economics. Tom Flanagan of the Political Science Department was a notable mentor, author of Harper’s Team: Behind the Scenes in the Conservative Rise to Power.

Harper has walked the talk. His success getting reelected for the top job in progressive Canada, including during the Great Recession in 2008, cements his clout on effective conservative leadership. While not an ideological puritan, Harper has a favorable view of the United States—more than a recent US president we shall not name—so his electability belied the fervent anti-Americanism in the Great White North.

What Insiders Fail to See

The Western world is coming apart, as Charles Murray famously wrote with specific reference to the United States. While technological innovation has enabled higher standards of living, there is a widening canyon of values and outcomes. Many people are missing the boat. Symptoms abound: rising extramarital births, the opioid epidemic, even a lost generation turning to radical movements such as Occupy Wall Street and the misnomered Antifa.

A rising tide of people feel left out, alienated, and frustrated, and Harper says conservative politicos and thinkers ignore them at their peril. Many populist grievances are legitimate, and the task for those engaging in political life is to understand and resolve them. Dismissing uncouth, working-class sentiments with name-calling only worsens the problem.

Lane Scott captured the sentiment well in a classic essay for the American Mind. She pushes back against the “endless, scolding op-eds” that fell “mostly upon deaf ears.”

In other words, they still enjoyed their cushy positions and were not the ones suffering in fly-over America.

Harper believes the same sentiments are rising elsewhere in the West, including in his home province but most notably in the United Kingdom. Brexit was a middle finger to the ruling class, reciprocated with a painfully obstructed and watered-down outcome.

The UK and US situations, along with Harper’s own years in office, form the lion’s share of the book. His warning is that a rejection of the Trumps and Nigel Farages of the world will not beget another milquetoast Jeb Bush or David Cameron. Rather, it will usher in the likes of Bernie Sanders and Jeremy Corbyn. At least the Trumps and Farages have respect for the nation-state and do not want to put the West on a path to Venezuela. The same cannot be said for Sanders and Corbyn, who are “intellectually adolescent” and “Marxists at heart.”

Even if Harper and I part ways on some economic perspectives, Right Here, Right Now merits status as a primer in modern, “applied” conservative thinking. He eloquently and concisely outlines it as “seeing the world as it is” and “never about ideological purity.”

It is an “intellectual framework” with humility to traditions, institutions, and experiences. Conservatives also understand that the customer has distinct national tastes, in contrast to globalist dogma.

This is where Harper takes a few swipes at libertarianism as utopian, much of it warranted. His contention, however, is that free-market ideology has ruled the Republican and Conservative parties for the past few decades. You could have fooled me. The most libertarian Republican politician of the past 50 years, Ron Paul, remains a stark outlier in his party.

Regardless, a nuanced interpretation is that deregulation—where it has happened—and trade deals have favored those at the top of the economic totem pole, protected by professional and regulatory barriers. Those at the bottom have faced the brunt of competition with Third World labor, and the working class are not happy about it. Park MacDougald notes in the Jewish Tablet Magazine that Trump won white voters without a college degree by a 25-point margin.

Conservatives, if they are to remain relevant, have to come clean on (1) maintaining the rule of law on immigration, (2) opening trade with sensitivity to losers in the process, and (3) fostering a more inclusive economy. In Harper’s mind the latter means accepting the welfare state and even protectionist eyesores such as supply management. Regarding immigration and trade, Harper raises the specter of Chinese infiltration in Canada and warns free-market fundamentalism cannot fight a voracious communist regime.

Harper is asking conservatives to recognize the importance and role of the nation-state as an institution—an antidote to globalist preeminence. The nation-state forms an identity for most people, and patriotism should not be a dirty word, especially within Western civilization. During unstable periods of innovation and change, people will cling even more tightly to their nations, and Right Here, Right Now offers serious ideas for how to navigate these tumultuous waters.