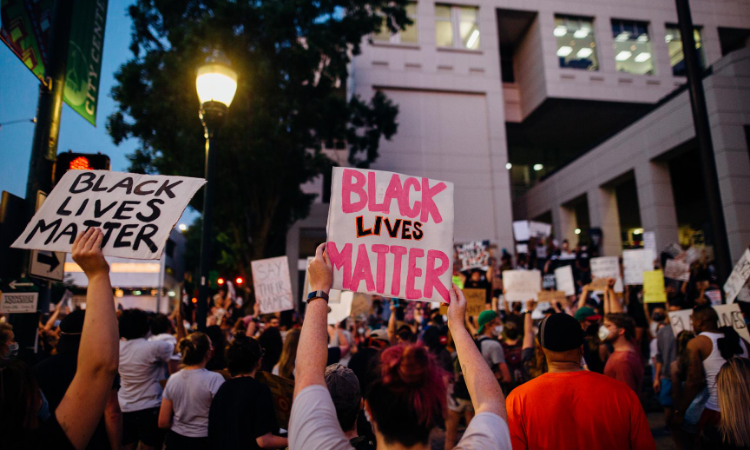 Violence supposedly prompted by a reaction to racism is leading to the opposite reaction its instigators seek. It is working against Democrats and their partners.

Confirmation comes from the statements last week by Joe Biden and Kamala Harris. They condemned violence after having said nothing about it during their convention.

Two-thirds of Americans support Black Lives Matter (BLM). Professional athletes and Democrat leaders kneel in support. BLM’s website prominently displays “We call for a national defunding of police.” Gallup found in a June-July poll that 86 percent of US adults want the same or greater police presence in their communities. For black Americans, the percentage is 81.

Americans want both racial justice and security. They support the concept of “black lives matter” without understanding that BLM the organization is Marxist and wants to dismantle our constitutional republic.

“We are trained Marxists,” said BLM founder Patrisse Cullors in a 2015 video. Cullors referred to herself and cofounder Alicia Garza, whose inspiration Joanne Chesimard fled to Cuba after escaping a life sentence for killing a police officer. After Fidel Castro died, BLM proclaimed “There is an overwhelming sense of loss … we must … come to the defense of  El Comandante … as we aspire to build a world rooted in a vision of freedom and the peace that only comes with justice.”

In his signature 1971 work, Rules for Radicals, Saul Alinsky wrote: “All issues must be polarized … One acts decisively only in the conviction that all the angels are on one side and all the devils on the other … We exploited [racism] for our own purposes.”

Consistent with a typical totalitarian assault, the socialist movement uses race to divide the country. Organizers demonize the enemies: Trump, federal officers, and the police. BLM and Antifa are the operational arm of the socialist movement. They infiltrate peaceful protests to turn them violent. The violence prepares the country for the strong leader —the totalitarian—who will restore order.

Using alleged racial injustice as a divisive tool, not an issue to be solved, movement organizers blocked Democrat negotiations with Senator Tim Scott (R-SC) regarding his bill to reform policing. Scott offered Democrats all the amendments they wanted and said nothing was off the table. Democrats and their partners responded by calling his effort tokenism, a racial insult to Scott. Real reform with the enemy would negate demonization and destroy the revolution.

R.H. Lossin, who holds a Columbia University doctorate, has written “In Defense of Destroying Property” for the Nation. She explains “the object of these protests is the defunding of racist, murderous police departments … Property destruction may be integral to the success of the current uprising … because it is coercive … large portions of our national wealth [was] created through violent expropriation … and forced labor.”

The cries of “no justice, no peace” and “white silence is violence” are intimidation. Everyone must participate or be attacked as racists. Democrats and their media partners, until last week, gave tacit approval.

CNN broke their common strategy with Biden of calling riots peaceful protests after noting focus groups and polls turning against Biden and for Trump. After almost 90 days of silence, Biden and Harris condemned the violence last week. Harris had said the protests would and should continue.

The socialist movement’s new strategy is to blame Trump for the violence. Press Secretary Kayleigh McEnany commented “that’s like the arsonist blaming the firefighter.” Federal authorities have quelled the violence, including in Kenosha, whenever state authorities have requested it.

Democrats and their partners want us to believe Biden will end the violence if elected, but the opposite is true. Lossin contends protestors are communicating with bricks and words: “When we take it back or burn it down, we’re getting back what’s ours.” Biden is a front for socialist radicals, whereas Trump is their enemy number one.

Race hustler Al Sharpton and his comrades knew they had to make their rally in Washington, DC, on August 28 violence free. Even so, BLM activist Frank Nitty yelled, “This is the revolution!” The dead giveaway of its violent, anti-American nature is their continued refusal to engage with Republicans to improve policing.

Democrats promise social justice and free health care and education. That can never result from their revolutionary tools of division and violence. They would only lead to remaking America in the image of Cuba, Venezuela, Nicaragua, and other such dead-end societies.

Americans will see the Marxist program for the manipulation it is, and decisively reject it.