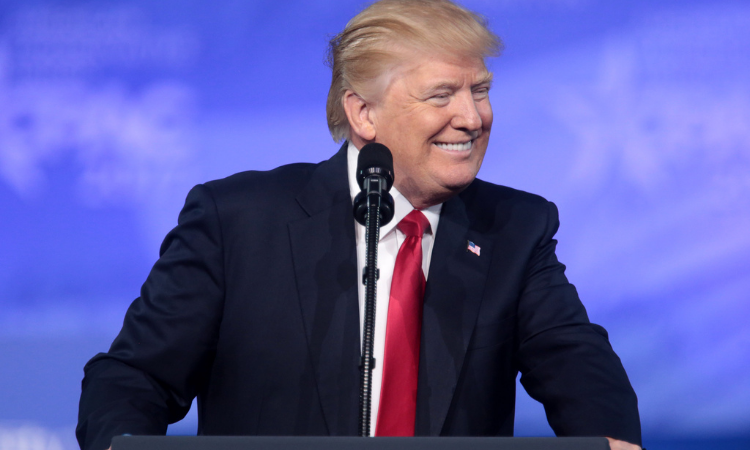 The suspect narrative of “Russian collusion” has been a deplorable, unprecedented trick. (Gage Skidmore)

Donald Trump delights me because, decades before seeking the presidency, he was reacting sharply against national self-haters who were selling US properties to foreigners after gaining political protection for themselves.

Donald Trump delights me because US leftists courted him for years to run for office as a Democrat, and he refused. Somehow, he knew that the people courting him were the very nation-haters he despised; that they were in fact the Democrat Party elite.

Donald Trump delights me because when the Democrat Party let it be known to him that they controlled the mass media and promised to give him a halo if he ran for office, he knew enough to oppose them when he did run. Against the cornerstones of the Democrat mindset—old-fashioned hypocrisy and ancestral Protestant guilt—he opposed a style that was sincere, direct, and brutally honest at times. In return, they branded him as mendacious, arrogant, a bully, and more.

Donald Trump delights me because I know, as only a Cuban can know, how the New York Times, CNN, Washington Post, El País, and many other leftist media have been lying for decades about the so-called Cuban Revolution. With their lies, they have defended the odious Castro state which Cubans have now suffered for more than 60 years.

Donald Trump delights me because he knows that, before media that do not have the decency to admit their allegiance to a decrepit ideology, the only honorable response is to stick out his tongue at their postmodernist BS, to wag a finger at their exaggerations, and to wave his bare ass at their profligate lies.

Donald Trump delights me because, if he had played the gentleman in his debate with poor old Joe Biden, the Democrat mass media would have said that his opponent had silenced him. By interrupting Biden to stop the outpouring of lies and insults, he gave the media an excuse to say what they would have said in any case: that he turned the debate into a circus. Nothing is more refreshing than to act free, knowing that the sentence has already been passed.

Donald Trump delights me because the present-day stand-ins of the old European aristocracy, the so-called socialists and social democrats, have spent decades leeching off the US military budget while denouncing the same fabulous military machine that rescued their nations from Nazism and communism.

Donald Trump delights me because it was past time to leave the “funnel trick” out of America’s relations with its allies. Not only was the US stuck with the narrow end of the funnel; it also had to play the role of the bad guy. Nowadays, the allies who play small with Trump are just not getting their phone calls returned.

Donald Trump delights me because he knows how to react when Germany becomes the 23rd province of China; when southern Europe grows more and more Iranian; or when Australia continues accepting Chinese penetration, even against America’s advice. In this panorama, it’s only wise for Trump to let those nations handle their own defense—or so the American president seems to be saying: nations might not get what they deserve, but they do get what they create.

Donald Trump delights me because I had grown really tired of seeing Russia, with a GDP equal to that of New York State—before Cuomo lowered it—bestriding the world with the air of a superpower, while American politicians who despised their own country were happy to play small.

Donald Trump delights me because, during his first term, Russia tried nothing like eating a piece of Ukraine, or giving orders in Syria, or arranging for its American province, Cuba, to receive unconditional concessions from the United States while the Cuban-American community was prevented from showing its distress.

Donald Trump delights me because, as I have said from the start, the suspect narrative of “Russian collusion” has been a deplorable, unprecedented trick that the FBI, the CIA, and the Justice Department together employed to undermine a legitimate and duly elected president. Documents now being declassified unmistakably reveal a charade unique in US history. Indeed, it is the kind of bottom-feeding stuff that I was sure only Fidel Castro would have had the nerve to pull.

César Reynel Aguilera is a historian and novelist of Cuban origins living in Montreal. He blogs at https://reynelaguilera.wordpress.com. The foregoing piece is taken from a longer essay, now featured on César’s blog, which he wrote in answer to another essay entitled “Donald Trump disgusts me because . . .” by Cuban-American writer Carlos Alberto Montaner.