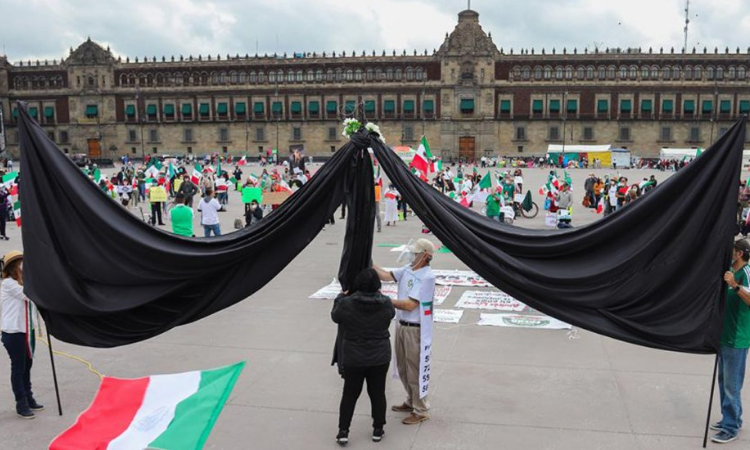 Protesters complain about his weak response to the COVID-19 crisis, violence, and economic recession. (Grupo Miled)

Almost two years after he assumed office, protesters set up camp in Mexico City to complain about his weak response to the COVID-19 crisis, violence, and economic recession.

The biggest protest against his administration took place at the Zócalo square on October 3, after months of growing dissatisfaction with his presidency. The movement started in early 2020 with caravans of cars from more than 200 Mexican cities.

Mexico is undergoing its worst financial crisis in a century. The negative impact of the pandemic has accelerated the economic downturn that was already underway.

The country’s GDP has been continuously decreasing since the second quarter of 2019. The Central Bank of Mexico (Banxico) foresees the economy will drop by 7.3 percent in 2020.

The unemployment rate grew to 5.5 percent in June, and the Social Security Institute reported the country lost 113,677 formal jobs in the first semester of 2020. In August, annual inflation went one percentage point above Banxico’s 3 percent target.

Furthermore, gross fixed investment—the usual expenditure on capital such as machinery—dropped by nearly 40 percent in April and May each. Its decline started in late 2017.

Even though AMLO recently announced the Mexican economy would experience a quick recovery, the Banxico’s governing board disagree. They are concerned the government used all its stabilization funds to weather the COVID-19 storm while increasing public debt to 54.7 percent of GDP and doing nothing to improve the business climate.

AMLO’s 2021 economic package has put the Mexican economy at risk. Even if the plan contemplates austerity, it allocates a significant portion of public spending to white elephants, a recurring theme with populist leaders in Latin America.

It has pulled back to 21 pesos (as of October 19), but the peso has devalued versus the dollar by 7 percent since AMLO took office.

According to Minister of Finance Arturo Herrera, the exchange-rate effect will increase public debt by 10–17 percent this year. This is because 80 percent of Mexico’s public debt is denominated in foreign currencies.

As a candidate, AMLO promised to increase Mexican crude production to 2.6 million barrels per day (mbpd) by 2024. However, Mexico aligned with OPEC to cut production, as the pandemic provoked a sharp decrease in global oil demand.

In the second quarter of 2020, state oil company Pemex produced 1.67 mbpd on average. This output stagnation has represented a forgone 30 billion pesos (around $1.4 billion) to Pemex.

With a debt of $106 billion and $64 billion in pension liabilities, Pemex will continue to lose debt options if it does not expand operations. Moody’s downgraded Pemex to Ba2 in April, and Mexico is set to lose its investment-grade credit rating in 2021.

To compound matters, AMLO recently announced Mexico would cease crude-oil exports by 2024 and process all crude at home. Although he argues reduced production will contribute to environmental protection and wealth for future generations, it appears to be a tactic to disguise the real problem: the Mexican oil industry is falling into disarray.

Given a lack of investment and innovation, Pemex produces low-quality crude with a high sulfur concentration. Moreover, Pemex’s oil refineries are operating at 40 percent of their capacity, mainly because of their poor maintenance. Indeed, crude production has been steadily declining since early 2018.

The same happened with the most oil-rich country in Latin America—Venezuela—as left-wing populists Hugo Chávez and Nicolás Maduro got their hands on oil firm PDVSA. Now the Chavista regime depends on oil supplies from Iran.

On June 7, Mexican Security recorded 117 homicides, the most violent day during the AMLO tenure. According to the University of San Diego, the pandemic has exacerbated violence.

Almost seven out of 10 Mexicans perceive they live in an insecure city, according to the Urban Public Security Survey released on October 19. Of the respondents, 21.8 percent said they or a relative were victims of robbery or crime in the first 2020 semester.

Violence has continued to rise under AMLO’s regime, calling into question his straightforward policy of placing security forces on the streets. This has failed to reduce violence and has served as a cover for breaches of constitutional rights. In 2019, the Mexican Commission of Human Rights received 32 complaints of alleged abuses by the newly created National Guard.

The COVID-19 pandemic has pulled back the curtain on AMLO’s political project. Discontent with his regime has risen; the economy, investment, and the currency have weakened; and insecurity is reaching historic highs.

His governing style resembles those of other populist despots of the region, and Mexicans are waking up to the consequences.