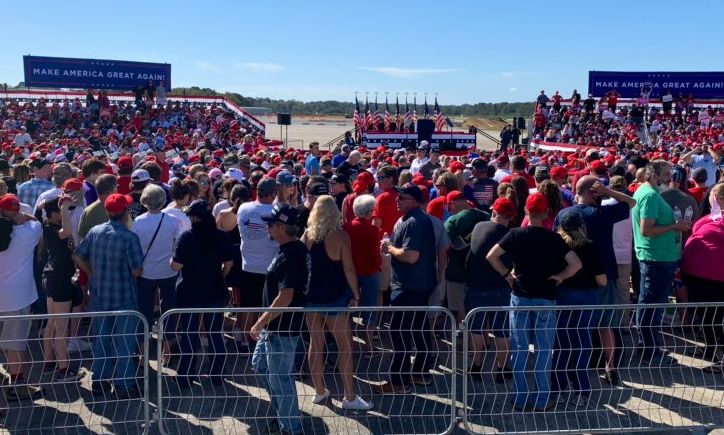 Democrats, their media partners, and corporate elites are working to portray the view of an inevitable Joe Biden victory. Do not believe it.

Enthusiasm from Trump supporters is higher than ever, while enthusiasm for Biden is low. Trump’s rallies, in which participants mostly stand because they are held outdoors near runways, are packed with adoring supporters. Biden’s few rallies attract few people.

The high enthusiasm for Trump has helped him create what is known as an extensive ground game. This is an army of volunteers to make calls and visits among other activities to help Trump win. Volunteers have been successful in the most important activity: registering new voters.

The recent discovery of emails from Hunter Biden has created a problem for his candidate father. Corrupt media do not report the story. Twitter and Facebook have censored it, with the latter even using Chinese nationals to carry out the job. The Biden cabal claims the story is Russian disinformation, and he even repeated this unsubstantiated claim at the debate last night.

Tony Bobulinski, Hunter Biden’s former business partner in a China venture, has confirmed the validity of a key email published last week. It referenced 10 percent for “the big guy,” who Bobulinski confirmed was Joe Biden.

Trump successfully pierced the media effort to suppress the Biden corruption scandal in the debate. Much of the audience of many millions heard for the first time about payoffs to Biden through his son. The media could not block it.

Trump’s army of volunteers circumvent corrupt media and tech censorship. Upset at being blocked by Facebook, these volunteers will call their friends and family. They will complain about the disgraceful actions of the big tech and media companies to help Biden by suppressing and censoring transmission of this important information.

More important than Biden’s corruption is his vulnerability to blackmail by China and the big tech companies that have actively and openly supported him.

Biden has a problem in swing states with their cherished constitutional right to bear arms. Trump is running ads about this to warn voters that Biden and Harris have pledged to end this right and confiscate their guns, of particular importance to Wisconsin, Pennsylvania, Michigan, Minnesota, and North Carolina.

While Democrats want to end the right to bear arms, they refuse to enforce the law against gangs that use violence for political protests and push to “defund the police.” Kim Gardner, the George Soros-supported socialist St. Louis prosecutor, targeted Mark and Patricia McCloskey for brandishing their weapons in self-defense. Gardner did not prosecute gang members who broke into the McCloskeys’ community and threatened them.

Trump won in 2016 by promising policies and results nobody could know he would implement and achieve. Former New York City Mayor Rudy Giuliani failed as a presidential candidate because conservatives distrust New York Republicans.

Trump has, as president, sought to carry out what he promised as a candidate. He has achieved impressive results despite unprecedented and illegal efforts to remove him from or cripple his presidency. With his record and credibility, Trump should have even more support in 2020.

Trump supporters are motivated also by Democrats and their media allies demonizing them as racists and bigots. Trump supporters see him as an opponent of the corrupt establishment, and these supporters remain committed to draining the swamp.

The New York City billionaire developer ironically has a deep connection with working-class people. Many who never voted before came out for Trump in 2016. Violent radicalization by Democrats will foment voting from a disillusioned, vilified working class.

Many Trump supporters do not answer pollsters because Democrat allies have become intolerant and violent. Pollsters, unaware the new Trump voters exist, do not account for them.

Trump haters, including GOP never-Trumpers, are confused by and have contempt for Trump supporters. Those with Trump derangement syndrome talk almost exclusively among themselves, leading to a distorted view of the electorate. Media bad faith compounds the distorted view.

They will be in for a surprise on November 3.