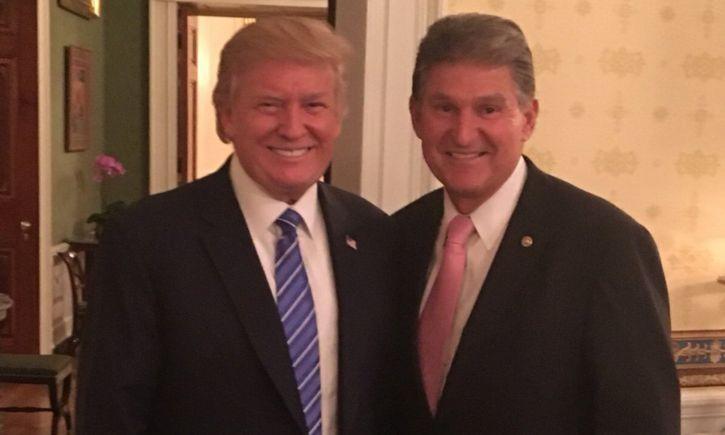 Only Manchin knows if continuing his senate career as a Republican or taking a barrel of money from crony capitalists is more important to him. (Twitter)

Despite Senator Joe Manchin’s assurances to the contrary, voters in Georgia should assume a Democrat-controlled Senate would end the filibuster and pack the Supreme Court.

Manchin told Fox News, “I want to rest those fears … I will not vote to pack the courts [or] end the filibuster.” However, Democrats need a subservient court and a simple-majority Senate to enact their radical plans, and Manchin will have no choice but to comply or lose his seat.

To assure the America-first policy does not return, crony capitalists—including owners of the mainstream media—must assure Democrat control of the three branches of government. For this, Democrats Raphael Warnock and Jon Ossoff must defeat Republicans Kelly Loeffler and David Purdue in their respective runoff elections.

Senator Bernie Sanders said at the 2020 Democrat National Convention, “Many of the ideas we fought for, that just a few years ago were considered ‘radical,’ are now mainstream.” Democrat promises of social justice and free health care and education led Floridians of Cuban, Venezuelan, and Nicaraguan descent to vote Republican. The rest of the country needs to understand they speak with deep knowledge of communism from their countries of origin.

Crony-capitalist, globalist, and socialist policies have harmed working people and small businesses. After positive results from President Donald Trump’s America-first policy, a return to globalism would give Republicans electoral victories in future elections. Only through fraud can Democrats get reelected.

The Biden administration is waiting to squash the Durham and Biden investigations and replace special counsels. Having successfully obstructed prosecutions, Democrats would be vulnerable to them if they let Republicans return to power.

When the Supreme Court refused to hear the Texas case, Democrats in swing states received license to commit fraud. They will continue that in Georgia for the Senate runoff elections and in every election thereafter, aided by a Democrat-controlled Senate.

Democrats intend to pack the Court with judges willing to violate the Constitution to achieve their political objectives. In 1990, Marxists abandoned armed revolts and opted for internal subversion, beginning with the judiciary. Their long march is nearly complete.

We cannot depend on Manchin to prevent the march from continuing.

If Democrats take the two Georgia Senate seats, Manchin will face huge pressure to renege on his promises. If he refuses, Democrats will harm his reelection chances in the primaries. If Manchin reneges, he will stand no chance of reelection in a state Trump carried by 40 points.

Manchin’s Senate career would end as a Democrat, whether he defied his party’s leaders or not. The only way for him to continue in the Senate would be as a Republican.

Manchin could become well off financially if he were to vote to end the filibuster and pack the court. Crony capitalists who took down Trump because of his China policy effectively have unlimited money. They would offer Manchin seats on boards of directors and other businesses. Well-structured deals would not be vulnerable to bribery prosecutions. Plus, Democrat justice would not prosecute anyway.

Only Manchin knows if continuing his senate career as a Republican or taking a barrel of money from crony capitalists is more important to him.

Regarding Manchin’s credibility, we have reliable evidence he shares Democrat principles—none. Manchin voted to remove Trump from office in the Senate impeachment trial.

The impeachment accusation depended upon Trump’s motivation in suggesting Ukraine investigate Biden’s role in firing Ukraine’s prosecutor general. Trump would look bad if he did that to gain political advantage over a potential rival. However, one of his duties, which Democrats always claim they do, is to promote transparency and anti-corruption activities, a noble motive. The difference depends on Trump’s motive, which only he knew.

Only two House Democrats voted against impeachment, and all Democrat senators voted to remove Trump. Manchin showed no independence, principle, or reasonable criteria. Removing a president because of a perceived negative motive when a perfectly good motive was plausible for an otherwise normal act is blatantly partisan and disrespectful of the American people and the Constitution. Manchin disrespected the people of West Virginia.

The media blitz for impeachment in coordination with Democrats and the deep state put pressure on congressmen to close ranks. They did despite knowing Trump would not be convicted. The stakes will be much higher with more pressure if Democrats control the Senate. Manchin’s impeachment performance indicates he will do what is expedient, not what is right.

Loeffler, Purdue, and Trump are correct that the future of liberty is on the ballot in Georgia on January 5. Their opponents refuse to answer questions about ending the filibuster and packing the Supreme Court. They would pack it to impose their agenda and perpetuate their power. Joe Manchin’s promises should fool nobody who cherishes freedom and prosperity.