Guerrilla Warfare in Guatemala Continues by Other Means
Skip to content 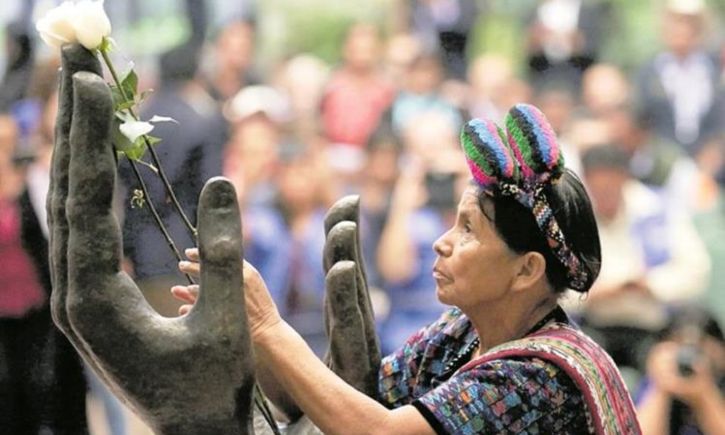 For many guerrilla leaders, members, and intellectuals, the peace accords are how they earn their living. (CICIG)

This article from 2016 is more valid today than when Fritz Thomas wrote it. The guerrilla successors reached their peak of power in 2016, thanks to help from the Obama administration and its point man, Joe Biden. In a betrayal of President Donald Trump, State Department permanent bureaucrats have continued the Biden policy until now.

Former President Jimmy Morales fought the embassy and its criminal battering ram, the International Commission Against Impunity in Guatemala (CICIG), and expelled it in 2019. The CICIG’s principal function had been to secure for the guerrilla successors control of the country’s judiciary and criminal prosecution. Without the CICIG’s ability to illegally imprison political enemies, the guerrilla successors have been unable to impose their allies on the judiciary—the key to their agenda.

Now that Biden has procured the US presidency, his administration will insist on a new commission to assure control of Guatemala for the guerrilla successors. As Thomas says, they will continue to push for their corrupt view of the peace accords—total power for them—using confrontation, division, and conflict. Since that formula worked to make Biden US president, we can expect him to continue his support for its use in Guatemala.

War by Other Means

The guerrilla faction in Guatemala’s long internal conflict was defeated militarily and lost the war—but it won the peace. The dictum that “history is written by the winners” did not apply. One needs only look at school textbooks, books, research papers, and pamphlets on the issue, at what is taught in universities and what is discussed in the media, to realize that the politically correct version of the war is that of the guerrillas.

The leading interpretation of the peace accords is that the guerrillas forced the army and the Guatemalan state to accept or grant democracy and social justice. From that point of view, the peace accords are a roadmap for progress and justice. Had it not been for the guerrilla armed struggle, the argument goes, the Guatemalan state would not have taken the path toward progress and social justice.

The underlying message is that the guerrilla side was the just one, for the people, whereas the army and the government’s side was the unjust one, against the people. This message does not tell the truth, but it is the one that has prevailed.

The military officers who defeated the guerrillas are in jail. The guerrilla leaders, on the other hand, have taken up jobs as directors, secretaries, coordinators, and advisors at “peace” ministries, secretariats, programs, offices, and patronage fiefdoms that have bloated the bureaucracy and bleed the public budget dry with chimeras that contribute no progress to Guatemala.

Contrary to how they see and like to show themselves, the guerrillas are no longer in the opposition. They have become the establishment, including vice president Eduardo Stein and his people, and Sandra Torres of the UNE party and her followers. Even Miguel Ángel Sandoval, aka El Zurdo, ended up as an advisor to the head of Congress.

They run NGOs, “protest” movements, and research centers. The more they victimize themselves and make Guatemala look bad, the more funds they raise from Europe and the US Agency for International Development. They changed their religion and went from communism to environmentalism and indigenism, but their catechism still is class warfare and their devil is the same: capitalism, businesspeople, and multinationals.

As of late, the devil’s instrument is neoliberalism, with which it “dismantled” the Guatemalan state by privatizing “social services”—telephone services and electricity. Thanks to the neoliberal whip, they say, the “ruling class” grows rich at the expense of the poor.

For most people in Guatemala, the peace accords are irrelevant and have not affected their lives beyond putting an end to the subversive guerrilla warfare that kept the country hostage. For many guerrilla leaders, members, and intellectuals, the peace accords are how they earn their living. Everything is measured against these accords and every social ill stem from a failure to comply with them.

Injustice, crime, racism, gender discrimination, not to mention poverty, malnourishment, lack of education and health care, are all allegedly the result of not complying with the peace accords.

This article was translated from the original in Spanish published on Prensa Libre.