How Haiti Became the Republic of NGOs
Skip to content 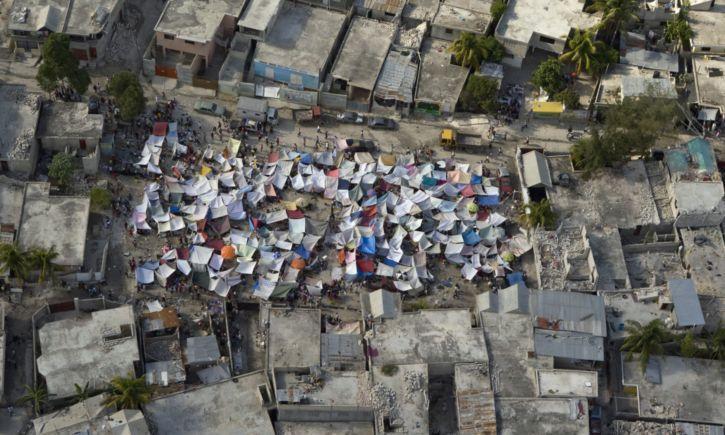 After a 7.0-magnitude earthquake devastated Haiti in 2010, a tsunami of NGOs washed ashore to help with the recovery. But just like disaster and poverty, they never left.

Haiti, an island in the Caribbean Sea, is home to so many nonprofits and has received so much aid it has been dubbed the Republic of NGOs. Despite all the foreign aid, the country is still home to famine, underdevelopment, and corruption.

Although it shares the Isle of Hispaniola with the Dominican Republic, Latin America’s seventh-largest economy, Haiti is the poorest country in the entire Western Hemisphere.

Haiti’s government is highly dependent on outside funds. Foreign aid covers 60 percent of the annual national budget, and remittances account for almost 30 percent of the country’s GDP.

Furthermore, a decade after the earthquake, 38,000 people still live in temporary shelters or slums without access to basic services. Food insecurity affects 40 percent of the 11.1 million inhabitants.

Given most Haitians live in vulnerable conditions, natural hazards and other crises have interrupted recovery again and again. These include Hurricane Matthew in 2016, the cholera epidemic from 2010 to 2019, and the ongoing COVID-19 pandemic.

This has translated into severe political instability. Over the last 35 years, Haiti has had 20 presidents. In July 2018, the country experienced an outbreak of violence that resulted in ongoing protests, economic shutdowns, and national strikes.

The pandemic-related measures have brought Haiti even more political and civil unrest. In February 2021, Haitians took to the streets to demand President Jovenel Moïse leave office after completing his five-year mandate. Instead, he deployed the armed forces to remain in power. A coalition led by the United States, Canada, France, Spain, Brazil and the Organization of American States supports his presidency until 2022, provided he ensures fair elections then.

What kind of projects do NGOs undertake in Haiti?

Although 11 years have passed since the earthquake hit, most NGOs continue to provide relief aid and conduct projects with short-lasting impact.

Due to rampant corruption and political instability, most NGOs do not work with government officials. International organizations are usually the nexus for cooperation and joint efforts.

However, criticism and controversies have emerged and tarnished the nonprofit sector. The United Nations acknowledged 29 sexual assaults and 55 cases of sexual exploitation perpetrated by UN soldiers. Oxfam was expelled from Haiti in 2018 for similar reasons, and the Red Cross and other charities have been accused of mismanaging and wasting funds pledged for relief.

How much aid has the international community provided to Haiti?

As of January 2020, the government agency in charge of managing foreign aid received $11.6 billion to finance 2,552 projects for post-earthquake recovery. In 2020, the US government’s total contribution to Haiti was $100 million, aside from $16 million for COVID-19 measures. The cumulative US total is $1.8 billion since 2011.

The government, however, has only received between 15 and 21 percent of longer-term relief and just 1 percent of all humanitarian aid. Everything else has been channeled through humanitarian and development nonprofits.

Private contributions to NGOs are difficult to estimate. Research published in the Journal of Haitian Studies found out these donations totaled $3 billion from 2010 to 2015.

The study also identified that nonprofits have limited accountability, despite using public funds and posting poor outcomes. Moreover, NGOs have conducted few or no evaluations.

Jean Ronald Joseph, professor of political science at the State University of Haiti, asserted “The government’s response, as well as that of the international community after the earthquake, was a disaster. They ran a ‘humanitarian business’ and stole a lot of money.”

Are NGOs contributing to Haiti’s relief and development?

Despite the best of intentions, official foreign aid has contributed to Haiti’s economic stagnation. Corruption and mismanagement have plagued nonprofits, so far from every dollar from international aid and private contributions has reached Haitians.

Jean-Ronald Jocelyn, an education program manager at Hope for Haiti, told American Magazine, “NGOs help poor people but do not help them to get out of poverty.” Since most NGOs run charity programs, they have created a culture of dependency.

Regarding US aid, most money ends up in the pockets of US companies or aid agency employees. Moreover, since virtually all aid comes from nonprofits, Haitians have lost confidence in institutions, weakening governance and democracy.

Since the government lacks funds and personnel, NGOs continue to step in. Although short-term support is needed for survival, it creates a vicious cycle of chronic poverty and humanitarian relief.

What can Haiti learn from neighboring Dominican Republic?

Although Haiti and the Dominican Republic share the same geographic conditions, both countries took different paths since colonial times.

The Haitian territory became home to hundreds of thousands of slaves from different African countries and cultures who tried to grow cash crops. In contrast, the Dominican Republic hosted a more homogeneous population whose main economic activities were cattle-grazing and gold-mining.

At present, the Dominican economy is over six times larger than Haiti’s. Three main features set both apart: a 50-year democratic political system, a risk-prevention approach to natural disasters, and a vibrant tourist economy.

Haiti ranks 170th out of 180 countries in the Transparency International’s Corruption Perception Index (CPI). The current ruler Moïse is planning constitutional amendments to stay in power and tighten control over the population.

Although the Dominican Republic ranks 137th in the CPI, its institutions are fairer and more stable than Haiti’s.

The Dominican Republic ranks 90th, out of 128 countries, in the World Justice Project’s Rule of Law Index. The country performs better on order and security, fundamental-rights protection, transparency, and constraints on government powers.

Haiti only has one preferential trade agreement in force, and trade barriers are extensive and time-consuming. Starting a business means prohibitively expensive procedures for most Haitians.

Most economic transactions occur outside the formal banking sector, and the labor code discourages job creation. While the government maintains subsidies, particularly for the energy sector, Haiti’s public debt accounts for 47.7 percent of GDP.

Whereas Haiti ranks 155th out of 178 countries in the Heritage Foundation’s 2021 Index of Economic Freedom, Dominican Republic stands at 88th. Public debt is slightly higher than Haiti’s, but doing business is easier and faster than in the neighboring country.

The Dominican Republic has four preferential trade agreements in force and does not discriminate between national and foreign investment. It has thriving financial and stock markets, and 60 percent of adults have access to formal banking.