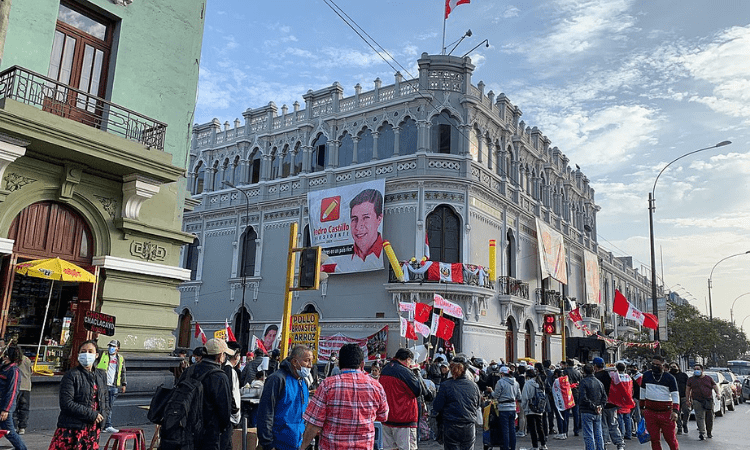 Castillo and his supporters sought to secure their victory long before election day. (Gatodemichi)

One month after Peru’s runoff election, the National Electoral Board (JNE) has yet to announce the new president. Results favor Marxist hardliner Pedro Castillo, but his contender Keiko Fujimori is not going down without a fight over what she claims was a stolen election.

The Organization of American States (OAS) and the US Department of State are turning a blind eye to popular discontent over the results—in the latter case even calling the election a “model of democracy in the region.” The two institutions have disregarded fraud allegations and risk legitimizing socialist domination of a key South American country. Given Castillo’s lead over Fujimori is less than 1 percent of votes, around 44,000, rushing to declare a leftist radical the winner betrays a political agenda.

Polling firm Datum International surveyed 1,200 people across the country and found out 65 percent, including Castillo and Fujimori voters, believe there was fraud. Further, the JNE must rule on 370 complaints of ballot irregularities.

Even if the difference ends up not being the result of ballot tampering, Castillo and his supporters sought to secure their victory long before election day. Tried-and-true tactics common among left-wing movements in the region paved his rise.

The 2017 bribe scandal involving Brazil-based construction giant Odebrecht made waves across Latin America, including Peru. In 2018, then-President Pedro Pablo Kuczynski (PPK) resigned after an inquiry commission found his companies received almost US$5 million from Odebrecht in 2004 and 2007, when he was the economy minister.

During his tenure, Vizcarra managed to impose his socialist allies in the courts and the electoral authority, like the US embassy and UN-backed CICIG did in Guatemala. In late 2020, however, prosecutors unveiled corruption involving Vizcarra, and Congress voted to remove him permanently.

In the end, the leftist coalition regained power in Peru; Francisco Sagasti of the socialist Purple Party and Mirtha Vázquez of the Marxist party Broad Front became the president and vice president. They kept Vizcarra’s allies, including JNE members, in their posts.

Rigging the Electoral Board

Five magistrates constitute the JNE, Peru’s last arbiter in electoral matters. Due to a legal challenge, the bar association could not appoint its representative to the JNE in time for the election, so it went ahead with only four JNE members. In case of a tie, JNE President Jorge Salas gets the casting vote.

Salas’s past is telling. As a college student, he was an outspoken leftist activist. As an attorney, he represented defendants tied to the brutal Peruvian left-wing guerrillas Shining Path. The administration of Alberto Fujimori, Keiko’s father, was responsible for defeating those rebels in the 1990s.

Lawmakers have accused Salas of unduly favoring former president Vizcarra’s congressional bid. He not only allowed Vizcarra, who failed to disclose financial interests as required by law, to proceed with his campaign. He also voted to block other candidates from running for president, such as the well-known journalist Francisco Diez Canseco and the former Ica Governor Fernando Cillóniz.

According to Daniel Córdova, a former Production minister and businessman, the Marxist tactic was to take over rural polling stations where Fujimori’s party had little reach. In these places, the runoff results changed dramatically compared with those of the first round.

In the runoff, Fujimori got fewer votes against Castillo than in the first round against 16 other candidates. Further, most blank ballots disappeared.

Peruvian intelligence expert Arturo Arriarán has told the Spanish outlet Libertad Digital 8,400 electoral records were tampered with to include votes by children and the deceased. He believes the records were altered after polling stations closed or during digitization. Around 400,000 votes are at stake, according to Arriarán.

On June 23, JNE magistrate Luis Arce publicly protested the lack of transparency and blatant bias within the electoral authority. In an open letter, Arce claimed he and other JNE officials witnessed external meddling during the election.

“Against the will of the people,” Arce asserted, “there are decisions that will impede truth from emerging…. All seems to have been orchestrated since long before.”

Because Salas effectively controls the JNE with his casting vote, Arce has been unable to mount an opposition. After his statement, Arce warned in his letter he would be subject to political and judicial persecution.

Despite the lack of an official proclamation, Castillo and his allies—the Venezuelan and Cuban dictatorships—are celebrating. Media allies, such as Telesur and France 24, are likewise spreading the narrative that Castillo beat Fujimori fair and square.

On June 26, the São Paulo Forum—the Latin American socialist propaganda machine conceived by the late Cuban dictator Fidel Castro—hosted a conference to “defend popular sovereignty in Peru.” The forum asked for support from progressives across the world.

They are close to achieving their goal. One counterweight capable of turning the tide would be a public statement by the US government to support the recounting of disputed votes. This would reverse the State Department’s inexplicable and treacherous June 22 statement. Peruvians deserve nothing less.