Why Haitians Say Adios to Chile, Voyage to the United States
Skip to content 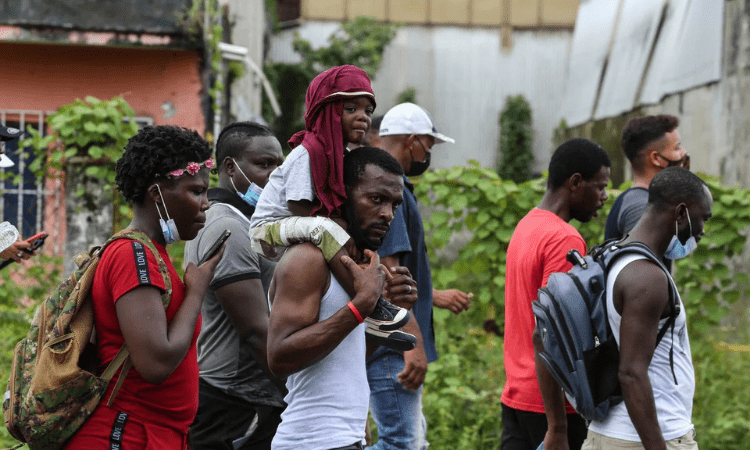 The 13,000 Haitians who gathered outside the US southern border are just the tip of the iceberg. (Azucena Uresti)

In late September, US migration officials dismantled a shelter under a South Texas border bridge. Around 15,000 migrants, most of them Haitians, were waiting to enter the United States on the promise of eased migration policy.

The latest wave of Haitian migrants arriving in the United States is part of an exodus that started in 2010 with a devastating earthquake on the Caribbean island. Although thousands of Haitians first settled in Brazil and then in Chile, they are now moving north as economic opportunities dwindle and migration policies become stricter.

Why are Haitian migrants leaving Chile?

Until 2019, Chile enjoyed political stability and economic growth unlike any other country in South America. It became a magnet for capital, innovation, and migrants. When their exodus began, Hatians did not need a visa to enter Chile, so it was a natural destination for them.

Most migrants fleeing Haiti first settled in Brazil. However, the political and economic crisis that tanked the region’s largest country in 2014 and led to the downfall of the Workers’ Party dashed their hopes. A similar phenomenon is now occurring in Chile.

Eroded socioeconomic conditions—after former socialist President Michelle Bachelet’s reforms—detonated riots and violence in late 2019. That year, the number of Haitians who left Chile actually exceeded those who entered, a trend that continues.

According to the Chilean government, 10,478 Haitians fled the country in 2019, and around 3,500 Haitians have left Chile this year so far. Nevertheless, official data does not include irregular entries and exits, which have increased to avoid pandemic-related border closures.

Haitians who have decided to embark on the 4,700-mile trek from Chile to the United States argue that increasing hostility of natives against them and the dearth of jobs have worsened in South America. Chilean poverty and unemployment rates have hovered over 10 percent in 2020, and the conservative Sebastián Piñera administration has toughened migration policies.

In December 2020, the Chilean Congress passed the Law on Migration and Aliens, a version of a bill that Piñera had introduced during his first presidential term in 2014. The law passed the Constitutional Court’s review on April 20, 2021.

Although government officials have one year to issue regulations, they have already been rolling out measures to control illegal migration to the country.

What is happening at the US southern border?

Alejandro Mayorkas, the US secretary of homeland security, admitted the surge of migrants currently seeking to enter the United States through its southern border is unprecedented. While some are first-time migrants, others have returned after Biden offered to expand the regime for asylum.

From October 2020 to July 2021, the US government encountered 845,307 people trying to enter the country by ground, in contrast to 796,400 spotted during the same period one year before. Since January 2021, the percentage of those under US custody awaiting resolution has increased in comparison to those expelled, reaching 53 percent of migrant encounters in July.

On September 18, the US Border Patrol dismantled a makeshift shelter below the bridge connecting Mexico with Del Rio, Texas, where approximately 15,000 people waited to cross the border. Almost 13,000 of them were Haitians, and the US government expelled them to their home country, even though they came from Chile.

However, the problem is far from being resolved. The Panamanian government has warned that around 60,000 people are on their way to the US southern border. Most of them are Haitians.

According to testimonies from Haitians that were in the shelter on the border with Del Rio, the trip took them more than three months. Since they came together in a large group, they were able to avoid using coyotes to travel. However, given the length and difficulty of the trip, some apparently died along the way. They traveled by bus, car, and, at times, on foot. They communicated via WhatsApp and Facebook to know the easiest, safest places to cross borders.

Biden promised to reform migration policy during his campaign, but the scale of the crisis has been overwhelming. Instead, his administration continues to apply Title 42 from the Trump era. This public-health measure allows for the immediate expulsion of migrants to minimize COVID-19 contagions and employs combative tactics to dissuade illegal border crossings.

How is the Haitian exodus impacting the region and the United States?

The 13,000 Haitians who gathered outside the US southern border are just the tip of the iceberg. Across the region, caravans of Haitians are waiting to cross borders en route to the United States.

The Colombian government reported in late September that around 19,000 migrants were stuck in Necoclí, waiting to enter Panama by boat. Most of them were from Haiti, the rest coming from Venezuela, Cuba, and African countries. Only about 250 can get boats to cross daily.

Alternatively, to go from Colombia and Panama, migrants can pass through the dangerous Darien jungle. There the power of organized-crime groups has increased along with migrant flows.

The Mexican government has attempted to dissuade migrants from continuing their journey north by holding them back at its border with Guatemala. Although Mexican officials were able to apprehend 63,000 migrants in September, many others eluded controls.

Since undocumented Haitian migrants cannot return to Chile and do not want to go back to their country, which remains mired in poverty, many are staying in Mexico. However, Mexico has limited capacity to absorb more migrants or offer them asylum.

Between January and August 2021, the Mexican Commission to Assist Refugees received an unprecedented 77,559 asylum requests mostly from Haitians and Hondurans.