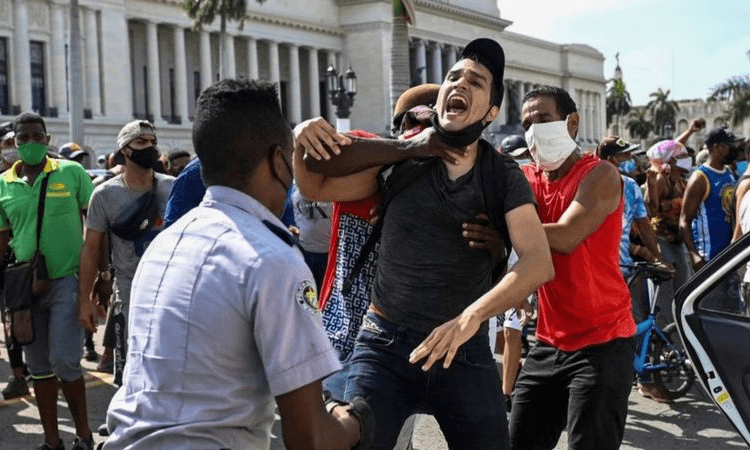 Thousands of people, mostly young, marched in the streets of Havana, Bayamo, and 12 other cities across the island. (@GlendaAhora)

The Communist Party has dominated Cuba for the past 63 years. However, in 2021, the dictatorship faced some of its stiffest opposition ever. Thousands of people, mostly young, marched in the streets of Havana, Bayamo, and 12 other cities around the island. Fidel Castro and his brother Raúl led the so-called revolution for almost 60 years. Miguel Díaz-Canel is now the president of Cuba and leader of the Communist Party.

Despite the change of the guard, Cubans are increasingly expressing their discomfort and discontent with the regime and living conditions through massive protests. The Justice Department is now prosecuting hundreds of citizens who protested in 2021.

In July 2021, citizens reported massive protests in cities such as Santiago de Cuba, Havana, Holguín, and Cienfuegos. Cubans voiced their displeasure with the government regarding its mismanagement of the pandemic and the lack of COVID-19 vaccines. However, their main complaints were regarding the economic crisis and the government’s infringement of civil liberties across the island.

The July 11 gatherings against the Communist Party dictatorship were among the largest and most widespread in decades. The internet played a significant role in diffusing the campaigns unsympathetic to the autocratic government.

Conversely, the Cuban government threatened the protesters and declared, “The government is willing to do anything to defend the revolution, and we will be fighting in the streets.” Further, dictator Díaz-Canel threatened, “There will be a revolutionary response against the protests.” The official responses illustrated the authoritarianism and lack of freedom Cubans have lived under for decades.

While the Cuban government has the army in its power, the protesters had the internet and social media as a fundamental weapon against tyranny. A recently released song called “Patria y Vida” impacted the July 11 demonstrations. The phrase references the regime’s motto “Patria o Muerte,” which alludes to the defense of the revolution. The song went viral, got millions of views, and won two Latin Grammys. “Patria y Vida” was the anthem of the protests.

The presence of the internet distinguished these protests from others in the past. Social media had an impact not only on the island but in other countries like the United States, Chile, Honduras, Brazil, and even France. Consequently, people across the world rallied in support of the Cuban uprising against the dictatorship.

What Came After the Protests?

In an attempt to show its power, the Cuban government started a legal campaign against the protesters. It accused participants of sedition and vandalism in public areas. Thus, the regime began imprisoning people that had any involvement with the social outburst in July 2021.

The regime is subjecting Cubans to inhumane conditions and human-rights violations. The government is progressively increasing the criminalization against Cubans who oppose the government. Prisons on the island are overflowing with political prisoners. Merely speaking out against the status quo can land people in jail. The state accuses people of being traitors in a scheme organized by the United States, a purportedly evil empire that must be defeated.

As soon as the social outburst died down, the retaliation by the Cuban government started. The regime began persecuting people, including minors, who had taken part in the massive protests—sentencing some of them to more than 20 years in prison.

What Is Going on Now?

According to Cuban social organizations Justice Cuba 11J and CubaLex, 1,397 individuals were abducted or imprisoned after the July 2021 strikes. The organizations released these numbers more than six months after the social outburst due to the difficulty of confirming the disappearances with families and social circles.

According to the Cuban Justice Department, nearly 800 people were prosecuted for protesting, including around 50 minors. The numbers presented by the governmental institution are significantly lower than those presented by social organizations.

The state’s trials against Cubans are now starting to take place. As expected, these processes are filled with irregularities and violations. According to the Cuban Constitution, protesting against or trying to end socialism in Cuba is prohibited.

The trials violate basic protocols and guarantees according to the representatives of NGOs such as Human Rights Watch (HRW). Juan Pappier, an HRW senior Americas researcher, claims that there are irregularities in the case of Brusnelvis Adrián Cabrera Gutiérrez, a 20-year-old protester who is in prison facing a 15-year sentence. However, Cabrera’s case is just one in a long list of hundreds of similar cases filled with irregularities and basic rights violations by the Communist government.

The Cuban Justice Department is sentencing some activists to 20 years in prison due to their participation in the rallies against the government. The institution is judging most of these peaceful protesters as if they were participants in violent acts against the Cuban state and its authorities. According to the law, some of these individuals can be charged with the death penalty for protesting against the government.

According to local media, over 700 people remain in prison for participating in the July 11 protests. The government is also still investigating around 600 citizens who were already released from jail. The treatment of the imprisoned protesters includes violence and torture by the authorities, according to a letter published by the social organization Cubalex. Mailene Noguera, a protester, claims the government is torturing prisoners and discriminating against Afro-Cubans.

While the trials advance, families and activists are trying to get the attention of Cubans and the international community to generate pressure on the judges. However, most of the convictions thus far have been disproportionate and a means of political persecution. The US embassy in Cuba claims that the regime is harassing the families of protesters on the island, further exacerbating their plight.