Sandinista Show Trials Eat Their Own
Skip to content 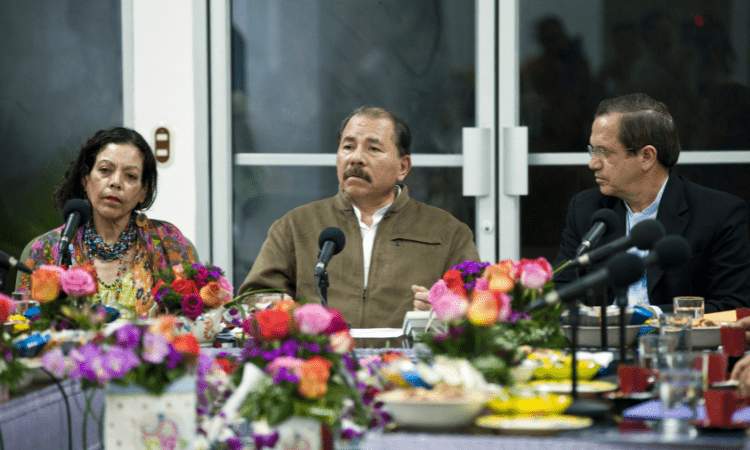 The Sandinista guerrillas in which Ortega was a commander deposed the Somoza regime. (Wikimedia)

Having stolen last November’s presidential elections, the Ortega-Murillo regime in Nicaragua began the second phase of the political purge it started in June 2021. The Sandinista ruling couple then kidnapped 46 prominent citizens. All received charges under recently confected laws that dispense with habeas corpus and criminalize criticism of the regime. The regime views such criticisms as treasonous.

On February 1, show trials began for those abducted. Ironically, February 1 is Anastasio Somoza García’s birthday, the founder of the dynasty that ruled Nicaragua from 1936 to 1979. The Sandinista guerrillas of which Ortega (center) was a commander deposed the Somoza regime in 1979. In another layer of irony, Ortega is now the founder of a new political dynasty ruling over the troubled country he claimed to liberate.

The Sandinista show trials have an infamous communist pedigree. Show trials originally appeared in Moscow during the twentieth century, between 1936 and 1938. They were part of a Stalinist purge unleashed against former co-revolutionaries, the Trotskyists, and any opponents real or perceived. All defendants were found guilty, and most were executed.

Show trials are strictly political. By their very nature, they have nothing to do with the administration of justice or the pursuit of truth. Show trials are an instrument of power. As instruments, they target political opponents for elimination under a thin veneer of legality, seeking legitimacy for international purposes. The intention is to persecute, not prosecute.

The defendant’s guilt is predetermined. The extent to which the trials introduce evidence supporting accusations is fabricated into reams of regime propaganda. The typical charges are corruption, treason, sedition, betrayal of the people, counter-revolutionism, and terrorism. The predetermined verdicts and punishments are not an expression of justice. They are threats to anyone inclined to oppose the regime. The trials exact vengeance and seek to instill terror in the population.

The present-day Managua show trials are variations of Stalin’s. Nicaragua, like Venezuela, is a member of a sisterhood of Latin American nations calling themselves ALBA (Bolivarian Alliance for the Peoples of the Americas). They claim to be in pursuit of socialism for the twenty-first century, implying that their new socialism is better. Sadly, twenty-first-century socialism is remarkably like that of the twentieth century.

In Managua, the Ortega-Murillo tyrants have persecuted and punished opposition figures, potential rival presidential candidates, peasant and student leaders, independent journalists, and uncooperative businessmen. The fabricated charges pretend to prove sedition, corruption, and treason. Among the accused, just like in Stalin’s 1930s version, are a few revolutionary former allies of the ruling couple. Revolutions still eat their own with similar rapacity in this century.

For instance, Victor Hugo Tinoco served the Sandinista party (FSLN) as deputy foreign-affairs minister and as Nicaragua’s UN ambassador. He was sentenced to 13 years in prison for “conspiring to undermine the national integrity and to damage the Nicaraguan state and society.” Similarly, Dora Maria Téllez–once an intrepid revolutionary guerrilla commander–is a former vice president of the Council of State and former Sandinista minister of health. She was also condemned to 13 years in prison.

Tinoco and Téllez are 69 and 66 years of age, respectively. Given the conditions under which the regime currently keeps its prisoners in the Managua dungeon known as El Chipote, 13 years is effectively a life sentence. Former Sandinista fighter and retired General Hugo Torres recently died after eight months in El Chipote. Torres never got to stand in front of the court and have his own show trial. Torres was also a Sandinista hero. He saved Ortega and many others from prison in a 1974 raid that captured members of the Somoza government at a private party and exchanged them for political prisoners.

The above-mentioned prisoners once shared Ortega’s revolutionary zeal. All participated in Nicaragua’s revolutionary government. Tellez and Torres were Sandinista guerrilla fighters. At various points in the last 25 years, each broke away from the Orteguista faction of the Sandinista party and became either critics or active opponents of the Ortega-Murillo clan and their chokehold on power. In their view, Ortega-Murillo betrayed Sandinista ideals and amassed wealth and power in the same manner they claimed the Somoza dynasty did in the twentieth century.

The Managua show trials have surprised those who harbored the hope that Ortega-Murillo would soften their stance and liberate the prisoners after stealing the November election. They are surprised that a solidifying Stalinist disposition emerged instead of dialogue as Nicaragua heads down a path to totalitarian hardship.