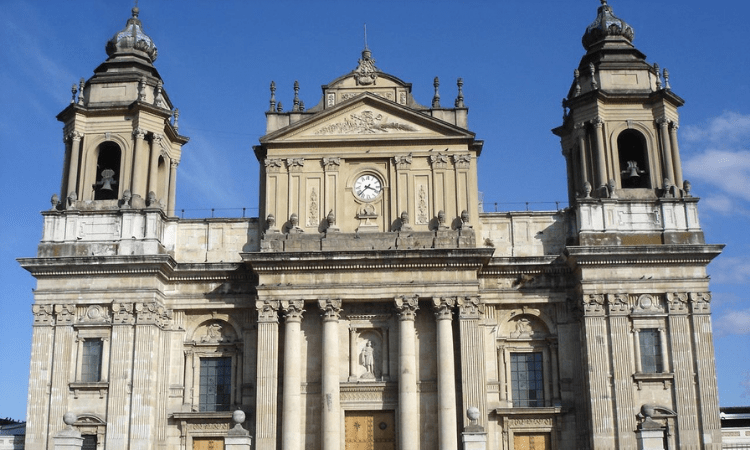 In Guatemala, conservative Christians are, indeed, politically active and influential. They enjoy a wide popular base. (Wikimedia)

In December, President Alejandro Giammattei announced Guatemala would be declared the “Ibero-American Pro-Life Capital” on March 9, 2022. US journalist Jonathan Larsen then published a smear article entitled “How the Family won Guatemala.”

This was the typical progressive hit piece from an anti-Christian publication. Its contorted account promoted the Biden regime and the State Department (DOS) agenda for Guatemala. While respecting constitutionally guaranteed individual rights, Guatemalans overwhelmingly reject Larsen’s brand of LGBT and gender politics.

Larsen targets two associated Christian groups: Guatemala Prospera and one that he refers to as the Family, which runs the National Prayer Breakfast. Supposedly, these organizations have conspired with US conservatives to resist anti-corruption initiatives in Guatemala.

In Guatemala, conservative Christians are, indeed, politically active and influential. They enjoy a wide popular base, as the Pew Research Center documented many years ago. That is a widely understood, bottom-up phenomenon. Neither the Family nor Guatemala Prospera can take credit for this constituency, as Larsen disingenuously implies.

The fact that religious conservatives influence elections in Guatemala only highlights the legitimate reasons why many Guatemalans resent interference from progressive, foreign, and left-wing politicians and international organizations. Guatemala is a conservative country and elects politicians who espouse conservative views.

Though progressive foreigners harp on about fighting corruption in Guatemala, which is a serious problem, many Guatemalans simply do not trust them. The perception is that foreigners care not about corruption but about a progressive agenda for Guatemala.

This view is not without basis. In 2017, Catholic Bishops in Guatemala informed the Vatican of the influence of external groups promoting “gender ideology, abortion, and homosexual marriage.” Bishop Gonzalo de Villa, hardly a right-wing firebrand, stated:

“These organizations have great economic power, a high capacity for penetrating the media, and they enjoy the support of UN agencies in imposing upon this small country and its weak government a political agenda geared towards adopting these laws.”

The Evangelical movement has surged in Guatemala since the 1970s, and US evangelicals have cultivated relationships with Guatemala. At that time, the head of state was General Efraín Ríos Montt. He was known at the time for espousing Evangelical Christian views. US President Ronald Reagan, who also enjoyed evangelical support, naturally took an interest in Guatemala. He was committed to combating the communist onslaught in Central America, and Evangelical Christians were a natural ally against godless communism.

Exhortations from the Christian community eventually led President Jimmy Morales (2016–2020) to transfer the Guatemalan embassy in Israel from Tel Aviv to Jerusalem. This led to fears in DOS circles that the move would bring Morales and former President Donald Trump into direct communication, impeding DOS efforts to impose progressivism on Guatemala.

Then Attorney General Thelma Aldana, now a fugitive from justice, was working with the US-backed UN anti-corruption agency (CICIG). They were pursuing a criminal case against Morales’s son and brother over improper documentation of catering services. This event occurred well before Morales’s tenure. At the time, he had not held public office; nor had he even announced his candidacy for the presidency.

The progressive cadre overseeing Guatemalan affairs and the CICIG, however, were hell bent on ousting Morales from office. For a minor matter that would normally have entailed a fine, the DOS, through CICIG and Thelma Aldana, fabricated the charge of money laundering. That would have entailed long, politically driven mandatory sentences.

The allegations of corruption against the Biden family are well known in Guatemala. The views among many business leaders, who follow US affairs closely, is that the US justice system has become dangerously politicized. Many people, therefore, distrust US-style lawfare in Guatemala. Selective justice perpetrated by the CICIG, pushed by the US embassy, generated ongoing skepticism of foreign-imposed persecution in Guatemala.

The woke left’s attacks on conservatism at home and abroad are incessant. Freedom House references opposition to the LGBT agenda and pro-life laws as indicators of democratic backsliding. However, the right to life is enshrined in Guatemala’s constitution, and constituents vehemently oppose the LGBT agenda.

No one should be shocked that a conservative country elects leaders who align with the electorate’s values. Mario Búcaro, Guatemala’s highly regarded foreign minister, is widely respected as a man of faith, as is former Guatemalan Ambassador to the United States Manuel Espina. During his tenure, Espina was successful in establishing ties to influential Republican conservatives, which was part of his job at the time.

On the other hand, UN organizations such as the CICIG get kudos from progressive media for having bipartisan support in the United States. However, the same media portray attempts by conservatives to establish political connections in a bipartisan fashion as nefarious lobbying that must be stopped.

Apparently, bipartisanship means acceding completely to the progressive talking points on Guatemala. Progressives’ real problems with Guatemala’s political leaders do not stem from corruption at all. Rather, progressives refuse to accept that these leaders align with conservative values and positions that enjoy strong political support in Guatemala.