Why the State Department Shunned Guatemalan Business
Skip to content 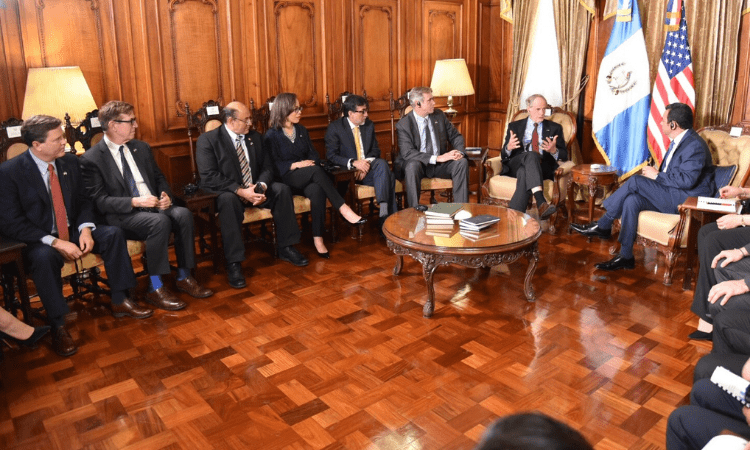 The Biden administration did not invite Guatemala to participate in the Democracy Summit last December. (Flickr)

The US State Department is trying to drive away the private sector in Guatemala in its attempt to control the pending prosecutor-general appointment. In doing so, it is openly working in direct contradiction to its own stated policy in the region.

The State Department has repeatedly sacrificed working with the private sector—which would stimulate employment and deter illegal immigration—to advance the political agenda of its operatives.

At this point, Guatemalan business leaders have no choice but to pursue other options.

The Biden administration did not invite Guatemala to participate in the Democracy Summit last December. This month, the Council of the Americas canceled a conference scheduled to take place in Guatemala. It would have hosted government officials, private-sector representatives, and international participants to discuss Guatemala’s potential to attract investment. All sides of the political spectrum here believe the Council canceled the event under State Department pressure.

Also in March, an Inter-American Dialogue forum on the “Root Causes Strategy” hosted Brian Nichols, the Joe Biden administration’s assistant secretary of state for Western Hemisphere affairs. He received a question predicated on a widely shared false narrative directed against the private sector in Guatemala. Sustained by high-level State Department officials, the narrative is that the organized private sector, specifically CACIF, participates in illegal and corrupt practices designed to obstruct justice.

CACIF is an umbrella organization that comprises important sectors of the Guatemalan economy. The State Department pushes the anti-CACIF narrative because it is hell-bent on co-opting the judicial process. The State Department wants to intimidate the private sector into illegally using its presumed political influence to sway the upcoming election for prosecutor general. What US officials ignore is that the private sector plays literally no role in the election of the prosecutor general in Guatemala.

Nichols gladly accepted the false premise of the question, which gave credence to the charges against the Guatemalan private sector. Nichols stated that, specifically in regard to CACIF, the United States is constantly reviewing possible sanctions for corrupt actors.

A more reasonable answer would have been that the United States constantly reviews its sanctioning authority for corrupt actors from any sector of society. That would be in contrast to specifically singling out the private sector.

The US ambassador in Guatemala, William Popp, recently attended judicial proceedings against Judge Erika Aifán, who serves as an agent of US policy. He did this even though there is credible evidence of wrongdoing by her sufficient to warrant investigations.

Such evidence must ultimately be evaluated in a fair trial with due process of law. However, the presence of the US ambassador in these proceedings is an attempt to intimidate prosecutors and judges into decisions acceptable to the State Department, regardless of the facts of the cases at hand.

The intention of US officials is to intimidate the private sector into believing that their leaders will be sanctioned if the next prosecutor general elected in Guatemala does not have US approval. Keep in mind that the decision to sanction foreign persons is a political decision, not one determined in any court with due process of law.

US officials have been incessantly pressuring the Guatemalan private sector and pushing the false narrative against it to the detriment of foreign direct investment and employment in Guatemala. At this point, it is highly counterproductive and done consciously.

Scaring away investment from Guatemala contradicts official US policy, which is to work in good faith with the private sector to create economic opportunities. The official policy is sound, and Guatemala has much to offer as an economic partner. At the same time Guatemala is a significant source of illegal immigrants trying to take advantage of the Biden administration’s lax border enforcement.

With US help, Guatemala could become a focal point for foreign direct investment in the region. With risk ratings superior to Costa Rica’s, Guatemala has some of the most solid indicators in the world in terms of financial stability, sound banking, low inflation, monetary reserves, low public deficits and debt, and its commitment to free trade. Countries such as the United States and Australia are shifting their economic focus away from Asia, and Guatemala has the potential to exploit that opportunity.

The Need for New Relationships

The conclusion one must draw from the repeated bad-faith actions of high-level State Department officials is that the United States is not a reliable partner and wants to drive investment away from Guatemala. This is puzzling, because Guatemala has been a steadfast partner of the United States and its allies such as Taiwan, Israel, and Ukraine.

Guatemala has options. Not relying on the US government and NGOs in its employ would be a start. The Guatemalan private sector should partner with business and political leaders from any country that is willing to work together in good faith to advance Guatemala’s development.

The US economy and political system are not confined to Washington, DC. Guatemala can still work with other levels of government in the United States. The Gulf Coast states from Texas to Florida are available options for commerce, and the governments in those states are not all in lock-step with the Biden administration. The private sector in Guatemala should explore good-faith business and investment opportunities with all willing partners across the United States and elsewhere.