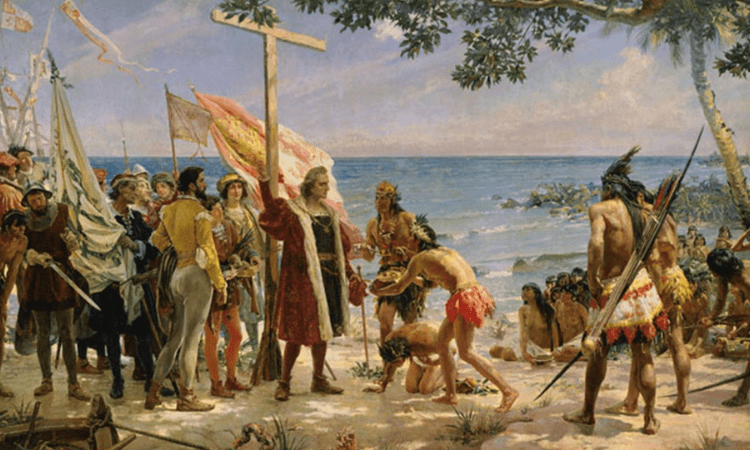 Based on black-legend propaganda, woke narratives have demonized the Spanish colonial legacy. However, the black legend is full of myths. Through to the present day, Hispanic American caudillos take advantage of such sociocultural resentments to gain power and fulfill their political agendas.

Spain, the First Globalization, a documentary released on October 15, 2021, unravels the rhetoric around the Spanish empire’s cruelty and tyranny in Hispanic America. By including omitted facts, the film offers the viewer a more reliable historical account.

The director is José Luis López-Linares, a well-known Spanish filmmaker and winner of Spain’s main national film award—Goya—in 2006. Fed up with common nonsense that claims Spaniards must apologize for their ancestors, López-Linares decided to demystify Spanish history.

A co-production between his company López-Li Films, governmental entities, and civil society, the documentary is the result of a successful crowdfunding campaign. With the support of 1,600 like-minded individuals, the project raised $101,164 from supporters.

López-Linares seeks to reveal the Hispanic legacy and reverse the damage the black legend has done to our cultural identity in Europe and the Americas.

The documentary sends a clear message to the nearly 490 million Hispanic Americans. We must be proud of Hispanic cultural and linguistic heritage and take advantage of the rich legacy and diversity this entails in our path to socioeconomic development.

As a subject of study, globalization started to gain popularity in US universities in the 1980s. One decade later, the term was in everyone’s mouths, once the Soviet Union imploded and China became an emerging power.

However, globalization is a long-standing phenomenon that emerged when societies started trading and traveling. According to the documentary, its origin dates back to when the Spanish empire was at its peak.

In the beginning, the film explains how the Austrians (Hispanics) and the Mings (Chinese), the two biggest empires in the late sixteenth century, negotiated for their economic and monetary interests. China, aiming to get rid of rice as a unit of tax recollection, started to demand silver.

The Spanish empire was the only one able to meet Chinese needs. At short notice, Hispanic silver started to boost the global economy through commerce. If anyone wanted to trade, he would have to use silver. It became the world’s currency.

Few people are aware of this fascinating historical chapter when the Hispanic empire was the engine of early globalization. Scholars have underestimated Spain’s importance in the setting of today’s world. It was a competitive, forward-looking society.

The alternative route that Spanish sailors used to go to the East Indies, an ambitious exploration project, led to the Americas’ discovery. The Hispanic hegemony also allowed the exploration of the Atlantic and the Pacific Oceans. Spaniards improved world-map delineation and adjusted the Western calendar. Intercontinental connections later resulted in a mainstream global paradigm.

In the empire’s twilight years, a new Spanish-led scientific revolution emerged. Many present-day discoveries came from the Gold Century in Spain during the Enlightenment. Many scholars from the so-called Salamanca School led the Spanish Gold Century, which brought important breakthrough improvements in philosophy, law, physics, and economics. Martín de Azpilicueta, for example, started to theorize about value and prices.

The peculiar reputation of the Hispanic empire came from propaganda and misrepresentation by France, England, and the Netherlands. They were Spain’s enemies between the fifteenth and seventeenth centuries, during the Spanish empire’s strongest years.

On the one hand, propaganda manipulates historical facts to make them fit extremist narratives. For instance, the black-legend narrative castigates Spain as the sole Holy Inquisition perpetrator. On the other hand, it includes downright lies, such as the alleged indigenous genocide.

The large Hispanic military force compelled its adversaries to come up with ideas to weaken its global dominion. The Hispanic elite military units serving the Spanish crown had turned into the most frightening infantry in Europe.

Paradoxically, Hispanics started to believe the tale of the black legend—in which Spain is the villain. The myth spread among the Spanish born in the Americas, also known as Criollos. American independence movements introduced this narrative in public opinion.

Likewise, Hispanic American leftist and populist leaders persuade people to judge history under the lens of twenty-first-century ideological trends: identity politics and social justice. They distort history to appeal to large masses, dividing the population between good and evil. They use this to get political victories and stay in power.

In September 2021, during the commemoration of the Indigenous Resistance Day, Venezuelan dictator Nicolás Maduro, asked the Spanish king to apologize for “the 300-year genocide against aboriginals.”

It is improbable that a few conquerors—with no knowledge of the territory and the culture—were able to conquer America without previous alliances with local communities. Many indigenous people sought Spanish protection from atrocities that their leaders committed.

Spain not only conquered the continent, it developed an entire culture, also inherited from Rome. In this way, it left a legacy of mixed races and cultures. The empire’s creation of the Indian Laws allowed every citizen of Spanish-conquered territory to serve the Spanish king. The law included indigenous people.

The film does not persuade viewers to reject the black legend and believe that the Hispanic conquest was a fairytale. Spaniards committed many abuses during their conquests, but that was part and parcel of power dynamics at the time.

By getting to know a counterpart to the black legend, we can approach historical facts and debunk myths spread by caudillos. We can then bury the lies that impede the cohesion of fragmented Hispanic American societies.

Writer and scholar Marcelo Gullo said in the documentary: “He who acknowledges his history, can build his future.” It is illogical to erase every good aspect of history while exaggerating the flaws. Being ashamed of what happened centuries ago and adopting a victim mentality deteriorates the present and sabotages the future.