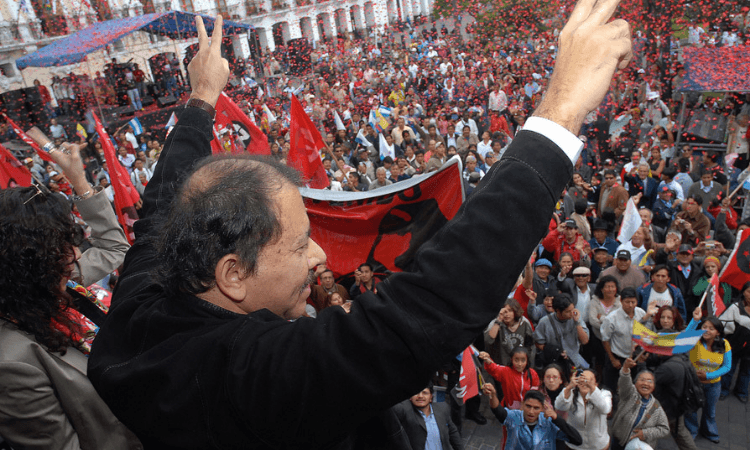 With two trucks and two vans, police agents seized the building and moved OAS equipment out of the office. (Flickr)

On April 24, 2022, the Nicaraguan dictatorship stormed the Organization of American States (OAS) office in the country. Dictator Daniel Ortega’s attack—another step to consolidate his rule—demonstrated the OAS’s inability to preserve democracy and the rule of law.

In November 2021, Nicaragua announced its definitive withdrawal from the OAS. Its charter provides that the withdrawal comes into effect two years after an active member makes the announcement. Therefore, the OAS is supposed to cease its operations in the country in November 2023.

Nicaragua Pulls Out of OAS

After the November 2021 election, Nicaraguan Foreign Affairs Minister Denis Moncada gave notice of the country’s decision to resign from the OAS. The regime decided to pull out of the organization after the 51st OAS General Assembly resolution that denounced Nicaragua’s electoral process.

The resolution stated: “The November 7 election was not free, nor transparent, nor fair. The electoral process does not have democratic legitimacy.” It also mentioned that the “regime has undermined local democratic institutions.” The OAS, however, took no further action.

On March 23, in an unexpected turn of events, Nicaragua’s ambassador to the OAS, Arturo McFields—appointed by the regime—rebelled against the dictatorship. From Washington, DC, he condemned the arbitrary closing of 137 NGOs in previous months and the repression of citizens.

After apologizing to the over 170,000 people who have fled the country since 2018, McFields resigned. Although directly involved, the OAS remained with its arms crossed.

A month later, Moncada reaffirmed Nicaragua’s withdrawal from the OAS after the invasion of the OAS office. Although the building was the property of civilians Luz and María Navarrete, who leased it to the international organization, the police evicted OAS officials.

With two trucks and two vans, police agents seized the building and moved OAS equipment out of the office. Dozens of agents monitored the eviction process and stayed to supervise the building, which the regime now declares its own property.

For years, the OAS had sat back and done nothing to impede dictator Ortega from taking over the country. This specific seizure further undermines OAS authority and shows that property rights and democracy are irrelevant to the Nicaraguan regime.

The international community showed its disapproval. In a press release, OAS member countries declared that this trespass was illegitimate and an international-law infringement. The statement said that Nicaragua’s withdrawal could only occur by the end of 2023 and that Charter Article 33 guarantees OAS immunity in member countries.

In the same vein, EU Spokesman Nabila Massrali condemned the Nicaraguan dictatorship’s invasion of the OAS office. She said it “violates norms from the 1961 Vienna Convention.”

Nicaragua’s outburst against the OAS sends menacing signals abroad. À la Cuba, the Sandinista regime is breaking its international pledges and setting up a repressive machine.

The EU deplores the recent seizure of the @OAS_official premises by Nicaraguan authorities. This violates basic diplomatic norms as per the 1961 Vienna Convention. Nicaragua must abide by its international commitments, notably the 1989 establishment agreement btwn Nicaragua & OAS

Since Ortega reassured his continuity with the fraudulent 2021 election, the dictatorship has stepped up the control of education, clerics, and NGOs. These abuses stem from Ortega’s dominance over the legislative branch, which has backed him by passing repressive laws.

In May 2022, alleging violation of these laws, the dictatorship shut down 50 local and foreign democracy and human-rights watchdogs. These included the River Foundation, the Humboldt Foundation, Oxfam, and Popol Na.

To accumulate power, Ortega has left no room for free media, political opposition, nor civil society. The international community is the new target. Ortega uses his criminal apparatus to scare away international organizations and have free rein to oppress Nicaraguans.

Ortega and his wife Rosario Murillo, who ran for vice president, got more than 75 percent of the votes. Their closest competitor got 14 percent. In the electoral race for Congress, Ortega’s political party, the Sandinista Liberation Front, got 75 seats out of 90.

The absenteeism rate, however, was high. According to the independent organization Open Urns, around 80 percent of voters did not participate. Unsurprisingly, the dictatorship-controlled Electoral Council presented different data. As is usual in socialist, totalitarian regimes in the region, it made the numbers out to show an electoral turnout of more than 65 percent.

Ortega is following the script applied in Cuba and Venezuela to take over these countries. Tactics such as silencing opponents and manipulating data maintain a façade of democracy for socialist leaders in the region.

The regime now has unrestricted executive, legislative, and judicial power and absolute control over the media. Ortega’s latest step to establishing a permanent dictatorship is getting rid of influential international observers.

The invasion of the OAS office spells uncertainty for any international organization active in Nicaragua. Those that seek to restore democracy will think twice before showing their faces in Nicaragua. This event has made clear the toothlessness of the international community to limit a dictator who will move any pieces on his chessboard to oppress his people.