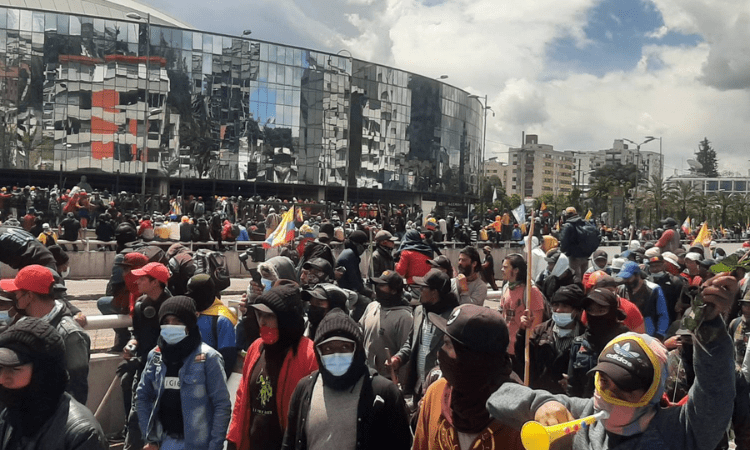 Around 7,000 indigenous people have convened in the capital city of Quito to protest against the government. (DDHH_Alianza)

A series of slip-ups during the first year of the Guillermo Lasso administration have led to violent strikes in Ecuador convened by the national indigenous confederation Conaie. While protesters have argued their motivation is aid for the poor, ringleaders are tied to criminal networks. They seek political destabilization and to oust Lasso from office.

The national strike began on June 13, 2022, with blockades across the country’s main roads and a few fierce confrontations with police and officials. The initial call to protest did not achieve the expected results from Conaie. However, officials hastily arrested Conaie leader Leonidas Iza for encouraging violent disturbances. A strategic error, this action intensified riots nationwide.

In response, the Lasso administration declared a state of emergency for 30 days in nine provinces. Further, the public prosecutor’s office released Iza for lack of evidence, and Lasso made public a list of proposals to negotiate with Conaie.

These actions did not halt riots. Instead, around 7,000 indigenous people convened in the capital city of Quito to increase pressure on the government.

Behind the façade of social-welfare claims, the most radical faction of the indigenous movement—upholding a Marxist agenda—has kickstarted a destabilization plan. They are intent on gaining more political power, weakening democratic institutions, and—if possible— overthrowing the president.

According to official estimations, the private sector has lost around $500 million since the national strike began. Moreover, Ecuador’s risk premium on sovereign debt has doubled since May 2021 and surpassed 11 percent. The risk score, assessed by JP Morgan, responds inversely to investor confidence in Ecuador.

With an inclination toward market liberalization, the ruling party CREO occupies 12 of the 137 seats in the National Assembly. Since most legislators advocate socialism, CREO has struggled to make political alliances. Therefore, the Lasso administration has not been able to enact the ambitious reform package pledged during the campaign to reactivate the economy, expand labor opportunities, and attract foreign investment.

The opposition have also forced Lasso to break his campaign pledge of not raising taxes. In partnership with the political movement of former authoritarian President Rafael Correa, CREO passed the tax reform. Although this has reduced the fiscal deficit, the reform has lightened the pockets of the middle class and entrepreneurs.

In addition to the economic challenges exacerbated by limp leadership, crime rates have risen. Although the figures are far below the most dangerous countries in Latin America, such as Colombia and Venezuela, the murder rate has doubled in three years. The crime rate in 2021 was 14 murders per 100,000 people, in contrast to 7.4 in 2018.

Another topic of public concern is medical care. State-run hospitals and medical centers have constantly run out of medical supplies. The Lasso administration has been unable to resolve this because criminal networks have stolen from and disrupted supply chains.

According to a study of the Lasso administration’s first year done by San Francisco University of Quito Business School, progress has been scant and unsustainable. Out of 12 assessed economic indicators, four—economic growth, economic freedom, trade openness, and deficit reduction—have improved slightly. The other indicators have stagnated or worsened. To be fair, most are difficult to solve in one year.

In 2019, Ecuador witnessed a similar wave of violent riots. The 11-day uprising left a toll of eight deaths, hundreds injured, millions of dollars in economic losses, and damages to public spaces and historic buildings.

The national strike started after then-President Lenin Moreno removed the gasoline subsidy that had distorted the Ecuadorian economy for 40 years. To avoid a coup d’état, Moreno arranged a gradual, incremental subsidy reduction. Lasso halted this reduction in March.

Although justice officials prosecuted perpetrators of violent incidents during the 2019 riots, legislators granted them amnesty in March 2022. National Assembly members argued this was a gesture of national harmonization, but it set a flagrant precedent of impunity.

The latest national strike is not a reaction to an unpopular decree. This time Conaie has presented 10 outlandish requests to the government to appease the violence. While peaceful demonstrations are a civil right, orchestrating criminal riots and damaging private property for a political agenda is not democratic.

Conaie’s petitions include reduced fuel prices, an end to privatization of state-run enterprises and infrastructure, private debt cancellation, and broader labor benefits. These run contrary to economic logic. Ecuador has among the lowest fuel prices and the lowest inflation rates in Latin America. Ecuador’s minimum wage is also one of the highest, and such impositions already stand in the way of many job opportunities for those who need them.

While Ecuador has many other socioeconomic problems that need attention, blocking roads and initiating violence undermines stability, confidence, and prosperity. The national strike and its proposed measures are unfeasible and worsen the very challenges they are supposed to address.

Lasso’s Presidency in the Cross Hairs

On June 23, Conaie has responded to the official concession proposal presented by Lasso and asked for a closed one-on-one dialogue with no mediators.

Rioters have continued to block roads and overwhelm law enforcement. “It is in your hands: face escalating violence or adopt the 10 demands,” the Conaie leader told Lasso in a press conference. However, Lasso simply does not have the power to satisfy these demands, which would leave the country in chaos; the real agenda is Lasso’s ouster.

In his book, Outbreak, Iza justifies the terrorism perpetrated in October 2019: “The light at the end of the tunnel is the beloved, desired, and urgent statement: give us Indian-American communism or suffer barbarism.” With these words, he has declared his goal.

These riots’ modus operandi—road blockades, extortion, raids, and looting—mirrors the violent strikes orchestrated by leftist movements in countries such as Chile and Colombia. They have successfully established a climate of terror, and now they have seized political power too.

The Puebla Group—a Latin American alliance of socialist political organizations—has already indicated its strategy to garner power. With riots, the goal is to create a violent confrontation and then plead to be victims of crackdowns by police and armed forces. The socialist political agitators can then whip up popular outrage and condemn authorities as repressive and “neoliberal” tyrants. Former Bolivian President Evo Morales—Iza’s friend—made a similar declaration in a tweet.

As of the 12th day of the national strike, five people have died due to disturbances. Three were participating in the strike, but two others died because protesters did not allow ambulances to pass through. Rioters have polluted tap water pipelines with engine oil, blocked and trespassed on oil wells, kidnapped judges and police and military officers, and damaged the Public Prosecutor’s Office. Rioters have also burned a police station and a bank branch.

Defense Minister Luis Lara says “These actions coincide with the brutal attack by drug traffickers and organized crime that the country has been suffering from. These actions go beyond citizen protests. They are a deliberate attempt to use private armed forces to infringe upon democracy and threaten our institutions.”

With the largest drug seizure in the country’s history, the government has confiscated 210 tons in 2021 and 80 tons so far this year. This implies an unprecedented defeat to drug trafficking in Ecuador.

Ecuadorians have not recovered from the economic downturn caused by the global challenges of the pandemic and the Russia-Ukraine war. To rub salt into the wound, the country now suffers an economic stalemate orchestrated by terrorist groups. Under the guise of social justice, they seek to impose their political agenda and ideologically driven impunity without playing by democratic rules.