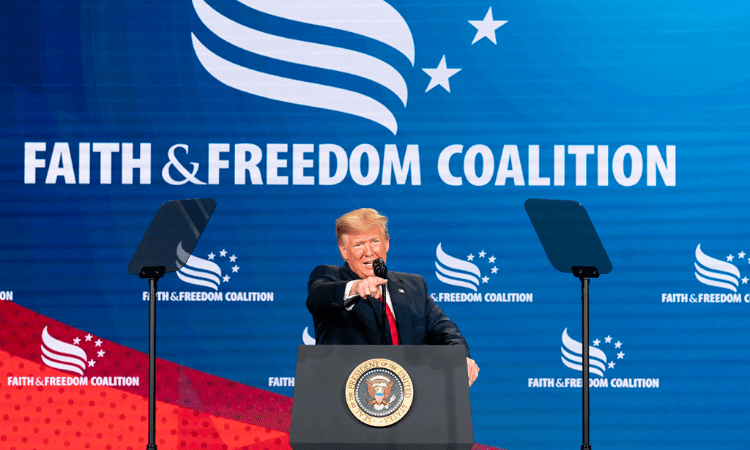 The dominant theme of the Faith and Freedom Coalition’s Road to Majority Conference in Nashville last week was the war between liberty and tyranny raging in our country. However, Democrats and their media partners, such as the New York Times and Politico, centered their coverage on Donald Trump and portrayed the conference as extreme.

The truth is dangerous to the Democrat coalition’s agenda, since they falsely portray themselves as diverse and as protectors of minorities.

Almost all conference speakers described identity politics as racist, bigoted, and against our founding values. Several speakers invoked Martin Luther King, Jr. and his dream that his four children would someday be judged by the content of their character, not by the color of their skin.

Senator Rick Scott (R-FL) and Representative Mark Green (R-TN) talked about the purposeful creation of chaos as a precursor to central government control. This is why Democrat governors and mayors permitted Antifa and Black Lives Matter violence. It is why the Biden regime has opened our southern border, letting criminals enter the country. It is why George Soros has funded prosecutors who facilitate crime and prosecute political opponents.

Had the Senate passed the For the People Act, to eliminate voter ID, and packed the Supreme Court, the United States could have become a dictatorship. The tyrants failed by two Senate votes. Now they must face the electorate in the November midterms, the focus of the Road to Majority Conference.

The tyrannical Democrat coalition has distracted from the truth by focusing on Trump and his speech. Attendees support Trump because his policies coincide with their values and because he confronts the tyrants. His line that garnered the most applause was: “we bow only to God, not to government.”

The tyrants portray attendees and Trump supporters as fanatical cult followers. Instead, the cult label applies to the so-called progressive movement. I did not see or hear one person at the conference who discriminated against another person based on arbitrary divisions. The attendees want to save the United States from the tyrants and preserve her founding principles.

The tyrants’ January 6 committee has broken rules to achieve a predetermined outcome: to demonize Trump supporters as insurrectionists and white supremacists. As typical Marxists, the tyrants are seditious and project onto their enemies what they are and do.

In the woke world of moral relativism, we all have our own truths. This postmodernist illogic clashes with our history and reason for being.

The Declaration of Independence states, “We hold these truths to be self-evident, that all men are created equal, that they are endowed by their Creator with certain unalienable Rights, that among these are Life, Liberty and the pursuit of Happiness” (emphasis mine). Truth is not relative, and the pursuit of understanding it gives our lives meaning and propels us to achieve.

The founders’ truths are an obstacle to the current Democrat Party and its partners. They demonize their enemies to circumvent these truths.

Those who attended the conference do not want to impose any of their policies on anyone. They simply want the Constitution and US law to prevail. The attendees accept being in the minority if we follow the rules.

The tyrants do not. Lacking majority support, they attempt to destroy the Constitution to impose their agenda.

Conference attendees will speak out about and become involved in the midterm elections. They will spread the word about the threat to our values and liberty. They will urge others to vote for candidates who share US founding values.

The tyrants’ actions have converted many people to the side of liberty. Education is the prime example. Almost every speaker at the conference talked about the tyrants’ corruption of education. In communism, the state is mother, father, and teacher. This is the tyrants’ policy.

In the United States, however, parents have the right to educate their children as they see fit. If we fail to reform education, even after a Republican congress and administration, the tyrants will return. The same applies to the federal bureaucracy.

The importance of education is widely understood because all families have children. There is, however, insufficient awareness of the harm the federal bureaucracy does to the country.

Bureaucrats partnered with Democrats and oligarchs and their media to undermine Trump’s administration and prevent his reelection. Representatives Louie Gomert (R-TX) and Jim Jordan (R-OH), Senator Rick Scott, and former Secretary of State Mike Pompeo all mentioned the need to reform the bureaucracy. Pompeo said we have a deep, deep problem with the bureaucracy. He should know, having presided over possibly the most compromised agency in government.

There was increased Hispanic participation at the conference this year. Hispanics are socially conservative and increasingly aware of the tyrants’ threatening policies. Some Hispanics —Cubans, Venezuelans, and Nicaraguans — have fled dictatorships. Most others left their countries for economic reasons, and they are becoming aware that the Biden policies are the same they or their families fled.

Hispanics will surprise pundits this year by voting in a greater percentage for Republicans than ever before. Hispanics now constitute a formidable part of the faith community. Representative Maria Elvira Salazar (R-FL), herself Hispanic, told the conference, “We come to America to escape tyranny, not to bring it with us.”