Why an Iranian Plane Is Impounded in Argentina
Skip to content 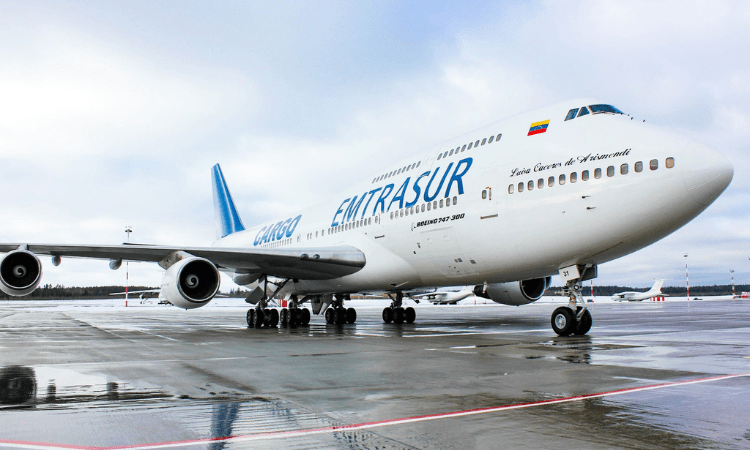 On June 8, 2022, the Argentine government retained an Iranian-Venezuelan airplane at Ezeiza International Airport in the capital city Buenos Aires. The plane—a Boeing 747-300 that the Venezuelan shell company Southern Cargo Airline (Emtrasur) operates—and its crew were traveling across Latin America for a couple of weeks, raising suspicions among authorities.

Argentine Judge Federico Villena is leading the investigation on the Emtrasur Cargo aircraft and its crew. In the meantime, passengers—14 Venezuelans and five Iranians—are staying in a hotel near Ezeiza’s airport. Officials have forbidden them to leave Argentina.

Iran’s presence in Latin America has been expanding as Venezuela has become the arrival point for tobacco shipments—likely for money laundering—and other supplies from the Middle East. Iran’s objectives on the continent are under investigation by Latin American intelligence agencies.

Why Argentina Retained the Airplane

Operated by the Venezuelan carrier, the plane—whose registration number is YV3531—entered Argentina on June 6. It first landed in Córdoba, because of bad weather conditions in Buenos Aires. Then it arrived at Ezeiza.

Due to a US sanction on the aircraft for alleged use in terrorism and weapon smuggling, the aircraft’s crew were not able to buy gas from legal Argentine producers. Oil distributors feared possible retaliation from the United States for selling gas to a US-sanctioned aircraft. This led to suspicions from other countries, including Chile and Uruguay, which eventually closed their airspace to the aircraft.

Two days later, on June 8, the airplane departed for Uruguay. Despite having the appropriate permission to land in Uruguay, Uruguayan officials denied its entrance to the country’s airspace. It flew in circles for more than 30 minutes on the air border between Uruguay and Argentina, before heading back to Ezeiza.

Once the aircraft landed in Ezeiza after Uruguay denied its entrance, Argentine officials withheld the crew’s passports and impeded them from leaving the country. Justice officials took the crew members to a hotel near the airport, where they have been retained ever since.

Venezuelan dictator Nicolás Maduro created Emtrasur in November 2020. The shell company serves as a subsidiary of the Venezuelan Consortium of Aeronautical Industries and Air Services (Conviasa).

The Boeing 747-300—now retained in Argentina—was a property of the regime-subsidized Mahan Air, but Qeshm Fars Air (QFA) was the operator of the aircraft. QFA is an Iranian cargo airline that started operations in 2006. QFA has been accused by the US officials of carrying weapons from Iran to Syria to support Bashar al Assad’s regime. The Iranian carrier Mahan Air provides QFA with operational and technical support.

According to Venezuelan and Iranian officials, Mahan Air sold the detained aircraft to Emtrasur in January 2022. However, international reports suggest the Boeing 747-300 still belongs to Mahan Air, and Emtrasur is leasing it.

Obscure Information on the Pilot

One of the detained Iranians is Gholamreza Ghasemi, the airplane’s pilot. A stockholder, CEO, and director at QFA, Ghasemi is closely tied to and was a member of the Quds Force, the Islamic Revolutionary Guard Corps (IRGC) branch that specializes in military intelligence.

The FBI has detailed Ghasemi’s identity in a written report shared with Judge Villenas. The document reads: “Gholamreza Ghasemi is QFA CEO and director, a company US Treasury Department exhibited in 2019 due to its direct participation in terrorist activity and assistance to the Quds Force and Mahan Air, labeled as terrorist organizations.”

After Argentine officials impounded the crew’s mobile devices upon the plane’s detention, officials found an old photograph on Ghasemi’s phone, where he was wearing an IRGC Quds Force uniform. They also found pictures of tanks, missiles, and a flag condemning Israel.

The airline uses Venezuela as a hub between Latin America and other countries, some deeply involved in armed conflicts. These countries include Iran, Iraq, Syria, India, Belarus, Serbia, China, Mexico, Cuba, Paraguay, Ecuador, and Argentina.

For Joseph Humire, executive director at the Center for a Secure Free Society, Iran uses these flights to transport dual-use cargo to different countries in the region. Dual-use cargo is shipment—of car seats or other metal parts—that does not raise suspicions but is used to build weaponry. Dual-use cargo operations usually hide a military purpose or money laundering.

In Iran (similar to Venezuela), the companies that dominate local markets belong to government officials or people close to them. Therefore, it is common to see trade operations connected with national and international military operations. “Military operations tend to use civil coverage, and what better way to do that than with a cargo airline,” explains Esteban Aquino, Paraguay’s intelligence minister. Aquino says Iran behaves this way worldwide.

After being silent regarding the plane’s detention in Argentina for more than a month, Iran’s Foreign Affairs Ministry issued a statement condemning the restrictions imposed on the five Iranian citizens. Iran officials presented the complaint to the Argentine Embassy in Tehran on July 20. Hours later, the crew’s lawyer requested Judge Villena return their passports. Villena denied the request.

The aircraft and the crew previously traveled to other countries in South America. Ecuador’s Foreign Affairs Minister Juan Carlos Holguín said that the Attorney General’s Office has an ongoing investigation on why the aircraft and the crew members were in the country. Holguín revealed that “Ecuador’s intelligence service is cooperating with its colleagues from Paraguay and Argentina, who are investigating the same topic.”

In an interview with i24 News, Aquino claimed that “the aircraft, with the same crew, was traveling around the world. However, neither the aircraft nor the crew had any alert by Interpol.” He made this statement after the Emtrasur plane went to Paraguay on May 13.

The Iranian presence in Latin America is becoming more prevalent. Maduro’s dictatorship in Venezuela, through the state-run airline companies Conviasa and Emtrasur, has opened the door for Iranian operations in the rest of the region.

Using state-run companies to smuggle dual-use cargo for weaponry, money laundering, and military intelligence form part of Iran’s modus operandi worldwide. While the reason why the Emtrasur Boeing 747-300 was traveling in Argentina and Latin America remains unclear, it has raised concerns about Iran’s increasing presence in the region.