The Criminals behind Blockades Paralyzing Ecuador
Skip to content 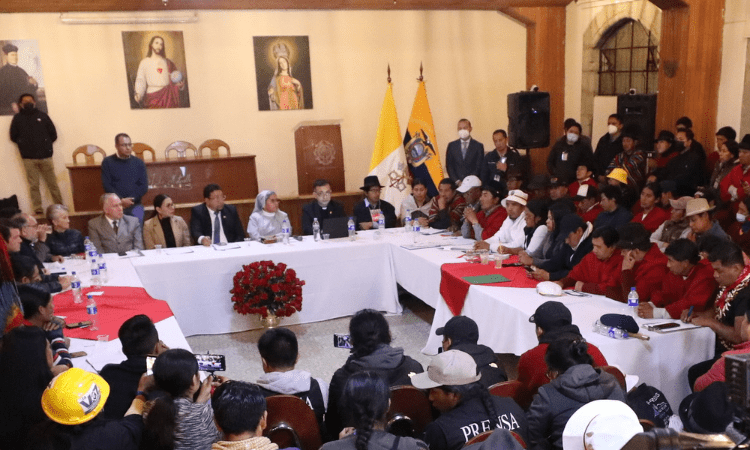 In June 2022, Ecuador was home to 18 days of nationwide blockades and violent riots. Antidemocratic agents—linked to far-left political movements and organized crime—allied to confront security forces, disrupt the rule of law, and undermine democratic institutions.

One of the riot leaders was Leonidas Iza, president of the National Indigenous Confederations (Conaie), who publicly expressed his ambition to gain power, including by force. In addition, there is evidence that rising urban guerrillas participated in the turmoil.

The Impunity Observer has investigated the agents who confronted public forces and their political destabilization strategies. Since most of these irregular groups operate underground, without paper trails, this investigation has relied on a compilation of journalistic investigations and the overlaps between the different agents that had a stake during the blockade.

Conaie started the blockade on June 13 by presenting a list of 10 demands to the government. The public-policy proposals—including lower gasoline prices, debt forgiveness from state-owned banks, and price controls on staple consumer goods—were infeasible. Some actions were not within the president’s authority and some of the demands, if implemented, would have curtailed others.

However, social agitators and professional activists used these demands as populist leverage. Community leaders such as Iza promoted a polarizing atmosphere to attain political victories.

Ecuador’s Production Ministry estimated the national strike’s economic damage totaled $1 billion. Six people died, and over 500 civilians, police officers, and military officials were injured. The toll was worse than in October 2019, when a similar social uprising paralyzed the country’s economy and held its infrastructure hostage.

In the latest riots, assaults included attacks on military convoys in Caspigasí and Shushufindi and destruction of police headquarters in Calderón and Puyo. The Police and Armed Forces Intelligence registered around 5,000 violent acts nationwide. They also found out that frontline demonstrators were members of indigenous guards and Amazonian armies. These are private vigilante organizations that have received military training.

This information regarding the strikes’ severity and breadth has supported the hypothesis that organized crime and urban guerrillas contributed to social disruption. Furthermore, government officials—including President Guillermo Lasso—have accused narcos of financing the protests.

Demonstrators have claimed they were protesting peacefully. However, Ecuadorians have witnessed violent riots and merciless social confrontations since October 2019. In addition to the kidnapping of journalists and the burning of the State General Comptroller Office, the October 2019 strike was the first appearance of subversive armed groups.

In June 2022, the participation of militarily trained gangs became more evident. One of them was the Guevarista Land and Freedom Movement (MGTL). The MGTL was subject to a police raid one month before the national strike due to alleged organized crime, human smuggling, and guerrilla recruitment. Splinter groups of dismantled Colombian FARC guerrillas, such as the Second Marquetalia, have been training the MGTL, according to evidence from the Police. During the operation, officers imprisoned eight people and seized weapons.

The Police Intelligence unit has labeled these subversive armed groups as urban guerrillas. According to Santiago Basabe—a political science professor at FLACSO Ecuador—they operate with national and international commands.

Former Military Intelligence Chief Mario Pazmiño has warned about the reactivation of the far-left group Puka Inti, which has ties to remnants of the Shining Path (Sendero Luminoso) Peruvian terrorist organization. Ecuadorian Military Intelligence dismantled Puka Inti, also known as the Red Sun, between 1992 and 1994. Today, it is reviving and rebranding as the Mariateguista Group.

Regarding Puka Inti, Pazmiño says “It is currently expanding. Puka Inti was the Ecuadorian faction that directly supported the Shining Path. This kind of structure is directly linked to the indigenous movement due to their strategies, the formation of the indigenous army, and its violent ways to take power, confronting public forces and the state.”

Peru’s blood-stained experience in the 1990s with the Shining Path illustrates what violent groups could forge ahead in Ecuador. A common feature among emerging urban guerrillas is their desire to spread far-left ideological doctrines in public opinion. However, they believe that force is the ultimate vehicle to attain political change.

To understand more about the presence of the guerrillas in Ecuador, the Impunity Observer interviewed Leonardo Gómez Ponce, an investigative journalist and founder of the digital media outlet Tierra de Nadie (no man’s land). During the coverage of the 2019 and 2022 riots, Gómez noted that some demonstrator groups had military training. Their coordination was far from being spontaneous.

“Indigenous armed groups have been involved in the 2019 and 2022 strikes. Most of them have certainly received some military training, possibly offered by the Mariateguista movement.” Gómez also mentioned that Iza and the rest of the chief strategists behind the blockades have argued the riots were a success since they shut down the capitalist economy that rules the country.

Pazmiño has identified at least five different military strategies used in the 2022 strike:

In addition to urban guerrillas, the country has become home to international drug trafficking routes over the past five years. Originally only a transit destination, Ecuador has become a drug distribution, exportation, and production center. Busy narcotrafficking activities have converged with rising crime; Ecuador’s homicide rate reached 14 per 100,000 inhabitants in 2021, doubling the 2018 rate.

Many criminal gangs linked to international drug cartels have boosted violence across the country. Prison raids—which have resulted in more than 400 deaths between 2020 and 2022—illustrate the depth of the problem.

According to the last United Nations Office on Drugs and Crime report, Ecuador is the third country in the world, behind only Colombia and the United States, for seized cocaine. The report reveals that, in 2020, 6.5 percent of worldwide cocaine confiscation happened in Ecuador. Guayaquil—the country’s largest city—is home to one of the largest ports used for drug exports.

Lasso said that, in his administration’s first year, police officers confiscated 300 tons of narcotics. The seized drugs average in the last decade has been 50–60 tons per year.

Even if the protests created setbacks for police officers in executing counter-narcotics operations, they did not stop drug seizures. According to data from the National Anti-Drug Department, in the 18 days of riots, public forces confiscated around nine tons of drugs.

Lasso asserted in an interview with Infobae, an Argentina-based publication, that the blockade’s goal was to oust him. He said that emerging political leaders and Correísmo allied in this effort, and narcos joined as a third force to finance the protests with around $15 million. Later, in an interview with Univision, Lasso raised the number to $20 million, and he said he had proof. However, the government has yet to reveal the evidence.

Fausto Cobo, director of the National Intelligence Center, has asserted that narcos and organized crime were involved in the riots. “We have to connect the dots; events are not isolated. They are plotting against the country, involving narco and organized crime’s money,” Cobo told the Teleamazonas TV network.

Through a statement, Conaie rejected Lasso’s declarations. Conaie said these claims were absurd and accused Lasso of trying to stigmatize popular struggles. Conaie also mentioned that Lasso’s words illustrate he is not making an effort to understand indigenous communities.

For Gómez, the president’s allegations were empty words, as he failed to present the alleged proof to the respective authorities. “Simply accusing, without any evidence, is severe and irresponsible, and it paves the way for speculation,” Gómez told the Impunity Observer.

The Point of No Return

The 18-day national strike was only the mise en place of what political leaders have warned is to come. In the book Outbreak—co-authored by Iza—he wrote: “Marx warned that ‘one cannot demolish with pins what one must demolish with hammers’ … The light at the end of the tunnel is the beloved, desired, and urgent statement: give us Indian-American communism or suffer barbarism.”

“From the Marxist perspective, violence is part of human nature … It is not an option but the result of an unbearable situation, which acquires a political character because it is an objection to the prevailing social order,” Iza wrote in his book.

The Ecuadorian government appears to be at a precipice, facing a maturing movement of urban guerrillas, drug traffickers, and other criminal structures. Far-left leaders have shown in words and actions that they are imposing an antidemocratic political agenda in Ecuador with planned instability and crises.