Bannon Is Martyr of Pelosi’s Totalitarianism
Skip to content 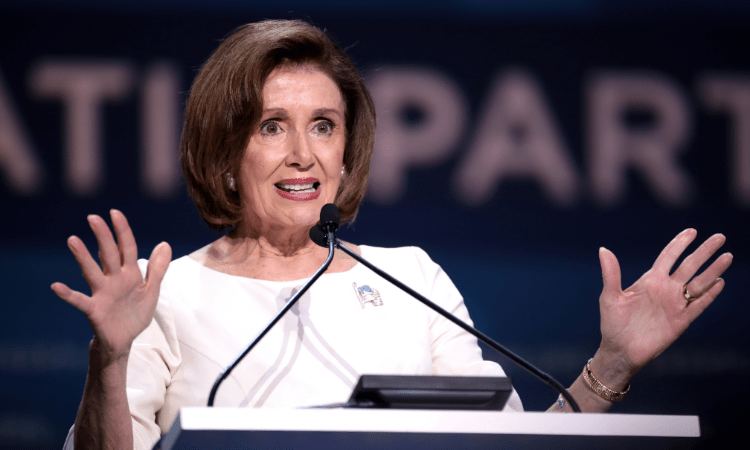 Pelosi visited Guatemala in 2019 and met and posed for photographs with two judges: Yassmin Barrios and Erika Aifán. (Flickr)

The Justice Department (DOJ) on Friday won a conviction against Steve Bannon for contempt of Congress. The DOJ, however, did not charge Eric Holder in 2012, despite a House of Representatives criminal-contempt resolution against him.

Commentators who call this a double standard miss a deeper point. Democrats have only one standard: everything they do is good, and their opponents have no rights.

Fidel Castro said it best: inside the revolution, everything; outside the revolution, nothing. Democrats are not just hypocrites; they are totalitarians. Nowhere is this more evident than in today’s politicized justice. It will turn our democratic republic into a dictatorship if not reversed.

Holder’s DOJ had been involved in Operation Fast and Furious, which permitted gun sales to Mexican criminal cartels. Some of the weapons were used against US law enforcement and resulted in the death of Border Patrol agent Brian Terry.

In contrast, Steve Bannon was not involved in the January 6 Capitol events. The January 6 congressional committee subpoenaed him because he had been at the Willard Hotel on January 5 “during an effort to persuade Members of Congress to block the certification of the election,” as reported by the New York Post.

That is a legal activity Democrats have also performed, as in 2000 and 2016. The committee criminalizes anything against its agenda, even if it is legal. In this case, the committee is weaving a web of fabricated, distorted, cherry-picked, and ignored evidence into the nonexistent crime of insurrection. Its members persecute political opponents for exercising their constitutional rights.

Roger Stone, who left Trump’s campaign in 2015, and George Papadopoulos, not on its payroll, were prosecuted for lying to Congress. Two Obama officials, former National Intelligence Director James Clapper and CIA Director John Brennan, lied to Congress yet faced no charges.

The DOJ’s zeal in prosecuting January 6 defendants has crossed the line into persecution. Holding nonviolent defendants in solitary confinement and denying their rights, including delaying their trials, is not due process.

Attorney General Merrick Garland pledged to “identify, investigate, and apprehend” the perpetrators of the January 6 event. He has not responded to congressional queries about why he has not done so regarding people recorded on camera inciting others to enter the Capitol. The committee has not investigated this.

Not investigating January 6 fully, not prosecuting illegal actions against Supreme Court justices, and acting against parents legally protecting their children from abuse and indoctrination are all politicized justice. Combined with the pass Garland gives to activists in violent demonstrations Democrats call peaceful, this is the Castro standard.

House Speaker Nancy Pelosi created the January 6 congressional committee to promote the insurrection charade as part of Democrats’ totalitarian assault on our democratic republic. She denied Minority Leader Kevin McCarthy the traditional role of naming his party’s members of the committee. Pelosi chose two Republican Trump-haters whose conclusion is foregone.

There have been no cross-examinations of committee witnesses and no investigations of evidence that might lead to any conclusion other than that Trump led an insurrection. The committee selectively releases information and has a former ABC executive producing its hearings. Its subpoenas are purely political to harass and demonize its enemies.

Noted civil libertarian and law professor Alan Dershowitz called Bannon’s conviction “entirely in violation of the Constitution.” The professor also said, “Number one, he didn’t have a fair jury. Number two, the judge took his defenses away from him.” Dershowitz predicts a higher court will “very likely” overturn the conviction.

Flipping the truth in Orwellian fashion, Pelosi tweeted that Bannon’s conviction is “a step forward for justice, reaffirming that no one is above the law.” This is not the first time Pelosi has supported show trials.

Pelosi visited Guatemala in 2019 and met and posed for photographs with two judges: Yassmin Barrios and Erika Aifán. The litany of illegal rulings by these two was extensive.

Aifán openly deprived political targets of their constitutional rights and sent them to preventive detention without evidence, for as much as four years. Aifán was cited for torturing Russian refugee Igor Bitkov, whose case the US Helsinki Commission exposed in an April 27, 2018, hearing.

Barrios sentenced two former military officials to effectively life in prison without evidence. Barrios denied the defendants the right to cross examine the witnesses against them. She accepted illegal documentary evidence on one charge and rejected the same evidence that was exculpatory on another charge.

Mirroring her praise of Bannon’s show trial, Pelosi said the Guatemalan judges “highlighted the importance of an independent judiciary in fighting impunity and corruption.”

Democrats want to pack the Supreme Court to assure cases like Bannon’s are not overturned on appeal. They want the court to be run by political judges like Barrios and Aifán. Biden, Democrats, and the State Department, which honored Barrios and Aifán, did this to Guatemala, and Pelosi praised it.

This is Castro’s revolutionary justice: there are no rules except to apply raw power to punish the enemy. The totalitarian revolution demands it.