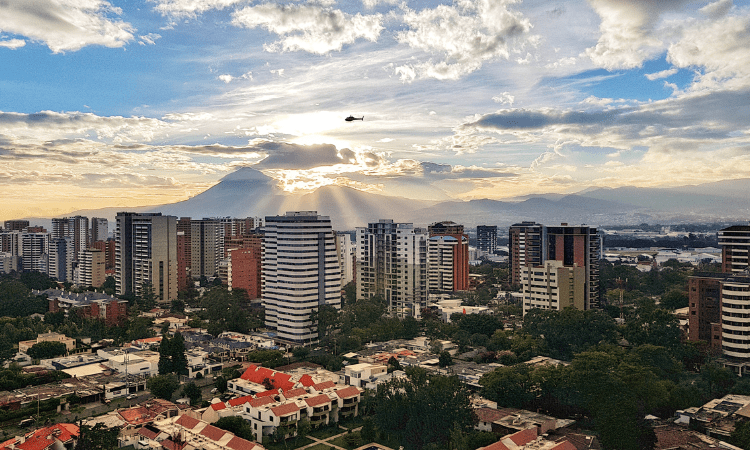 The idea behind official US policy is to spur investment in Central America, particularly Guatemala. (Wikimedia)

Guatemala’s private sector, with sufficient capital, holds the key to the nation’s development and deserves neither condemnation nor faux overtures. Private investment from the United States offers a win-win opportunity for those willing to look beyond superficial caricatures.

Vice President Kamala Harris announced today a Call to Action for businesses and social enterprises to make new, significant commitments to help send a signal of hope to the people of the region and sustainably address the root causes of migration by promoting economic opportunity.…

Vice President Harris is calling on the private sector to draw on its unique resources and expertise to make commitments to support inclusive economic growth in the Northern Triangle. Together, we can work to overcome obstacles to investment, promote economic opportunity, and support long-term development in the region.

The idea behind official US policy is to spur investment in Central America, particularly Guatemala. This would create jobs and hope and incentivize local people not to migrate to the United States in search of economic betterment. This is not a bad idea, even if the messenger lacks credibility.

The Biden administration is to be given credit for the narrative of creating hope as a way to further the officially stated goal of reducing illegal immigration to the United States. In global terms, US GDP per capita is seven times that of Guatemala. This breach will not converge in the foreseeable future. However, Guatemalan incomes need not reach parity with US incomes for the average Guatemalan to decide not to enter the United States illegally to find work and send remittances home.

If more Guatemalans believed economic opportunities were improving in their own country, illegal immigration would decrease. Take Mexico as an example. In the 20th century, the border between Mexico and the United States was virtually open, and Mexicans would cross the border at will. They would come to the United States to work, go back and visit their families, and return again. There was hope in Mexico at the time.

From 1982 to 2018, the Mexican advantage narrowed to 1.9 percent versus 1.6 percent for the United States. As a percentage of US GDP per capita, Mexico had by the start of that era grown its share to roughly 30 percent.

Up until the economic problems that Latin America suffered during the Lost Decade of the 1980s, which included hyperinflation and economic contraction, there was greater hope south of the border. From 1982 to 1986, however, Mexican GDP per capita shrank at an average annual rate of 2.5 percent, while it grew at 2.5 percent in the United States. That is when illegal immigration increased, sparking the famous Reagan Amnesty plan in 1986. GDP per capita in Mexico remains at roughly 29 percent of the US level.

The official White House strategy to create investment, jobs, and hope seems on point, and Guatemala fits the bill. Guatemala has among the best country risk ratings in the region, high monetary reserves, low deficits, and low public debt. Until Guatemala imported higher inflation from the United States in 2022, Guatemala had inflation under control. Guatemala still reports annual inflation lower than that of the United States.

For those who say Guatemala’s low FDI capture rate is due to violence, consider that Guatemala’s homicide rate of 16.6 per 100,000 inhabitants is lower than the rates for Washington, DC, Baltimore, Chicago, and Philadelphia. Guatemala is much safer than the US capital and its surrounding areas.

Democratic backsliding cannot be the reason either. China is a totalitarian regime but still receives plenty of FDI from the United States, approximately 26 percent of the total. FDI in China was 200 times that of Guatemala from 2012 to 2020.

The Guatemalan private sector is ready to partner with the United States to take advantage of Washington’s nearshoring strategy. If FDI were to increase, Guatemala could create the economic opportunities necessary to mitigate illegal immigration.

This would be perfectly in line with the official policy coming out of Washington. If the US government could find a way out of its strategy of lambasting the Guatemalan private sector, it would be in furtherance of its own stated policy.