What Fast-Tracked Venezuela Cooperation Spells for Colombia
Skip to content 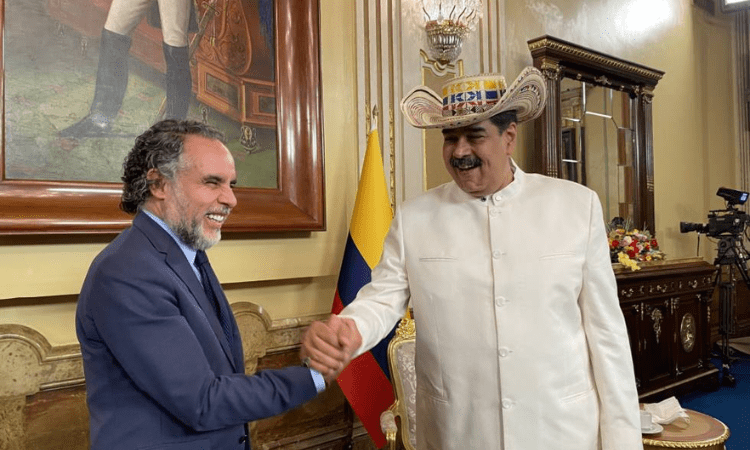 To kick off their cooperation plan, Maduro announced it on a TikTok video wearing a traditional Colombian hat. (Tony Frangie Mawad)

A glaring example is Iran, a country accused of sheltering and financing transnational terrorist groups such as Hezbollah, Hamas, and the Islamic Jihad Organization. Petro invited Iranian Vice President for Parliamentary Affairs Mohammad Hosseini to his inauguration. During his visit, Hosseini met with Colombian government officials and some congressmen—former members of the Revolutionary Armed Forces of Colombia (FARC) guerrillas.

Moreover, Colombia refused to attend an assembly on August 12 of the Organization of the American States, showing solidarity with the Nicaraguan dictatorship. The assembly’s main topic was the condemnation of the Daniel Ortega regime.

During the Iván Duque administration (2018–2022), Colombia recognized Juan Guaidó as Venezuela’s interim president. Duque also refused to appoint an ambassador to Venezuela, which led to the cutoff of bilateral relations.

Newly appointed Ambassador Benedetti and Maduro have already held a meeting in the Miraflores Palace, the Venezuelan presidential residence. To kick off their cooperation plan, Maduro announced it on a TikTok video wearing a traditional Colombian hat, a vueltiao.

Benedetti has two priorities: (1) establishing close cooperation and (2) ceasing relations with Guaidó. The next step is arranging a meeting between Maduro and Petro.

Benedetti has also made public his plan to accelerate natural-gas purchases from Venezuela. Although Energy Minister Irene Vélez said that Colombia should buy gas from Venezuela when reserves end, Benedetti wants to arrange an agreement sooner. “Colombia’s gas reserves will run out in seven years, and we should start buying it from Venezuela now,” Benedetti told Semana Magazine.

In an interview with Bloomberg, Benedetti admitted he expects to give state-run Monómeros back to Maduro. Monómeros is a Colombian-Venezuelan company that produces fertilizers. Its market share in Colombia is 37 percent, where agriculture is a fundamental source of jobs, food, and national development. Monómeros reported revenues of around $13 million in 2021.

When Duque recognized Guaidó as the Venezuelan interim president, part of the state ownership of Monómeros went to Guaidó. The company, however, has struggled with corruption scandals and alleged malfeasance under his leadership. For this reason, Colombia took absolute control of the enterprise in September 2021.

While these scandals have divided the Venezuelan opposition, the Colombian government is taking advantage of them to give a lucrative business to the Venezuelan dictatorship. With the new cooperation plan, Maduro would ensure more dollars for his regime.

In recent years, the Iranian presence in Latin America has expanded. Iran has lent airplanes to the Venezuelan airline Conviasa and its subsidiary Emtrasur. These aircraft fly over the region, landing in Ecuador, Paraguay, Chile, Venezuela, Mexico, and Argentina. This led to the case of the Iranian plane still stuck in Argentina, after it raised suspicions among Latin American leaders.

In Venezuela, Iranian military cooperation has increased. Voice of America reported in March that an Iranian supply of combat drones arrived in Venezuela. According to Israeli Defense Minister Benny Gantz, the delivery included precision-guided missiles that can be attached to the drones. This has raised concerns about the emergence of terrorism in the region.

Diplomatic relations between Iran and Colombia have been frigid since 2000. In 2021, during the Duque administration, Defense Minister Diego Molano said: “Iran and Hezbollah, which support the Venezuelan regime, are our enemies.”

According to an Infobae report, Iran is deepening its criminal activities in the region. The Investigative Project on Terrorism, an NGO focused on terrorism worldwide, has pointed out that Iran has used weak political systems to launder money and finance terrorism. For this reason, Iran and its allies prefer to maintain weak institutions and undermine the rule of law.

Since the onset of Chavismo, Venezuela has allied with Iran, Russia, and likeminded regimes. They have pursued growing military and trade cooperation.

In February, Maduro met in Caracas with Yuri Borísov, then Russian deputy foreign affairs minister. Although Putin had started the invasion of Ukraine, Maduro welcomed him to discuss further military cooperation between the countries.

Maduro told the media: “We have ratified the path of a powerful military cooperation between Russia and Venezuela to defend peace and sovereignty.” Venezuelan and Russian officials have continued to meet ever since to collaborate, especially for military activities.

On August 13–27, Venezuela hosted a series of military exercises with the participation of China, Russia, Belarus, and Iran. For Iván Simonovis, a Venezuelan security expert, these military exercises represent a threat to the entire region. Venezuela has already become a hub in Latin America to fight against the power of the United States and its allies.

Given Venezuela’s proximity to Colombia, its foreign policy has affected Colombia’s safety. Venezuela has hosted organized crime from Colombia, Iran, and Lebanon. Venezuelan officials have provided the infrastructure for money laundering and drug trafficking.

A study by Security and Defence Quarterly reads: “The global scope of this symbiosis between FARC, Hezbollah, and the Venezuelan narco-government is sophisticated and clearly goes beyond any ideology. The ultimate goal is the accumulation of power and money.”

With guerrilla members freely accessing Venezuela and Venezuelan IDs, Colombian officials struggle to capture criminals. In 2020, the US State Department condemned Venezuela as “a permissive environment for FARC, ELN, and Hezbollah’s sympathizers.”

Despite this, Petro invited Maduro to be a guarantor in the upcoming dialogues between the Colombian government and the National Liberation Army (ELN) guerrilla. Venezuela will join ideologically aligned Cuba and Chile to perform this role.

Since Petro took office, Colombia has witnessed to 64 murders from 17 terrorist attacks involving organized crime. In a departure from previous policy, Petro proposed a ceasefire agreement with armed groups located at the border between Colombia and Venezuela. The ELN rejected this accord because they want to be considered political guerrillas and not organized crime.

Petro’s proposal of “absolute peace” is similar to the Mexican government’s failed “hugs, not bullets” policy. This approach, together with Venezuela’s lawlessness, would undermine the military and turn the border into a permanent combat zone.

The developing relations between Maduro and Petro could fuel organized crime in the region. Further, Colombia’s new foreign policy is opening the door for a ballooning influence of Iran—a country accused of financing terrorist groups multiple times.