The Origins of Escalating Violence in Ecuador
Skip to content 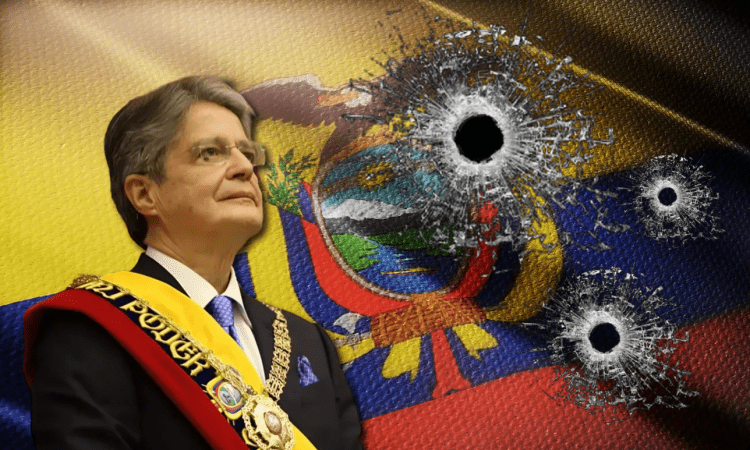 Organized crime has soared in Ecuador since 2020, leading to an annual loss rate of 3 percent of the country’s GDP. (Author)

On October 20, 2022, Ecuadorian President Guillermo Lasso held a meeting with a US Senate delegation led by the Foreign Relations Commission Chairman Robert Menendez. The goal was to enhance economic and trade ties between the two countries, but Lasso also requested support to fight drug trafficking and transnational organized crime.

Organized crime has soared in Ecuador since 2020, leading to an annual loss rate of 3 percent of the country’s GDP. Amid the lack of a sound strategy to combat it, criminal groups have taken advantage of weak institutions and economic instability to rise to power across the country.

The 2022 Rule of Law Index—released by the independent, nonprofit World Justice Project—ranked Ecuador 93rd out of 140 countries. Suffering similar insurgencies, neighboring countries Peru and Colombia are ranked 90th and 91st, respectively. The worst-rated variables in Ecuador’s score were corruption (0.41/1.00) and criminal justice (0.34). Only 3.5 out of 10 citizens have a formal job, and the poverty rate is 25 percent.

Stagnant since 2017, the Ecuadorian economy has been unable to rebound after the COVID-19 pandemic. As murders, thefts, and extortion become more common, citizens feel forced to change their lifestyles and reduce their outside activities, further stifling economic dynamism.

Has Insecurity and Violence Increased?

If this trend continues, the murder rate could surpass 24 per 100,000 inhabitants by the end of the year. This could bring Ecuador close to Colombia’s and Mexico’s rates of 26.8 and 26, respectively, in 2021.

The most dangerous zone in Ecuador is the northern coast in the provinces of Esmeraldas, Manabí, and Guayas. In Manabí, one violent death occurs every 22 hours on average.

Assaults have also become more frequent. According to the Attorney General’s Office, the average of robberies per month in 2022 is 6,121, compared to 5,210 in 2021. A CID Gallup survey released in May reported that Ecuador has the third highest theft of Latin American countries.

What Is Fueling Crime?

The wave of violence started when José Luis Zambrano, alias “Rasquiña,” leader of the “Choneros” gang, was murdered in December 2020. What followed was a series of confrontations between gang members in jail. Nine prison massacres left a toll of 398 inmate deaths in two years.

According to police estimates, around 20 criminal groups operate in Ecuador. Six of them have a presence nationwide:

The Tiguerones, according to official reports, have grown to the point that they are transitioning into a cartel. The gang has 1,500 members in jails and 3,000–4,000 members on Esmeraldas streets, with an ongoing recruiting mechanism in place.

What Is the Role of Drug Trafficking?

Over a decade ago, Francisco Huerta—a career politician who contributed to the investigation of the death of the Colombian FARC guerrilla ringleader Raúl Reyes in the north of Ecuador—forewarned that Ecuador could become a narcostate. He pointed out that drug trafficking organizations had penetrated the police and the army.

While there is not clear evidence to prove such infiltration, Lasso acknowledges that skyrocketing violence is due to the confrontation among criminal groups in order to control more territory and to gain political influence. Gangs are defying the Lasso administration, as it attained an all-time record of drug confiscations last year: 210 tons.

According to the UN Office on Drugs and Crime, 6.5 percent of worldwide cocaine confiscation in 2020 occurred in Ecuador. The country’s largest city, Guayaquil, is home to one of the largest ports used to export illicit drugs.

Since May 2021, Lasso has declared a state of emergency six times in Guayaquil and nearby areas to increase police and military control. Rather than intimidating the gangs, these have increased their attacks, including murders of prosecutors, judges, and public servants.

Ecuador is not a major drug producer, but it is located between Peru and Colombia, which are some of the world's biggest producers. Its location, therefore, makes Ecuador attractive to transnational organized crime.

This is the case for the Albanian criminal group Kompania Bello, which controls most drug shipments to Europe. In September 2020, Europol reported that the ringleader of this organization, who was jailed in Ecuador, “arranged huge shipments of cocaine to the major ports of Europe and, with the help of accomplices based in Italy, the Netherlands, and Albania, organized distribution throughout Europe.”

According to The Telegraph, this group recruits minors in Ecuador to be hitmen in Europe. Juan, a 16-year-old, confessed he killed 45 people over four years. He said: “The kids know if they refuse, they’ll be killed. They have no choice.”

How Is Insecurity Affecting Businesses

According to a 2021 report by the International Labor Organization, insecurity is a growing concern in the country’s productive sector. In addition to losses caused by assaults and decreased consumption, businesses must now deal with organized crime. Criminal groups demand to be paid for a “vaccine”—the term used by gangs in Ecuador referring to the extortive collection of money in exchange for protection. The amounts of money range between $40 and $5,000 per month, depending on the type and size of the business.

In rural and peripheral zones where lawlessness reigns, “vaccines” are also required. They demand $2 per week from poor households and $5 from street vendors.

Whether members of criminal groups or not, extortionists introduce themselves as members of Lobos or Choneros and demand money. They threaten their victims with shelling their stores or kidnapping or murdering a relative if they do not pay the weekly or monthly payment.

Is There a Way Out?

In 2023, Ecuadorians will elect local authorities in the midst of the worst security crisis in their history. Criminal groups have allegedly exploited this event to establish their own people as candidates all around the country and make alliances with different political parties.

Luis Verdesoto, currently in charge of the national anticorruption policy, warned, “Ecuador has, at the moment, an elevated risk of drug traffickers infiltrating politics.” Since criminal groups are increasing both their regional control and the competition among them, Verdesoto explains, they need to gain more political power to overcome opposing gangs.

While the government continues to take steps that are failing to rein in drug trafficking and insecurity, criminal groups are growing. Their violent battles to occupy more territory and gain more power, amid rising unemployment and poverty, are condemning the country to a hopeless conflict that jeopardizes the state’s stability at its core.