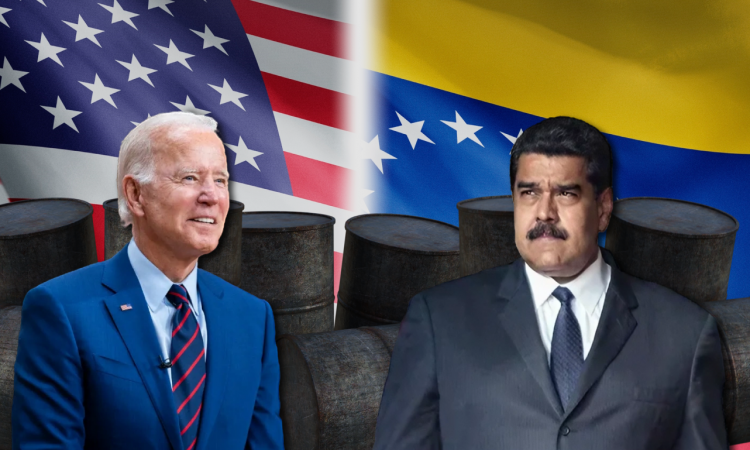 US officials have granted short-term licenses to Chevron to operate in Venezuela for specific purposes. (Sebastián Díaz)

Once Chavismo and the Venezuelan opposition reached an initial agreement on November 26, 2022, the Joe Biden administration rushed to lend a hand to the dictatorship by easing oil-related sanctions. Biden seeks to secure the oil supply the United States needs, even if this would enable Venezuela’s return to international markets.

As of November 26, US officials have granted short-term licenses to Chevron to operate in Venezuela for specific purposes. However, US officials have pledged to ease sanctions incrementally if dictator Nicolás Maduro commits to democratic elections.

In a press conference on November 30, Maduro said the US government gesture was a “step in the right direction” but not enough. The narcodictator apparently thinks he has leverage to extract more concessions from the Biden administration in exchange for access to Venezuelan resources.

Oxygen for the Dictatorship

The licenses from the Office of Foreign Assets Control of the Treasury Department allow Chevron to extract oil for six months through joint ventures in Venezuela, which cooperate with Venezuelan oil state company PDVSA. The licenses also allow the joint ventures to repair infrastructure and purchase supplies from the United States.

The licenses impede selling the oil obtained through Chevron’s operation to any country other than the United States. In return for the joint venture, Chevron will pay dividends to PDVSA in the form of reduced debt with the US partner. On paper at least, the intention is for Chevron to not pay any taxes or royalties to the dictatorship.

Chevron is not technically subject to Venezuelan taxation. However, not only is PDVSA working with Chevron. There are other domestic companies involved, and they are legally obliged to pay taxes to the Chavista regime on every barrel extracted.

The sought after impediment simply does not stop the Venezuelan regime profiting from the deal. In fact, Maduro has publicly stated it is a win-win for all the parties involved.

Likewise Francisco Rodríguez, an economist and professor at the University of Denver, says the Venezuelan regime will without doubt receive income from Chevron’s operations despite the US restriction. In addition to collecting taxes from the local companies associated with Chevron, fewer oil-related sanctions will enable PDVSA to increase its production and revenues over time.

Currently, PDVSA is producing around 680,000 barrels per day (bpd). In the 1990s—before Chavismo gained power and when the company was operating at full capacity—daily production was 3,3 million barrels. There is immense untapped capacity, and Chevron estimates production of 50,000 bpd during the six-month licenses. If renewed, Chevron’s oil production will likely surpass 200,000 bpd in two years.

In October 2022, Washington ingratiated itself with the Venezuelan dictatorship by releasing Cilia Flores’s two nephews. Both were serving 18-year prison sentences due for drug trafficking, after conviction in a New York court. Flores is Maduro’s wife. In return, the dictatorship released seven US prisoners held in Venezuela.

Although the Biden administration has resumed negotiations with Maduro—who is wanted for narcotrafficking and terrorism by the US State Department—it has not recognized him as Venezuela’s legitimate president, yet. The US Justice Department is also offering a $15 million reward for information that leads to his capture.

Pedro Urruchurtu, the international-affairs coordinator of Venezuelan opposition party Vente, told the Impunity Observer there are still no credible threats that would bring the regime to cave. For him, negotiations in Mexico between the regime and the opposition Democratic Unity Platform (DUP) are a façade.

Urruchurtu contends the only way for the regime to hold credible negotiations is to have a legitimate opposition leader who has citizen support. The DUP has struggled with credibility since withdrawing Juan Guaidó as its interim president. The initiative with Guaidó failed to garner sufficient momentum.

Although the Biden regime’s messages are contradictory, one can read between the lines. The conclusion is that no matter how brutal and criminal a regime is, as long as it serves the administration’s objectives—such as Venezuela with its oil supply—the United States is willing to negotiate.

SFRC Chairman Menendez statement in reaction to the resumption of talks between the Maduro regime & the Venezuelan opposition, & the signing of a humanitarian agreement to be implemented by the United Nations: pic.twitter.com/4UByZLzjcB

Let Us Not Be Fooled, The Motive Is Clear

Since Vladimir Putin’s invasion of Ukraine and the subsequent US prohibition on Russian oil and gas imports, US officials have, one after the other, been visiting Caracas. Claims that the intent is to restore Venezuelan democracy ring hollow. The overarching motive appears to be the reincorporation of Venezuela as a cheap oil supplier.

As a result of Biden’s order to use the strategic oil reserves in March 2022, they remain at their lowest level in 38 years with only 372 million barrels. The Energy Department reported refilling will start in February 2023, but the allocated budget of $70 per barrel does not meet current oil prices, which are currently around $80.

Domestically, the Biden administration has undermined oil producers, in an attempt to keep party donors and environmentalists happy. However, neglecting US producers plays right into the hands of shameless human-rights violators such as Venezuela.

Biden’s arrival to the White House was celebrated in Caracas. We can now see why. Maduro’s dictatorial regime went from being isolated by the international community under the Donald Trump administration to gaining legitimacy and power thanks to the contradictory policies of the Democratic Party administration and its European allies.