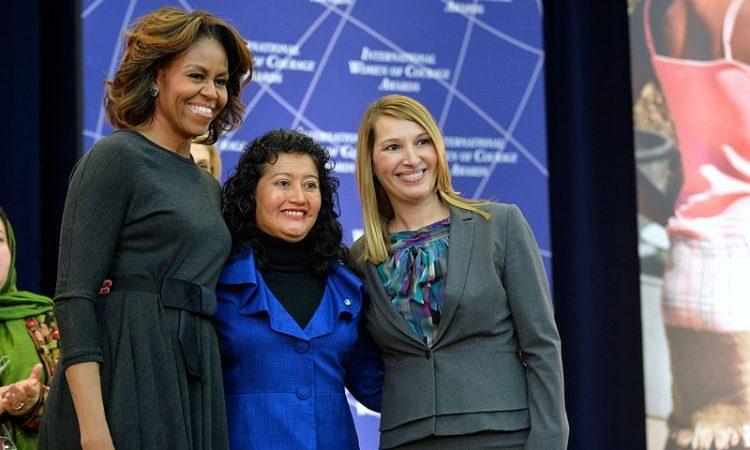 The violent Marxists of Guatemala didn't disappear in 1996. Now they align with the US State Department. (Wikimedia)

This is a statement on behalf of Liga Pro Patria.

The United States, under President Obama, is helping radical anti-Americans take power in our country.

Since 2010, the US embassy has been openly supporting the activities of terrorists whose predecessors tried and failed to seize power in Guatemala before the peace accords of 1996.

Under the rule of Attorney General Claudia Paz y Paz, who took office in December 2010, the Ministry of Justice became an arm of the violent and criminal guerrilla left. As minister, Paz y Paz encouraged leftist militias by shielding them from criminal prosecution and by imposing rules that supported their illegal activities.

At the same time, the Justice Ministry prosecuted law-enforcement officials who tried to restrain the criminal activities of groups protected by the attorney general.

On August 2, 2012, Paz y Paz herself paid a visit to the district attorney’s office in Huehuetenango, several hours distant from the capital, to confront an assistant district attorney over a case that the local prosecutor was handling.

The prosecutor, Gilda Aguilar, had requested arrest warrants to be filed against 10 individuals involved in a criminal uprising. The individuals were associated with the Committee of United Campesinos or CUC, an arm of the old insurgent group Guerrilla Army of the Poor (EGP).

Through witness testimony, the prosecutor had discovered that the militants were systematically coercing local residents to take part in the group’s criminal activities.

But Attorney General Paz y Paz ordered the prosecutor to seek the cancellation of the arrest warrants. Prosecutor Aguilar refused to obey Paz y Paz, who at once removed her from the case.

On the night of August 22, 2012, prosecutor Aguilar’s car was blockaded on a mountain road and ambushed by armed assailants. A hail of bullets was fired into the car.

Aguilar fled for her life as her security guard returned fire. The guard was gravely wounded. The prosecutor, miraculously untouched by bullets, took refuge in the tall grass and shivered for an hour in the freezing temperature before she dared use her phone to call for a rescue.

The following day, Justice Ministry officials called the shooting an attempted robbery and ordered the prosecutor not to name the CUC militia members as suspects.

More than a year later, having resigned from the Justice Ministry, Gilda Aguilar was the first to conduct a proper investigation of the crime in which she had been the victim.

Through eyewitness testimony, Aguilar established that the leader of the CUC, Daniel Pascual, had hired a gang lord to assassinate her.

In full awareness of what Paz y Paz and her ministry had done, the US ambassador in Guatemala gave political cover to the attorney general.

In February 2014, when Paz y Paz’s reappointment was being debated, US Ambassador Arnold Chacon took to the airwaves on the attorney general’s behalf. He declared: “My government is proud to have a partner like Dr. Paz y Paz.”

Paz y Paz’s reappointment failed. But the keystone of Paz y Paz’s program remains, and the United States is avidly supporting it.

That keystone is a desperate effort to obtain a conviction in Guatemala’s genocide trial.

The chief defendant happens to be retired general and head of state Efraín Ríos Montt. But what matters to the prosecutors is their ability to rewrite history as well as the law. If they can convict and sentence their former enemies on this bogus charge, they can overturn the country’s legal and constitutional structure.

In charge of the trial was a Paz y Paz partisan, Judge Yassmin Barrios. The courtroom spectacle reminded observers of show-trials under the Nazis and Soviets.

At the height of the trial, the US embassy issued a statement: “We exhort all Guatemalans to respect the legitimacy and integrity of this process.”

The vast number of Guatemalans, who knew no genocide had occurred, could only see the embassy’s exhortation as a sign that US power was behind the radical left.

In May 2013, the tribunal of judges handed down a guilty verdict against Ríos Montt and imposed an 80-year jail sentence on the 87-year-old defendant. A remarkable video shows Judge Barrios as not quite the model of judicial restraint, giving a fascist-style salute to a crowd of courtroom spectators who cheered the verdict.

Shortly thereafter, Guatemala’s highest authority, the Constitutional Court, set aside the verdict for further examination on grounds that Judge Barrios had violated the defendant’s constitutional rights.

But on March 4, 2014 — in a Washington, DC, ceremony presided over by First Lady Michelle Obama — the US State Department bestowed on Judge Barrios one of its “International Women of Courage” awards for 2014.

The State Department citation said of Judge Barrios: “By initiating the judicial process against the former dictator, Barrios gave a voice to thousands of Ixil-Mayan victims [and] provided an important legal precedent for genocide cases worldwide” [emphasis ours].

Early in 2015, by order of the Constitutional Court, the trial resumed under a new judge. In a brief and ominous statement, the US embassy all but demanded a guilty verdict. “The unfolding of this case will reflect the state of the rule of law in Guatemala,” the statement concluded.

If the Guatemalan left, supported by the United States and the United Nations, obtains a conviction in the genocide trial, it will have set a precedent for rewriting the law, and for canceling defendants’ rights under the law.

In the past, Guatemala and her people were used by the United States as a proving ground for experiments that US authorities would never have conducted in their own territory. Today, US officials say those times are long gone.

But yes, Roberta, we have imperialism in the present day, and the new imperialism goes far beyond the old.

The Obama administration is playing with the constitutional order of Guatemala — as it would like to do, but cannot as easily do, in the United States.

If today’s Yankee experiment succeeds, it will spell the destruction of Guatemala’s constitutional republic.

Steve Hetch is director of the Liga Pro Patria of Guatemala, a non-profit association which, in line with its founding charter, has participated in public affairs to give information about rule-of-law issues and to promote the rule of law in Guatemala.