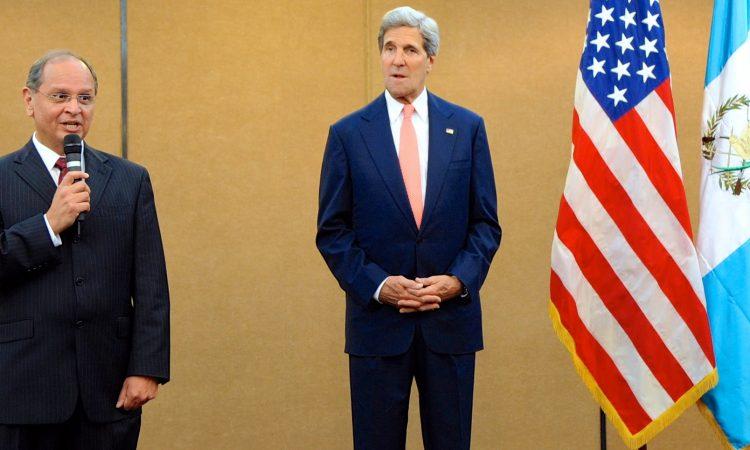 A few weeks after the attempted assassination of Gilda Aguilar in 2012, a co-author of these articles, Steve Hecht, was invited to meet with Arnold Chacon, the US ambassador to Guatemala. Hecht went to the meeting alongside Professor Armando De la Torre, a dean at Francisco Marroquín University and a columnist for Guatemala’s El Periódico.

In advance, Chacon had made clear that De la Torre and Hecht — both US citizens — must not quote anything they heard from him. They, for their part, had come not to write but to brief the ambassador on wrongdoings at the Justice Ministry, on injuries that the attorney general, Claudia Paz y Paz, was doing to the rule of law.

As it happens, Chacon and his embassy were quite outspoken on the subject of Paz y Paz. A short time before seeing De la Torre and Hecht, the ambassador had summoned Guatemalan activist Ricardo Méndez-Ruiz to a sit-down.

Ricardo Méndez-Ruiz is the son of a retired army colonel who served as Ríos Montt’s minister of the interior. An implacable critic of Paz y Paz, he is regularly vilified by guerrilla partisans as someone in the lowest reaches of humanity — “a person with close ties to the Guatemalan military.”

It also happens that, while his father was serving with Ríos Montt, the younger Méndez-Ruiz — while studying veterinary medicine — was kidnapped by the EGP, the same branch of the guerrilla movement for which Paz y Paz’s relatives were working. He was held prisoner by guerrilla factions for two months, an experience that marked him forever.

The ambassador wanted to take issue with a column that Méndez-Ruiz had just published in the daily El Periódico. The piece had opened with this assertion: “Ambassador Arnold Chacon has betrayed the people of the United States by collaborating with terrorists in Guatemala and with people who are known to be sympathizing with them.”

That last phrase was a direct reference to Paz y Paz. The column had not named her, but the ambassador knew where it was pointing. As Méndez-Ruiz later told these writers:

“The ambassador expressed to me that Paz y Paz enjoys the broad support of Secretary of State Hillary Clinton — to such an extent that he, Chacon, is one of the very few ambassadors that Secretary Clinton immediately receives when he visits Washington, and this is precisely due to the relationship with Claudia Paz y Paz.”

Chacon’s defense of Paz y Paz was pure public-relations reasoning — while De la Torre and Hecht were coming to Chacon with the kind of news that’s awful for PR.

Paz y Paz had begun disciplinary proceedings against prosecutor Gilda Aguilar for attempting to indict 10 individuals connected with the actions of an outlaw militia. But Justice Ministry officials were also officially downplaying the attempted murder of Aguilar, calling it a robbery gone bad.

The ambassador’s visitors also briefed him on improper instructions Paz y Paz had given inside her own ministry.

Regarding the important matter of land invasions or squatting, the attorney general had instructed prosecutors as to the “time that should be given to the occupiers to evacuate, which should be reasonable in conformity with the circumstances.…” (Instruction 7-2011). That order contravened the penal code, which stipulates “immediate evacuation.”

Nor was Paz y Paz content to rewrite the law for prosecutors. She had also tried to instruct judges. Some three months earlier — July 2, 2012 — Judge Silvia de León of the capital district had read into the court record her description of a judges’ meeting at which Paz y Paz made an unannounced appearance.

The attorney general’s very presence at the meeting had been highly irregular, perhaps illegal. According to De León, the attorney general told the judges that wealthy people involved in proceedings were already well represented by high-priced lawyers who saw to their cases.

Therefore, Paz y Paz said, judges did not need to concern themselves with the rights of wealthy people — many of whom were dispossessed landowners.

De León’s act in putting her statement on record was an expression of alarm. The attorney general’s purpose had been to compromise judicial independence, not uphold it.

The US ambassador greeted all this information from his visitors with visible reluctance. He showed no inclination to consider it seriously.

Some months later, however, the ambassador came fully to life when the courtroom phase of the genocide trial began. He made no secret of the fact that the United States favored a conviction.

Adding to that gesture, the embassy issued a statement in Spanish only — making it invisible to the US public and all too visible to Guatemalans, many of whom disliked it.

After praising the judicial reforms of Paz y Paz’s ministry, the US statement said: “We exhort all Guatemalans to respect the legitimacy and integrity of this process.”

On May 10, Ríos Montt was declared guilty — while his co-defendant and former intelligence chief, General José Mauricio Rodríguez Sánchez, was acquitted on the same charges. Two days later, a Sunday, another Spanish-only release from the US embassy rhapsodized the verdict: “Now, the Guatemalan people are given the opportunity to go forward to a genuine reconciliation.”

How Guatemalans would “go forward to a genuine reconciliation,” with what many understood to be a false verdict backed by guerrilla and US pressure, the embassy did not explain.

Just eight days after that statement, the verdict was suspended by Guatemala’s highest judicial body, the Constitutional Court.

From around the world, partisans of the guerrilla faction cried foul and claimed an illicit ruling based on technicalities. But the Constitutional Court had not shut the process down; it said it would review the proceedings and make a judgment based on its review.

The reason for the high court’s intervention was this. During the trial, Barrios had clashed with Ríos Montt’s attorney and ejected him from the courtroom. At the same time, the presiding judge was impatient to issue her verdict and did not want to lose time while Ríos Montt chose another lawyer.

In a forcible upending of judicial procedure, the judge ordered General Rodríguez’s two attorneys to represent Ríos Montt as well. Those attorneys complied with Barrios’s order, even though they understood it to be against everything they knew about the law.

Throughout the trial, advocates for the prosecution, including the US embassy, had argued that the proceeding must respect the rights of the victims above all else. Barrios’s suppression of the defendant’s rights neatly exposed that fallacy.

In a criminal case, the respective rights of the parties cannot be served until the crime itself has been specified. That’s especially true regarding genocide.

What exactly was the crime? What was the nature of the war in which it had supposedly been committed? The issue at hand was beyond murder or rape or other physical abuse. If true, it was the intended destruction of a people for the simple fact of being who they were.

If the genocide charge was to be proved, a deeper inquiry had to unfold in the court. But Barrios, it seems, needed no further proof of the allegation. She gave no room for the defense to inquire.

The judge’s act of imposing lawyers on Ríos Montt was a rush to judgment — a suppression of lawful procedure.

That didn’t trouble the US State Department, which invited Judge Barrios to Washington and conferred on her one of its “International Women of Courage” awards. The presenter of the award was no less than First Lady Michelle Obama.

In its citation of Barrios, the State Department announced that she was being awarded precisely for her work on the genocide trial. The fact that the trial had been halted, and was under judicial review, did not keep the United States from declaring that Barrios had “provided an important legal precedent for genocide cases worldwide.”

Many Guatemalans thought otherwise — including the country’s bar association. They announced a few weeks after the State Department award that it was sanctioning the judge with a one-year suspension for her instruction to General Rodríguez’s lawyers.

That action prompted a vehement retort — again in Spanish only — from the US embassy, which called the sanction “a threat to the independence of all judges and lawyers in Guatemala who fight against impunity and corruption.”

With its heavy clout, the United States was telling the bar association and all of Guatemala: we don’t really care about the rule of law. Your legal and constitutional explanations have no meaning to us. Ríos Montt is guilty. Just give him a trial and then hang him.

Barrios’s suspension was cancelled by the guild of professional associations, with US pressure certainly a factor. And the constitutional court ruled for a new trial on the genocide charge under a different judge. In January 2015, the second trial began.

Meanwhile, however, the United States had lost a political battle even dearer to its heart. Claudia Paz y Paz would not continue in office; she had failed in her bid to succeed herself as attorney general.

To that setback, the international pro-guerrilla party, led by the United States, would give its most vehement reaction of all.