Back in the USSR: UN Commission Sends Defense Attorney to Guatemalan Gulag
Skip to content 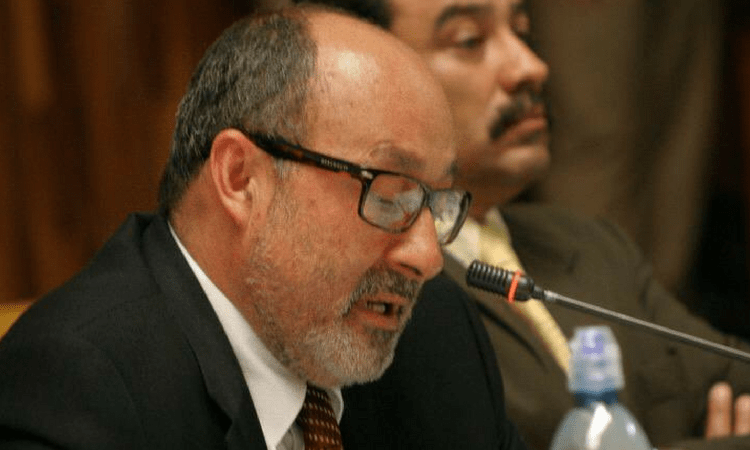 “I don’t feel bad about being here; I feel proud that I am here because of my principles,” says attorney Moisés Galindo. (Ricardo Mendez Ruiz)

In an interview at the prison at the Mariscal-Zavala military base—where he is now confined, thanks to the United Nations’ so-called anti-corruption commission or CICIG—Guatemalan attorney Moisés Galindo revealed the CICIG’s campaign of personal destruction waged against him.

In early October 2017, the CICIG—working through Guatemala’s Ministry of Justice—ordered Galindo’s “provisional imprisonment,” a concept that bona fide legal authorities insist does not occur in Guatemalan jurisprudence. Of his confinement, Galindo said: “I don’t feel bad about being here; I feel proud that I am here because of my principles.”

Part of the punishment the CICIG is inflicting on Galindo is a Soviet-style expropriation. Galindo said: “They illegally attempt to take all my assets as part of their repression.… They have tried to implement a 21st-century socialist model through the courts.”

Galindo said his actual offense has been to argue against the CICIG’s program for Guatemala, and against its accretions of power. The CICIG and its commissioner, he said, “have intimidated judges, businesspeople, politicians, and soldiers. I am here because they want to intimidate defense lawyers.… It’s an honor that they believe I am an important part of the legal team that is exposing them as a farce.”

In persecuting Galindo, the CICIG utilized a tactic that is inconceivable in a civilized legal system. It pushed one of the attorney’s own clients to seek a meeting with him and then made use of the resulting attorney-client communications as a means to incriminate him. In a rare 2012 case, Spain’s supreme judicial authority did not hesitate to defrock a well-known judge for pulling this kind of maneuver:

“Neither the Justice Ministry nor the CICIG ever requested—at least as far as we know—a judge’s order to record the conversation between my client and me. Of course, had they requested such a thing and had the judge accepted, it would have been disastrous for them all,” Galindo said. “In any case, it’s obvious my client acted as she did because the CICIG put pressure on her to do so.”

“The state cannot fight crime if it is criminal,” Galindo added. “First they arrest, then they investigate… The judge is so submissive that she claims the attorney-client privilege applies only to the client, not the lawyer. Article 5 of the Bar Association’s Code of Ethics contradicts her.”

When Galindo’s client appeared in court, shepherded there by a CICIG prosecutor to offer evidence against her own attorney, the judge signed off on that patently illegal maneuver and ordered Galindo’s arrest.

“The court ordered my arrest based on illegal proof,” Galindo said. “The judge is a political judge at the CICIG’s service. My case shows the degradation of the administration of justice. The CICIG has coopted the judges, and the Justice Ministry has become a political police force.”

Following Galindo’s arrest, the Soviet-style propaganda machinery of the CICIG went into action.

“The CICIG manages itself with a media strategy. When they arrested me, [the CICIG and the justice minister] had the press waiting.” The purpose was to shame Galindo in front of the whole country. It was another move disallowed by Guatemala’s law and constitution.

“The first priority [of the criminal-justice system] is to hold the first hearing, which must be done within 24 hours [of the arrest] according to the Constitution. Judicial procedures are very often interrupted because of the need to hold a first hearing … In my case, it was the reverse. It took 57 days for the judge to finish my first hearing and bind me over for trial. They used the notion of provisional prison, which doesn’t exist. Once bound over for trial, preventive detention exists, but holding someone for more than 24 hours without binding him over for trial is illegal.”

“Provisional prison” is the best that a corrupt system—the one that’s run by the CICIG and administered by Guatemala’s Justice Ministry—can manage against Galindo.

“Supposing they did not commit all the violations against me that they did, they still wouldn’t be able to prove the charges against me. They claim I received a vehicle that had been obtained as payment by one prisoner to another for preferential treatment and that I had known about it. They cannot prove that because, among other things, one of those prisoners is dead. Furthermore, there is documentation that the supposed preferential treatment was done for medical reasons.”

“The truth is, they have no proof of any kind,” Galindo added. “Apparently they tried to make a sound-recording, the only purported evidence in this case. In spite of the constitutional obligation to present it, we have not seen anything. Even in the most extreme case—if they brought a recording in perfect Dolby, with everything coming out of my mouth exactly as they wished—which flatly did not happen, the whole thing would have to be thrown out of court, because such evidence would be illegal and therefore inadmissible.”

Unfortunately, the CICIG’s judicial order can keep Galindo incarcerated indefinitely, without a verdict or any proof. Other prisoners in similar situations have been at Mariscal-Zavala for five years or more while the court system fails to give them their trials, or while the CICIG is still “collecting evidence.” In some cases, the maximum sentences for the offenses these prisoners have supposedly committed already exceeds the amount of time they have spent in jail.

Galindo is the political prisoner of an amoral, totalitarian movement bent of taking full power in Guatemala. The same movement, with the same strategy and tactics, is in many countries, and those countries could benefit from studying Guatemala’s plight today. The only clear way to get justice for Galindo, and indeed for the society in which he lives, is to recognize the shortcomings of the CICIG and then strip away its ill-gotten powers.

For a more in-depth investigation of the Galindo case, see Part Five of the recently published series, “The CICIG and the Rule of Law.”