Why Nationalism Beats Globalism for Guatemala
Skip to content 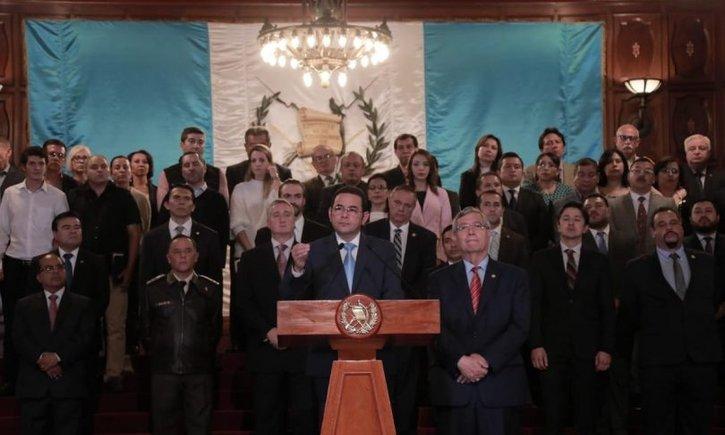 There is a lesson for all UN member nations in the dispute between United Nations Secretary-General Antonio Guterres and Guatemala: it can happen to you. The corrupt global organization acts in a lawless manner, and if you give it an inch it will take a mile.

As globalists characterize President Donald Trump’s nationalism as tribal and racist, the dispute with Guatemala is a perfect example of why Trump is correct. He favors political independence and liberty. The alternative is an anti-democratic international order.

The CICIG was created by agreement between the United Nations and Guatemala in 2007. Its mission was to assist the Justice Ministry in identifying and dismantling clandestine state security groups beyond the reach of the law.

The CICIG became exactly what it was created to eliminate. It protected violent groups descended from Guatemala’s internal armed conflict (1960-1996) and persecuted legitimate authorities. Guatemala’s border areas with Mexico now have no state presence, which permits the free flow of illegal migrants and drugs to Mexico and the United States.

The peculiar CICIG agreement states it is not a UN organ. It reports to nobody and has diplomatic immunity, a dangerous combination for any institution. All three CICIG commissioners have abused their powers to co-opt Guatemala’s judiciary and Justice Ministry. Their objective has been a radical collectivist, globalist dictatorship in Guatemala, à la Venezuela and Nicaragua.

The nonprofit Association Liga Pro Patria of Guatemala, in a January 7 press release, gave a list of CICIG crimes. “Assault, homicide, assassination, kidnappings, extortion, falsification of public documents, coercion, threats, constitutional violations, use of false witnesses, abuse of authority, and violation of due process, among many others.” The Liga and three other civic groups published a report in 2018 unmasking the CICIG.

In August 2017, Morales presented Guterres with a list of CICIG violations and expelled CICIG commissioner Iván Velásquez from the country as persona non grata. The UN-Guatemala agreement made the commissioner subject to the Vienna Convention on Diplomatic Relations and thereby subject to expulsion by the host country’s executive.

On September 4, 2018, Guatemala formally notified Guterres that Velásquez was unacceptable and would not be allowed to return to Guatemala. The note asked the secretary general to name a new commissioner.

How Velásquez became commissioner in the first place demands an explanation. Judicial Watch, a DC-based legal watchdog, reported, “As a lawyer in Colombia, Velásquez aligned with the FARC, the violent Marxist guerrilla.”

Guterres reiterated his support for Velásquez as CICIG commissioner, who continued to operate from outside Guatemala—in violation of the agreement and international law.

Guterres refused to name a new commissioner for fear of it backfiring on the United Nations. The appointee would have had to either accept CICIG crimes and become an accomplice or denounce them and end the CICIG. The globalist objective of taking complete power would end without the CICIG.

The standoff continued until January 5, when a CICIG operative banned from Guatemala arrived at the airport. Immigration officials denied him entry, as their duty required.

Apparently, the crimes the CC and the attorney general committed were to test the president for Velásquez’s return to Guatemala. The CC had illegally authorized him to return, but then the president surprised them and canceled the CICIG altogether.

Guterres’s rejection of Morales’s CICIG termination was an invitation to his and Velasquez’s CC allies to overturn the order and reinstate the CICIG. On cue, on January 9, the CC issued a provisional injunction suspending the presidential order to end the agreement with the UN regarding the CICIG.

The president of the CC dissented, noting the court has no jurisdiction over a disagreement between the state and the UN and no authority over executive foreign-relations decisions. She also noted that only a challenge of unconstitutionality can be used to overturn a presidential order, not an injunction.

Constitutional law expert Jose Luis Gonzalez Dubon says, “The CC ruling is manifestly illegal and the four magistrates who signed it have committed crimes for which they should be judged.”

Well-established CICIG criminality reveals the partisan nature and lack of ethical principles of those who pretend to have a legal basis for its continuation. No sovereign nation should be forced to undergo the destruction of its public order for an agreement the United Nations has violated. International law and the Guatemalan constitution fully support Morales’s actions.

Fortunately, at least some US elected officials understand what this confrontation means and want to forge a healthy alliance with Guatemala. Senator Roger Wicker (R-MS) said “The decision on when [CICIG] leaves is the Government of Guatemala’s alone.” Senator Mike Lee (R-UT) added “A nation’s sovereignty is the core of its freedom. Guatemala has every right to … defend violations of sovereignty and abuses committed by the [CICIG].”

Every nation has a right to sovereignty! Guatemala has a right to decide if it wants the UN to interfere in its internal affairs. CICIG was never supposed to last all these years. Additionally, the United States has funded CICIG for far too long. Time to stop that too! ?? ??

All member nations of the United Nations should act against Guterres’s blatant disregard for international law and Guatemalan sovereignty. UN members should take notice of his political agenda of imposing radical collectivist criminal globalists on a member state.

The globalist argument of equating free trade with central global control is a ruse for collectivism. Free, independent countries can engage in free trade more efficiently and with greater benefits for their citizens.

Guterres is mistaken. Trump and Morales are correct. Sovereignty and nationalism are essential for liberty and independence.