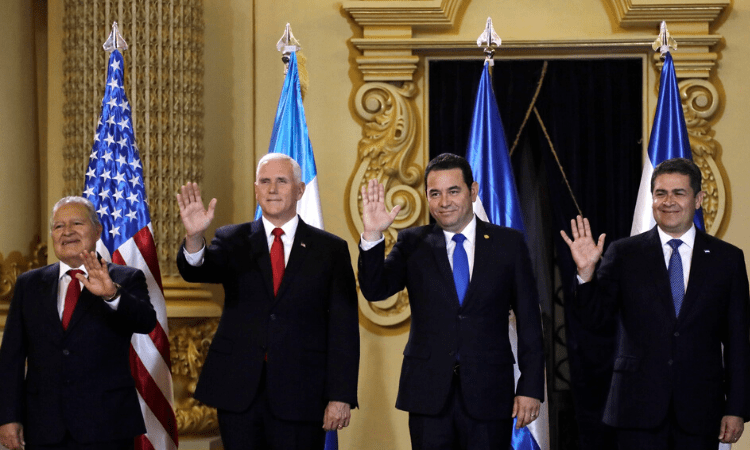 Mass migration is the most salient reflection of political and legal failure. (Presidencia El Salvador)

An influx of 1 million people is enough to put any country’s immigration system under severe stress. That is how many migrants have been apprehended at the US southern border over the past 12 months. Building a bigger wall will not be enough; US aid can and should help the nations of origin and transit to stem the flow.

Given the extent of this crisis, the Trump administration has naturally worked with the Central American nations where most of the migrants come from or travel through. Asylum agreements struck with Guatemala, El Salvador, and Honduras—known as the Northern Triangle countries—are a major first step to be commended. These deals will reduce the number of migrants by eliminating abuse of the asylum process by economic refugees. Cooperation must now proceed to create the conditions so that fewer Central Americans need to migrate.

With President Donald Trump restoring aid to the region, Northern Triangle countries should propose programs that foster the rule of law and attract investment. Now is the time to reorient US development aid away from collectivist organizations that have historically fueled criminality. Precious tax dollars should go to law-abiding individuals and entrepreneurs in Central America.

In the first half of 2019, US and Mexican officials apprehended around 534,000 and 106,000 migrants, respectively. This was 40 percent higher than during the same period in 2018. Minors arriving in the southern US border rose by 55 percent. As long as the region remains mired in poverty, violence, and legal instability, the problem will only grow.

According to the UN Homicide Global Study, El Salvador, Honduras, and Guatemala registered 62, 42, and 17 homicides per 100,000 inhabitants in 2017. The average world rate at the time was six. At least 60 percent of the population in the three countries live below the poverty line. Income per capita in the United States is 25 times higher than in Honduras, which explains why so many take chances and face a life-threatening journey.

No one leaves everything behind without feeling hopeless about his country’s future. Authorities in the Northern Triangle have unfortunately demonstrated over the years an inability to create trustworthy institutions, provide public services, and uphold the law. On a World Bank scale of one to seven that measures government waste, El Salvador scored 3.23, Honduras 2.28, and Guatemala 2.26. Similarly, the 2018 Index of Corruption Perception ranks El Salvador 105, Honduras 132, and Guatemala 144 out of 180 countries.

Mass migration is the most salient reflection of political and legal failure. Citizens are constantly voting with their feet against violence and for more economic opportunities. Governments across the Americas should take note.

Trump Cannot Do It Alone

The United States cannot expect to solve all the problems in the Northern Triangle. She should rely on local governments to identify the most pressing needs. Nevertheless, there are clear areas of concern to all parties: migration, security, and jobs.

In October, Trump signed initial “safe third country” agreements with Guatemala, El Salvador, and Honduras. This means that refugees must first seek asylum in the countries they traveled through rather than in the United States. However, this requires well-functioning migration systems in the Northern Triangle. Currently, this is not the case. The first target should be to provide training, infrastructure, and capacity development to process migrants.

It is worth stressing that most of those arriving in the US southern border are not refugees but rather economic migrants whose lives are not in immediate danger, as the former acting Homeland Security Secretary Kevin A. McAleenan explained in July.

Therefore, addressing the lack of job opportunities is an important part of the equation. The Trump administration has agreed to expand temporary visas for Guatemalan agricultural and farm workers for this reason. However, as David Bier of the Cato Institute has noted, that is not enough, since US firms prefer to hire Mexicans who are closer to home. The visas need to be year round so there is an incentive to hire more distant Central Americans.

As for the aid to civil society, the Trump administration should vet those organizations that work against economic progress and serve as fronts for socialist insurgents. In Guatemala, for instance, successors of the guerrillas from the armed conflict (1960–1996) have prevented firms from going ahead with development projects and undermined the rule of law.

Guatemala, El Salvador, and Honduras have no choice; they must work with Trump to curb immigration for their own good. It is a win-win and no-brainer. By funneling the aid to effective programs, they elevate the standards of living and plant the seeds for a more prosperous society. In turn, the United States defuses a migration crisis at the border and regains a solid footing with friendly nations in the south.